I played my round 11 league game against James M and his Eldar foot list, I once against rushed out of the house and left the camera. This leaves me without a real battle report but a couple things needed to be said. This was my second game against James this league, you can see the first one here.  James has redone his list into a foot eldar list lead by an Avatar and he was not looking forward to facing the two Heldrakes. It turned out they were the least of his worries. 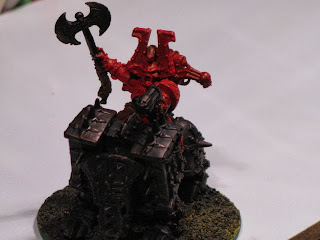 I added a Khorne marked Chaos Lord on a Juggernaut with an Axe of Blind Fury to my list for the 1500 point round. I field him with a group of khorne marked spawn. He did pretty good in the first game against Jim B but it didn't last. In the latest game he took two wounds, round one from dangerous terrain, then a wound from a krak missile, after he failed his 2+ roll to pass to a spawn and took his own last wound trying to use his daemon weapon. I rolled allot of ones. The flip side is James' wraithlord flamed my chaos marine squad three turns in a row, with two flamers, for a total of thirty hits and I think seventeen or so wounds and I saved all but one. The Evil Mistress of Probability Gives and Takes away. 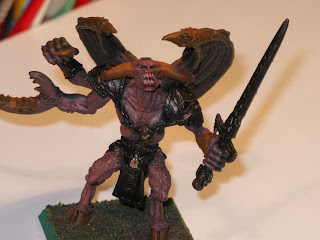 The Nurgle Daemon Prince with Black Mace survived a ton of shooting to make it into combat with a Dark Reaper squad, He challenged the Exarch and killed him with the hammer of wrath attack and didn't get to fire off the Black Mace's special ability. The next turn The Avatar moved in and disarmed him so no Black mace that round and the second round the Avatar finished him off before he could swing. Such feats are the grist of legends.

I ended up losing the game but had a great game and look forward to playing James again.