I have been talking to Chuckaroobob about playing some games using the Disposable Heroes supplement Seek Out, Close With and Destroy. It contains rules for more modern games. The basic in the book are the Falklands war and The Somali militia wars. Chuckaroo has a pile of Somali's and American and we have played several games over the years. Chuckaroo called me friday and informed me he would be hosting a modern game Sunday and I was invited.
I broke out Seek Out, Close With and Destroy and started planning. The one thing in the book I have been wanting to try out is the rules for the Ultra Elite Delta force teams. I sorted through my TAG (The Assault Group) African militia figures and selected out enough to use for a few Delta teams and snipers. I figured the points and gave Chuckaroo a call back this morning to see how much forces he wanted to field. After talking awhile I decided that I would paint up the figures to a base coat for tomorrows game. I added another fire team and two guys with Heckler and Koch Mp5s to use as helicopter pilots if one of the helicopters we are playing with gets shot down. 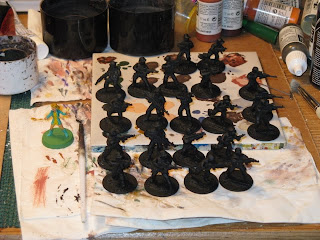 Here is the start. I have had these figures for years but have never managed to get them past priming. It is one command team, three fire teams, three snipers, two helicopter pilots and the one non combatant modern model I have an old Dr Who companion model. The companion was already painted so I just flocked the base and gave it a little paint. 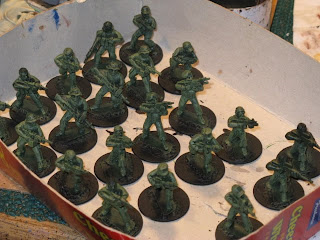 Next step everybody gets a coat of Vallejo military green. 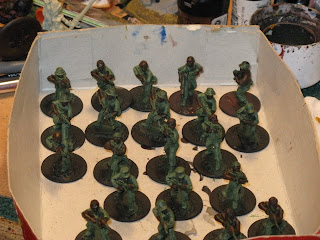 The I dry brushed everything with reaper master series olive green and all the flesh scorched brown. 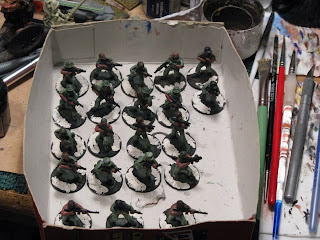 All the metal, canteen caps and leather boots get black. I then went back over the uniforms with a light dry brush of reaper master series pale olive. I had to add more putty to the bases to make them more irregular when I add the sand later. 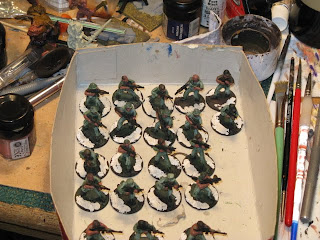 All the flesh areas now get a coat of tanned flesh. I then did a wash using my premixed chestnut ink and future wash. 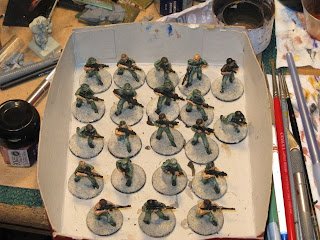 I then went over the flesh areas with elf flesh. I washed the flesh again and then glued sand to the bases. They are not completely finished but they are three colors, have a flocked base and ready for the game tomorrow. It took longer than the six hours I told Chuckaroo I could do it in but I did go get the boy and pizza, watched some TV and googled some info.
A teaser on tomorrows game.
Mogadishu, Somalia
Dateline 31 July 2015
An anonymous US State department official has confirmed that a missing Polish Journalist has been taken hostage by an undisclosed Somali Warlord. Negotiations have stalled and there are rumours of a possible military response to the kidnapping buy US and Polish military forces.
Posted by ColKillgore at 10:25 PM 1 comment:

Hi Kids, Here are some snaps from H-con, I didn't play in all these games but they sure looked interesting. We've got downtown Somalia (the Blackhawk is still up!), Pulp blimps facing off, Duke Siegfried's Islandawana/ Rorke's Drift, and a modern Congo 4 way game set in 2003. I'd like to point out that modern games are my new favorite. 3 of the 4 games I played at the con were set from 1975 to 2003. Not only are they fun, but it's positively scary how good my dice are in moderns! Usually my die rolls are worth about as much as a bucket of cold farts on a rainy day, but I'm here to tell you (and my opponents all agreed) my dice were vermillion plasma HOT! It was almost embarrassing! The only conclusion I can come to is: God/Fate/Kharma/Mother Nature/Darwin is telling me to keep playing modern games! I've set one up for this weekend, 25mm US vs. Somalis using Iron Ivan's "Seek Out, Close With, and Destroy." Now all we have to do is see who shows up to play.
By the way, that red explosion in the Congo game is the fuel drums going up. There was only one enemy guy hiding there, but it just seemed too Hollywood an opportunity to pass up. The AK's didn't get him, but the RPG did.

Posted by Chuckaroobob at 1:29 AM 4 comments:

I haven't had much hobby progress lately, mostly because of that pesky Life interfering. I have been contemplating which army I want to try to get painted and on the table for 8th edition. My aim is for a completely painted army, fun to play and can compete in the local tournaments.
First the two armies I have with the most painted models are the Empire and Vampire counts. I have played both of them extensively in the past and want to get a different army ready. There are also a couple players running Empire and Vampires locally and would rather add a variety to available armies playing.
First is the Beastman army. I have been in the middle of the revamp using the new Beastman book but I have hit a stand still. All of my lists I was building and painting models for will now play differently under 8th edition. I have once again been bitten by the edition change monster. I have been looking at fielding a couple of forty model horde sized bestigor units but they are unpainted. I probably will need to add more gors and ungors to field larger units of them. The more I think about it the more models I need to build.
While I haven't been working on the beasts, I have done some work on the Dark Elves. I have been collecting Dark elves since 3rd edition and I still don't have a fully painted army. I have a bunch of models but it now seems that the unit to field in 8th ed is the Black Guard. I have Corsairs, Witch elves, warriors and more but of course I never really dug the Black guard so I have very few of them, probably not enough for a basic unit. I am thinking about either picking up some of the older sculpts or just converting them from a bunch of unassembled spearmen I already have. The other no brainer is a couple of hydras, and yes, I am prepared to go beyond the pale and field ringer units. They will only get one shot of their breath weapon now but they can still tear up a unit. Another option is to go with the corsairs with two handbows and run them 10 wide. With volley fire ,once they get into range or when they get charged, they can put out 40 shots. I am still figuring some possibilities.
Next is my Ogre Kingdom army. I played the army in the last warhammer league and still have a some ideas about conversions I want to do. With the new edition allowing monstrous infantry to fight with full attacks in two ranks a group of bulls can put out some pain. I will probably have to pick up some more gnoblers and a few other odds and ends but I have the majority of the models already and just need to come up with a list to get started.
One army that will be more of a theme list is Orc and Goblins. My main idea for the army is three blocks of fifty Goblin spearman at the core. Of course with the new one inch spacing between friendly units it will take a minimum of twenty six inches of table frontage just to put them down. That is as far as I have gotten in building that army but it would be neat.
The last two are High Elves and Skaven. I am thinking about these mostly because of the new starter box is going to have models for these two armies in them. I have to core of both armies already but little is built and none painted. They would both be bigger projects but the models are slick and both will be competitive.
The bad is I will probably start working on a different army than any I am thinking about now, so we will see.
Posted by ColKillgore at 8:55 AM No comments:

I made a trip to Lowe's and picked up the parts for the Gargant internal frame. The two tee's at the bottom will eventually be the feet. The top two tee's will be the internal shoulders. Using a bushing they will connect with the two top black tee's to form the outer shoulders on top of the arms. The last two tee's will form the elbows on either arm. I have one inch pipe to connect the internals and two inch pipe to from the arms. I haven't decided on the final weapon load but I will need to have the internal parts ready either way. 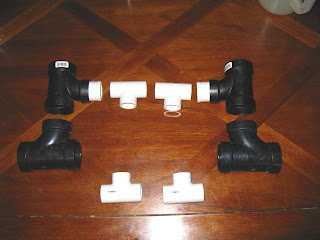 The next step is to mock up the Gargant and figure the measurements for the pipe sections. Once I get the foam base cut and fitted into the bottom of the Gargant lower hull I can mount the two internal pipe sections that will run from the feet, through the foam floor, through the top of the Booda dome and into the internal shoulder tees. These tee's will be inside the top hull and pipes will go from them, through the sides of the top hull to the arm shoulder pieces.
My thoughts on the weapon load are leaning toward a shooting Gargant with two ranged weapon arms. I have pieces to build a close combat arm and eventually will but I think that in most Apocalypse games the size of the Gargant will prevent it from moving any distance. I do look forward to a big game and seeing the Gargant go toe to toe with a Warlord titan one day but I have to get it built first.
Posted by ColKillgore at 8:38 AM 1 comment:

Rise of the Gargant

I have been bitten by the Ork bug again. The talk of an Ork vs Everybody else themed Apocalypse game has me breaking out my collection of bitz to build a Great Gargant. The major piece I plan to use for the Gargant's torso is this Booda Dome. I found it in a trash pile on the side of the street a couple years ago. I have kept it waiting for the day It will rise and terrorize the Apocalypse battle fields. 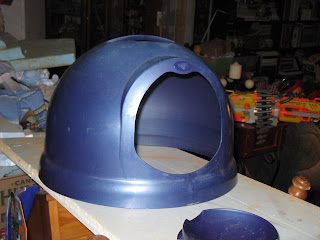 The main opening will end up being the back with a large armored assault ramp. My original plan is to use foam as the floor but I am thinking about mounting a wooden or metal floor in the bottom and then use it as a model transport. 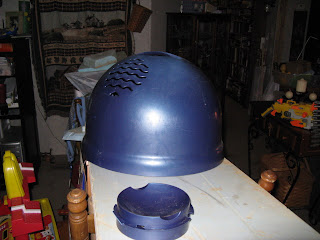 This side will end up being the front. I am planning to cut a four inch hole just below the vent. This will eventually hold the belly gun. The dome is about eighteen or so inches across and it is going to be a big model. I will use the BoLS Lords of Battle Vol2.0 datsheet for the Great Gargant to plan its equipment.
It is very much a work in progress but I think I can get the majority of it together rather quickly and then take some time on the detailing.

Posted by ColKillgore at 10:17 PM No comments: