Changer of Ways and Flamers 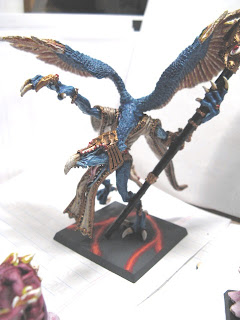 Here is a blast from my past. These are some Daemon figures I painted for my friend Tuna. I just repainted the bases to add the Lava effect. I am in the process of finishing up another bunch of Tuna's models. I will post up more pictures as I finish them. 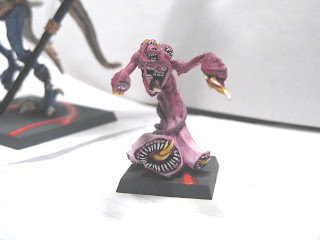 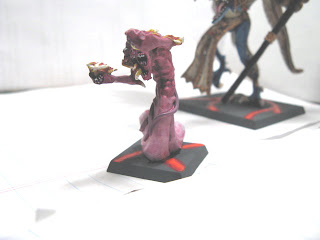 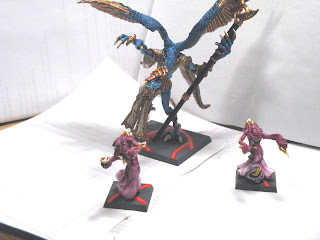 Posted by ColKillgore at 11:21 PM No comments:

40k Sunday At the Castle

Went to the castle Sunday to get in a game of 40k, deliver the Plague Towers for my friend Chris H. to use in an Apocalypse Battle and pick up one of the new Dark Elf Battalion boxes I traded a bunch of chaos marines for. I showed up early and Windancer was a half hour late opening the store.
The new Dark Elf models are snazzy, especially the new cold ones. I want to get about 14 or so of them to mount up some metal cold one knights I have that are missing their mounts. I bought the metal knights thinking I could order up the plastic cold ones but when I went to put in the order it was a week after GW had stopped selling individual bits. I have been sorting through my Dark Elves and planning for the day I get the new Armybook.
The Apocalypse game was the final battle in a campaign Chris H and Alex have been playing over the last couple months. It was Chris' Plague Marines verses Alex's Death Korp Kreig forces. The PlagueTowers were a surprise and ended up ruling the day. Another major factor was because of Chris winning the previous battle in the campaign he was able to choose whether to play using night fight rules or not. Chris chose night fight and this cut down on Alex's firepower immensely.They Played 5 full turns and called the game, with Chris winning. The batle went exceptionally well considering that no one in the store had a copy of the Apocalypse rulebook and had to play from memory.
I played a 700pt game using my Plague Marine against a guy (whose name I forget, oops) orks. He was just starting the his ork army and only had 700 points assembled. We played a full six turns and the game ended in a draw, with neither of us controlling any odjectives. It was a real fun game but i am still trying to get the 5th ed rules right. I kept adding in 4th ed rules that have either changed or been done away with.

As if I didn't have enough irons in the fire, I put together a Warmachine Cygnar Sentinel and flocked it and some gun mages bases. When I went to put the Warjack together I had lost its head. So I ended up making a new one from a chaos warrior head and some green stuff. I have been thinking about building some of my Warmachine figs since talking to some active Warmachine players at the 80k of 40k Apocalypse battle. they have a group meeting regularly to play and I figured since I already have the figures, I might as well assemble them. I bought them when Warmachine hit locally and it seemed like everybody but me was playing. I played several games with other peoples figures and liked it, so I bought in. When I had enough figures to field a nice sized force the bottom fell out of local interest. Into a box they went. I bought some more since them mostly planning to use them in VSF games but it looks like they may see the battlefield yet.
Posted by ColKillgore at 11:47 AM 2 comments:

Here are some pics of my buddies Tuna's Brass Scorpion I have been painting for him. 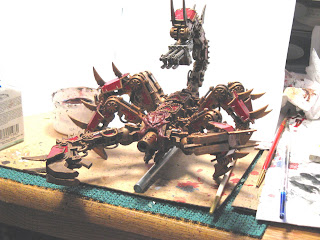 This is the model he used in the 80k of 40k Apocalypse battle . I have a bunch of thousand sons and some flamers waiting to be finished. I have also been working on a bunch of AWI Highlanders for another friend of mine. On the good side I have finished up fifteen Soviet Heavy Machine gun bases for my Flames of war army. They have been setting on the painting table half finished for six months or more. My goal of painting a thousand figures this year is a long way off. The Soviets are the first models I have completely finished painting since February.
Gaming wise I have played in a The Sword and the Flame game at the BOHM. It was a French versus the Arabs with Prospector Bob thrown in on the french side as a Victoria Cross Winner and Major Von Kracken on the Arab side with side unit of Stormtroopers. It was basically a punitive raid with the French goal to occupy/burn the village and the Arabs to stop them. It was a fun game but the French ended up withdrawing in good order but unable to seize the main village.
I also played a Flames of war game at the BOHM. It was a Soviet/American team(CharlesK,Patrick and Me) verses the Germans(JohnB andJerryW). I fielded my Strekovy Batalon for the first time since I finished painting them and had a good time. All of us were a little rusty on the rules, it had been awhile since the last FOW game. The Germans ended up winning but it was a close run thing. I tried using flame tanks for the first time and the jury is still out. I am thinking about making a couple of sniper bases to see how they work out. This is what inspired me to finish the Soviet HMGs. I have been debating what to add to the Soviet army next. I have more infantry, a storm group, a Smg platoon and a Gods of War Artillery Battalion. I am leaning towards to Smgs and Stormgroup especially if we keep playing mid war.
I am planning a trip to the Castle tomorrow to pick up the new Dark Elf Battalion box I tade for with a friend of mine. I am taking the plague towers for him to use in an Apocalypse battle and may take a 40k army to try and get a game in using the 5th ed rules. 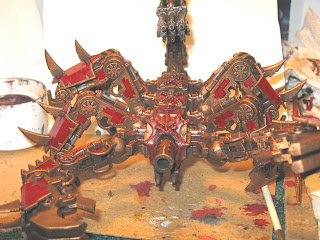 Posted by ColKillgore at 1:04 PM 2 comments: