Just when you thought it was safe... Pax Limpopo!

Yep, just to show everyone it's not all ultra-serious hardcore monster games like "Le Bataille de Whatever,"  "Highway to the Reich," or double blind "Flattop," those Monday night lads sometimes let their hair down and dig up the weirdest stuff imaginable. This should really come as no surprise from the lads who brought you "A Fistful of Turkeys" and "Globbo" con games!  (Converted to miniatures of course!)  Last week it was the ole "Pax Limpopo" game "Pig Tickler" from Eureka Miniatures.  Its a game of Lancers riding unicycles chasing a steam powered pig all over the map.  Of course, the pig can fight back, and there's an ump and a stoker to get in the way and interfere as much as the other players can make them! 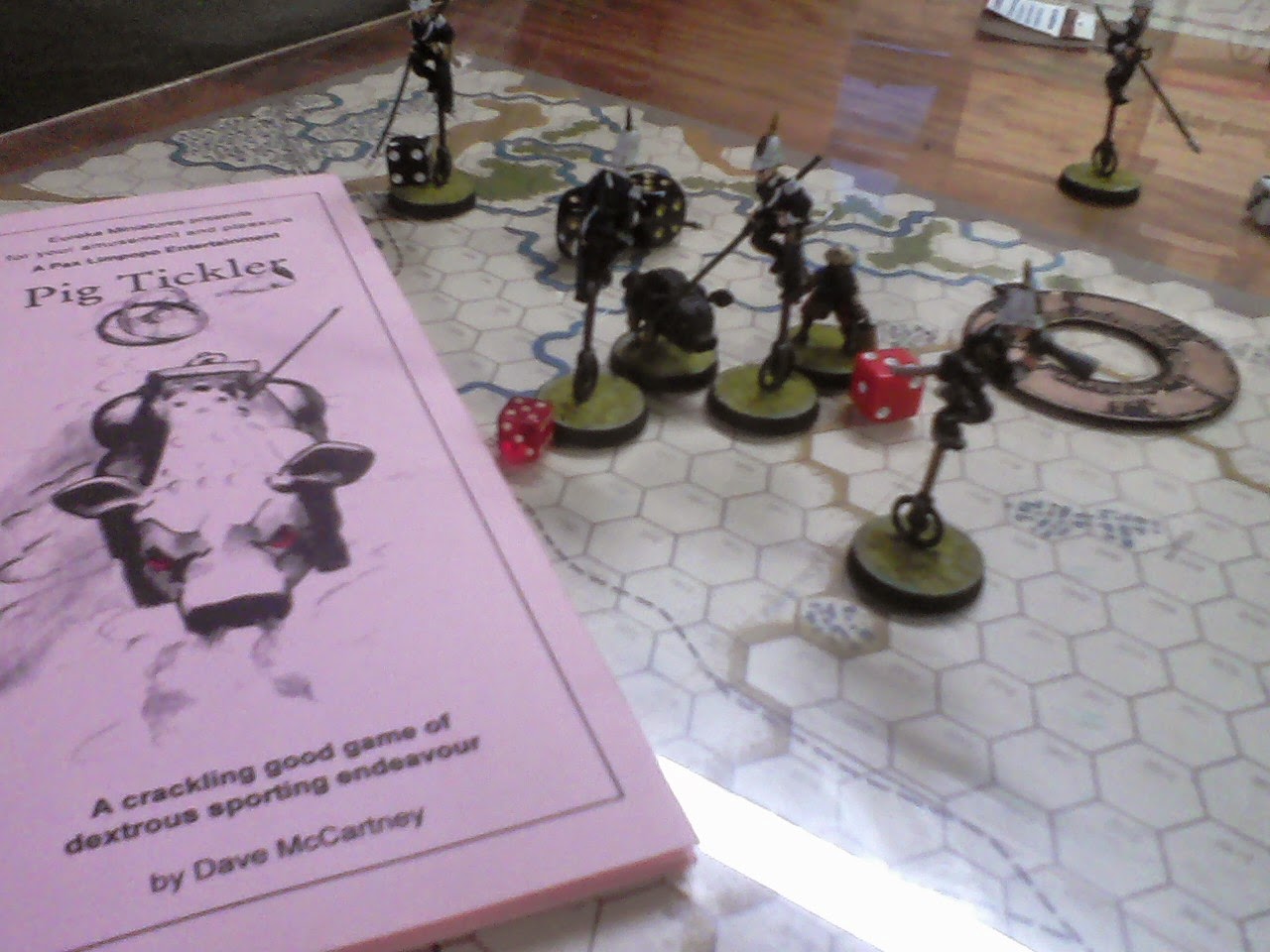 Your humble correspondent was the manager of one team, and managed to crush the competition by a 10 point spread!  I owe it all to my time riding a Yamaha V-Max motorcycle! My opponent failing to activate 3 turns in a row might have had a very slight effect on the game too.  You never know...

All this stuff came in a numbered box signed by Nic and Dave. I'm telling ya, those lads at Eureka can come up with some awe-inspiring stuff when they have a mind to do so.  I might just have to paint my all my Eureka dinosaurs! And I still have my "Native Women With Chicken on Head" miniatures too, if the Basement ever decides to reveal their whereabouts.
Posted by Chuckaroobob at 10:52 PM 1 comment:

Game Theory Store in Raleigh with the TSS Lads

Hi Kids,  Last Saturday was one of the Triangle Simulation Society's game days, this time the hosting store was Game Theory on Highway 70, aka Glenwood Avenue.  Only about 8 kids showed up for a couple games of Low Level Hell and Dwarves vs. Goblins.

The first game was run by the World Famous Bruce, using 20mm figs and helicopters and loads of jungle terrain for Vietnam.  Each player got a copter of assorted varieties: Hueys, Gunships, and Cobras.  I got a troop carrier and turned out to be the commanding officer!  So naturally I had to speak like John Wayne/ Robert Duvall and use the callsigns "Bulldog" and "Big Duke 6." 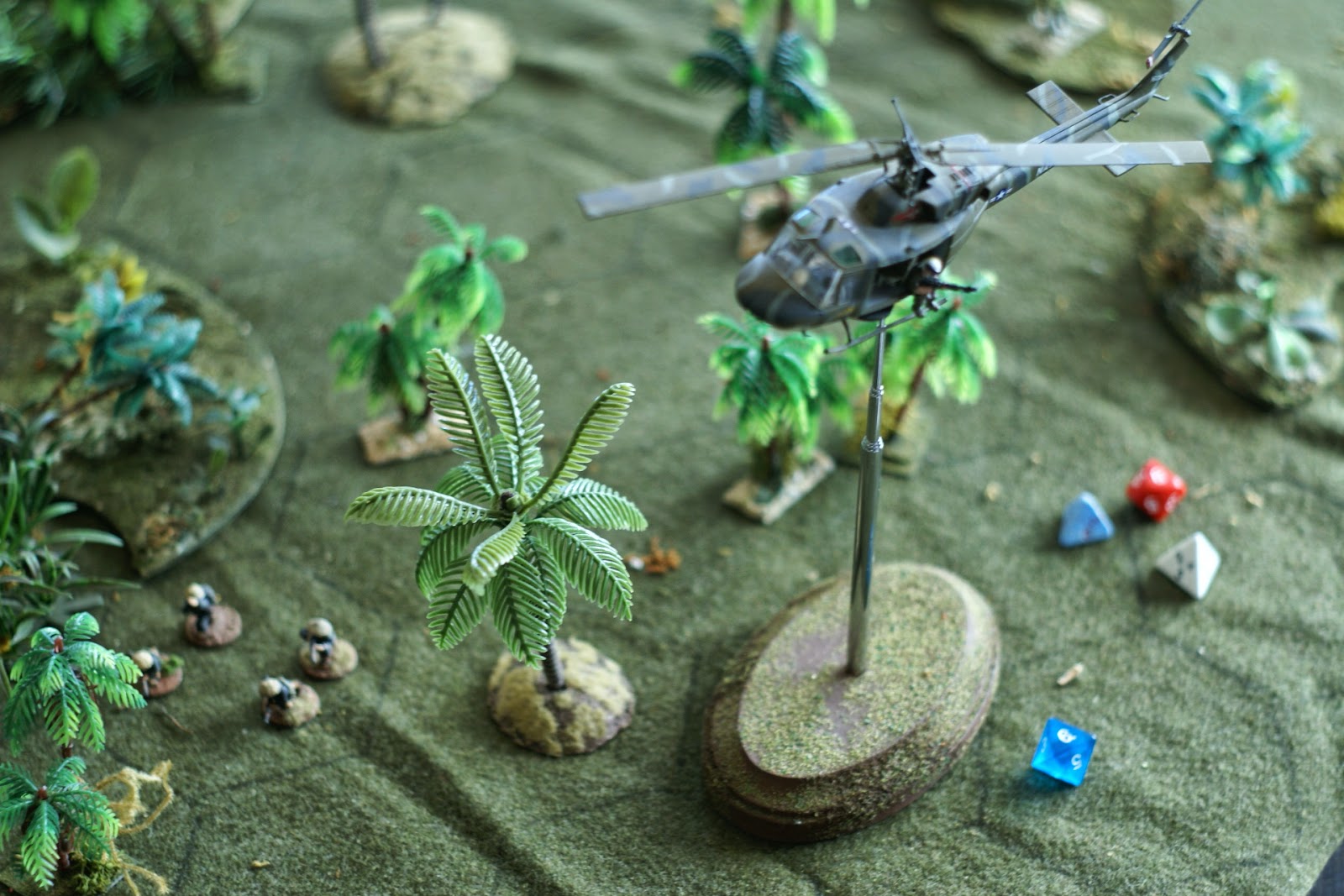 Here I am going in fast and hard, giving Charlie the gun!  All the VC figs are controlled by the guy running the game.  Regardless of the amount and type of dice I rolled, the most I could accomplish was scaring the trees.  Partially with wild shots, mostly with wild flying! 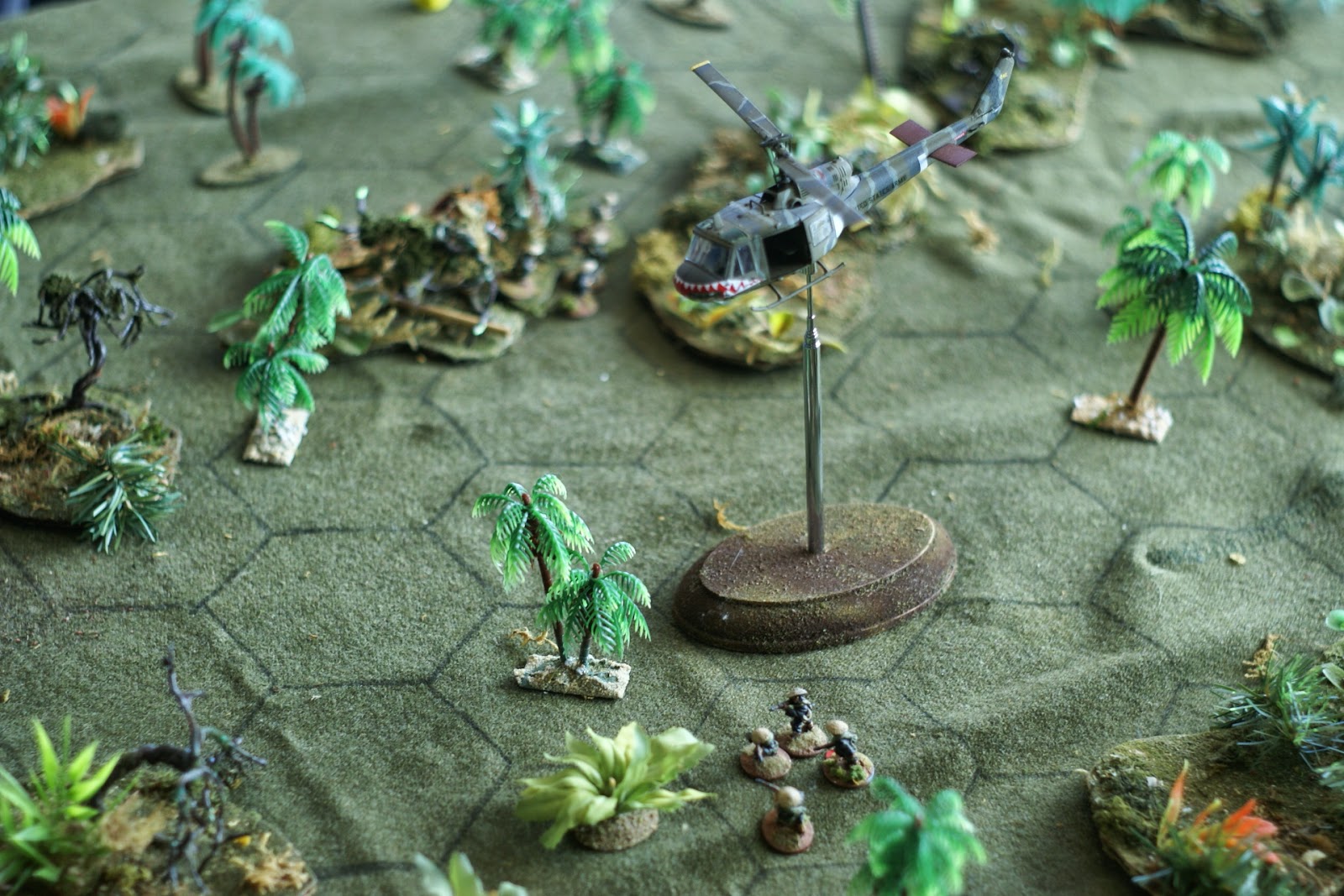 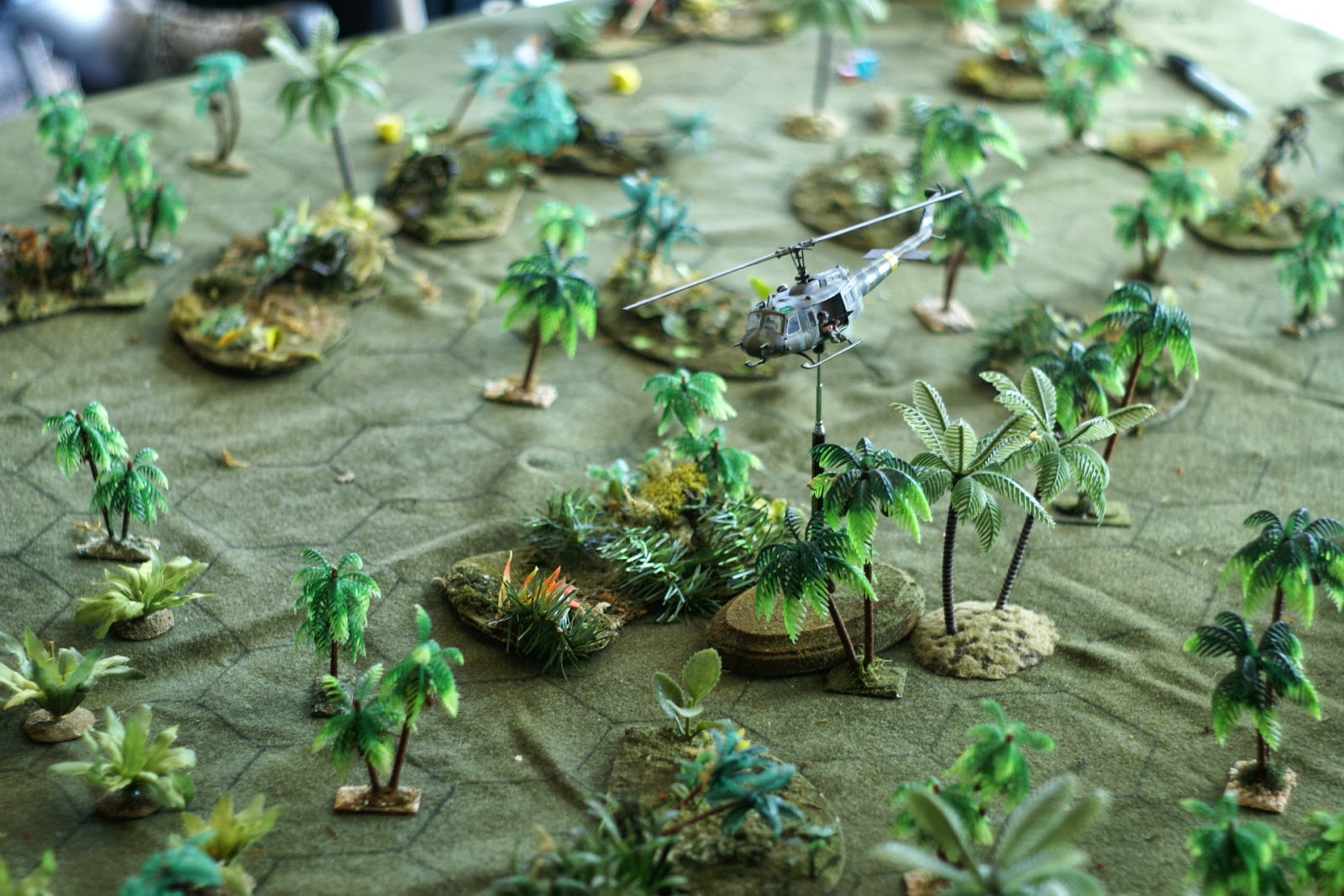 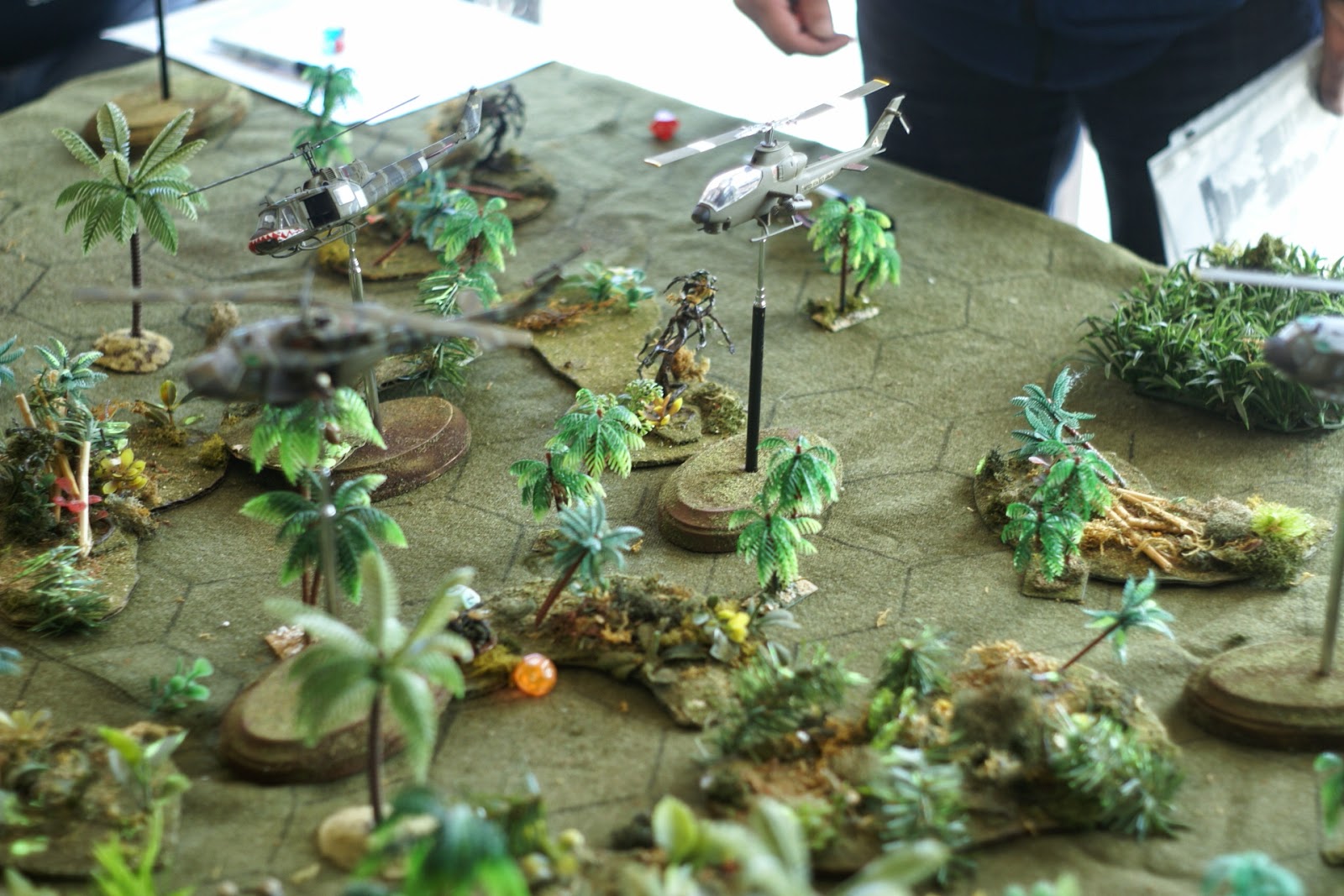 World Famous Ollie was flying a Cobra, and the kid was hot!  Just about everytime he touched the dice he was wiping out entire enemy squads!  Most of the time he didn't even get to resolve the rocket fire, his grenade launcher and MG's took the enemy out before the rockets hit! 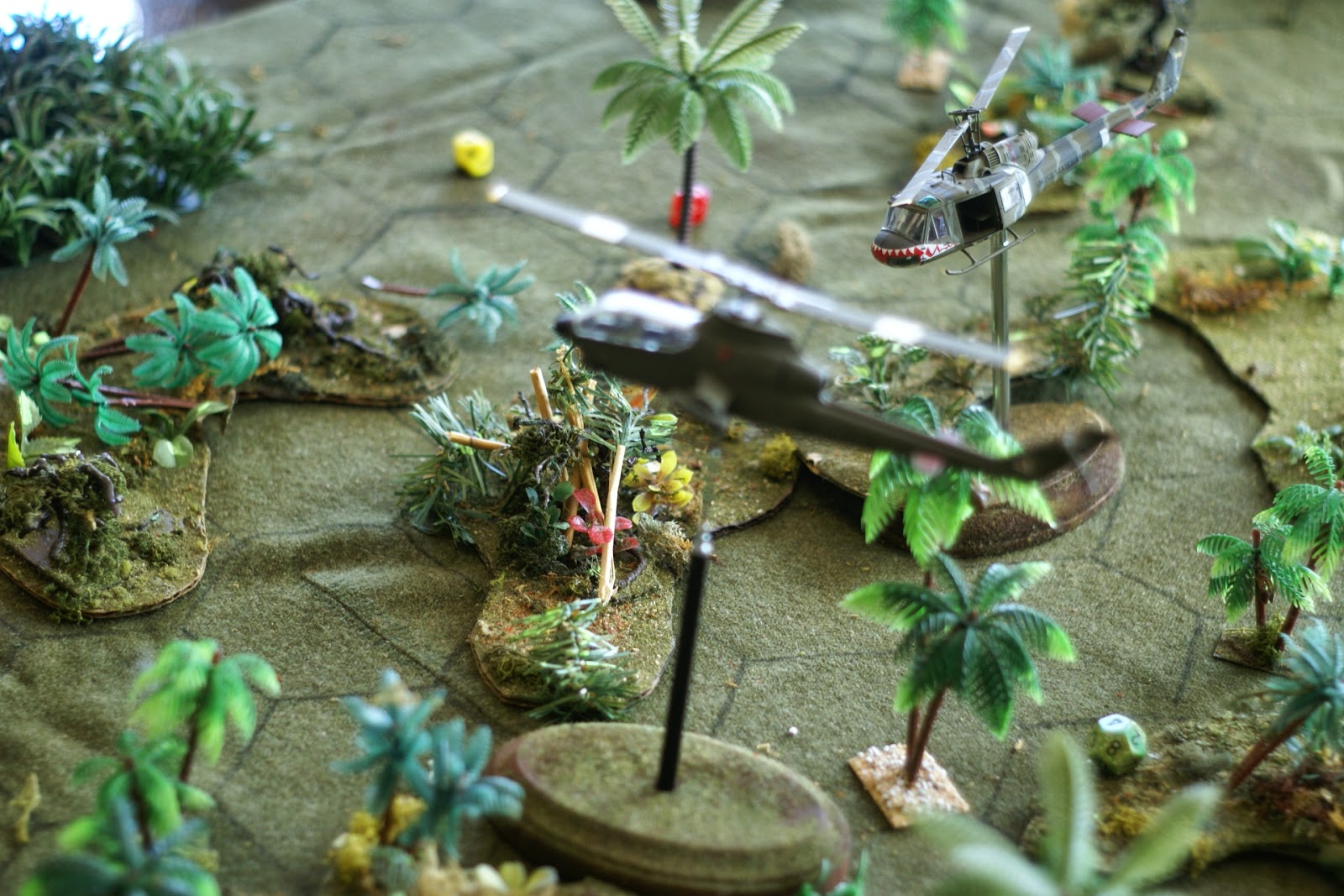 We managed to pick up and fly out two chopper loads of troops!  Everyone got out safely! 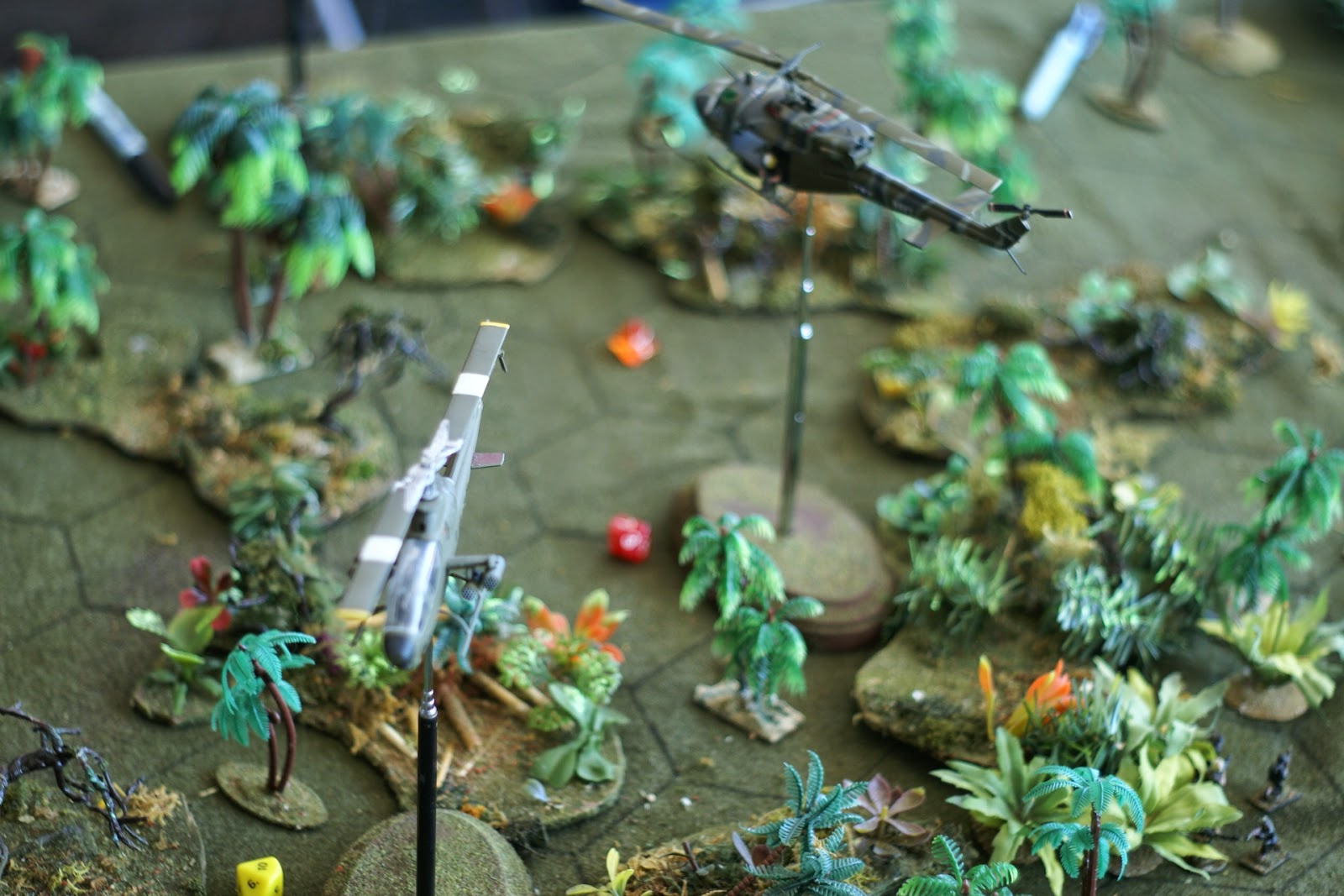 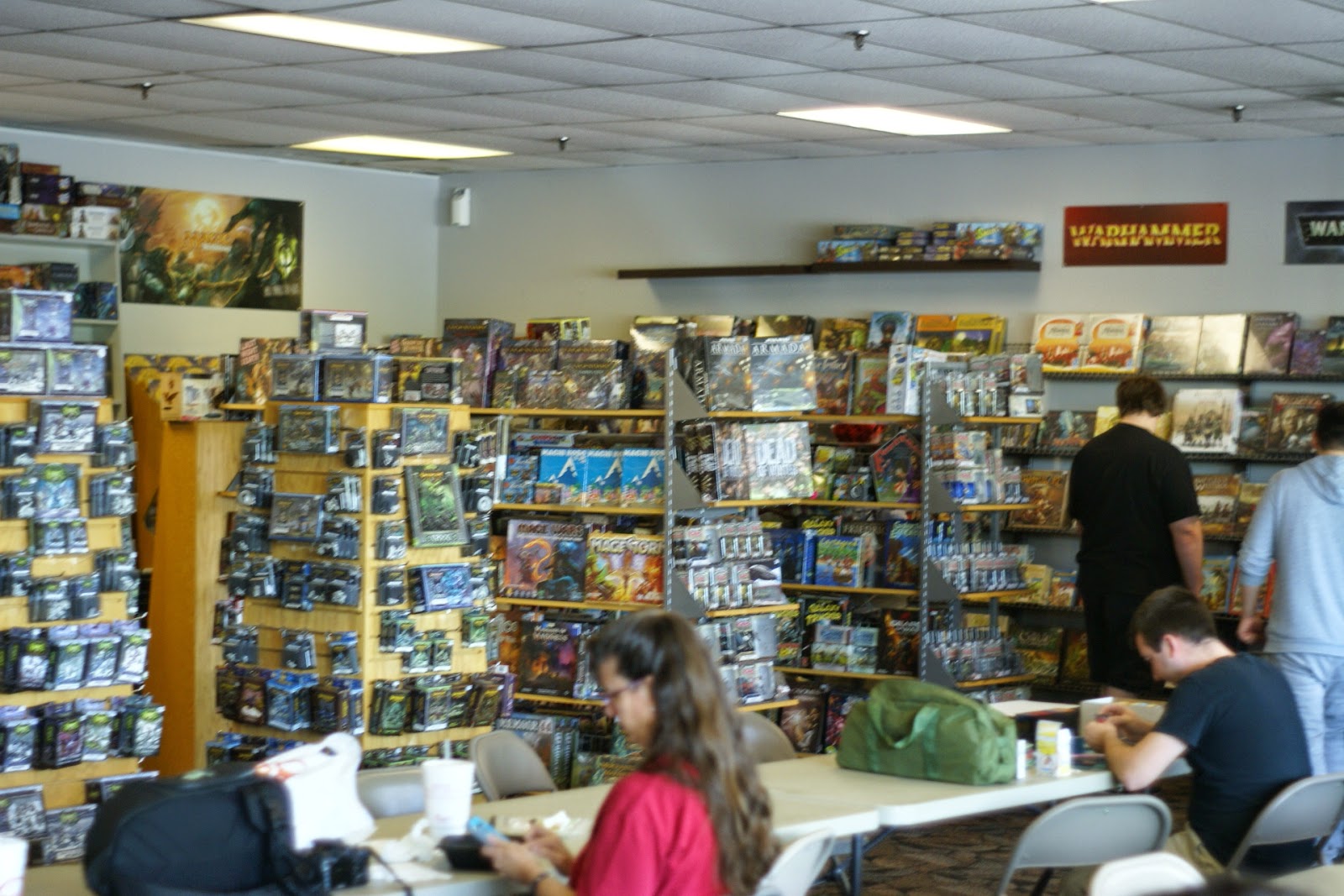 The long view of the store, lots of Warmachine / Hordes, RPG's, CCG's and boardgames!  Yeah, they even had some GW stuff on hand! 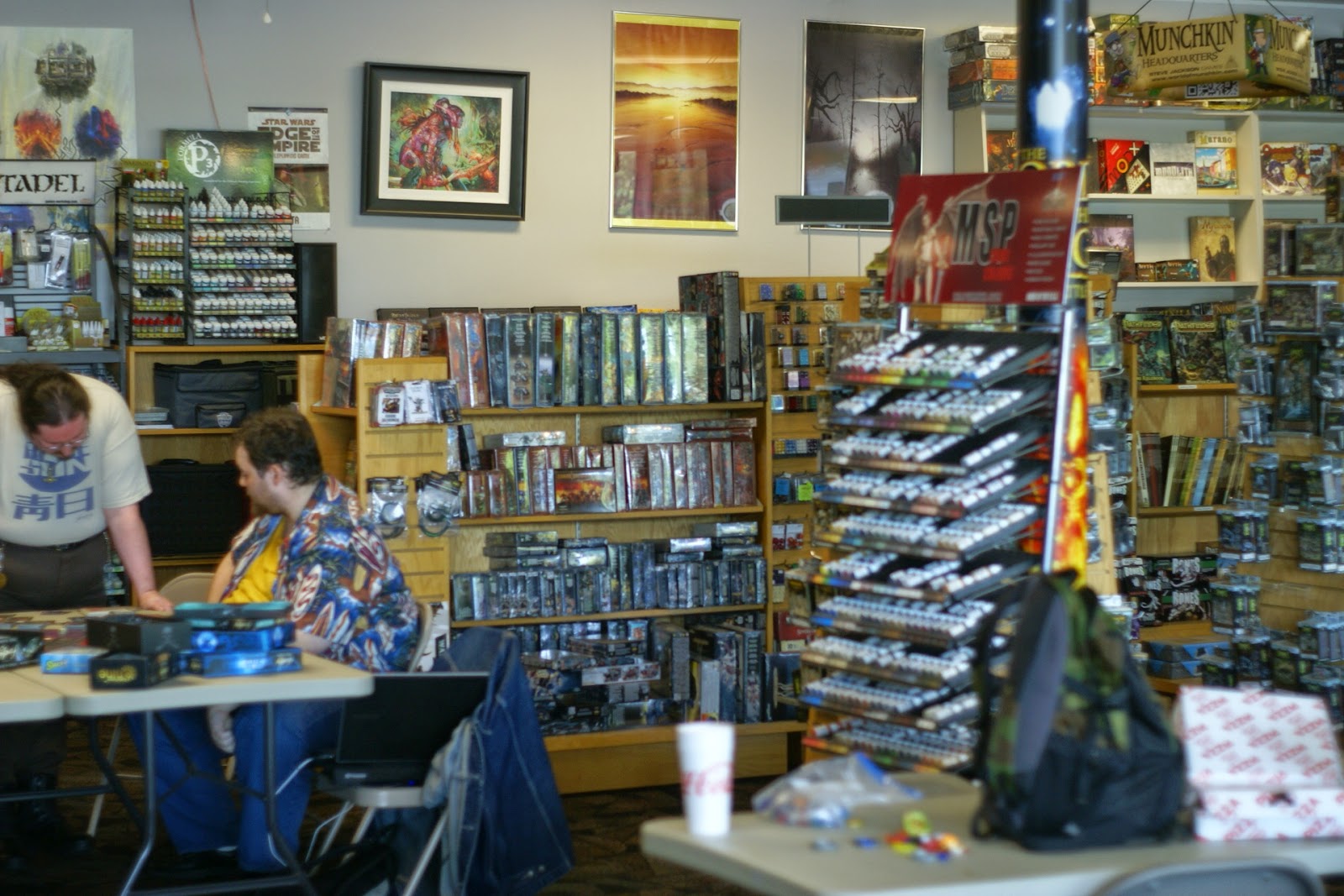 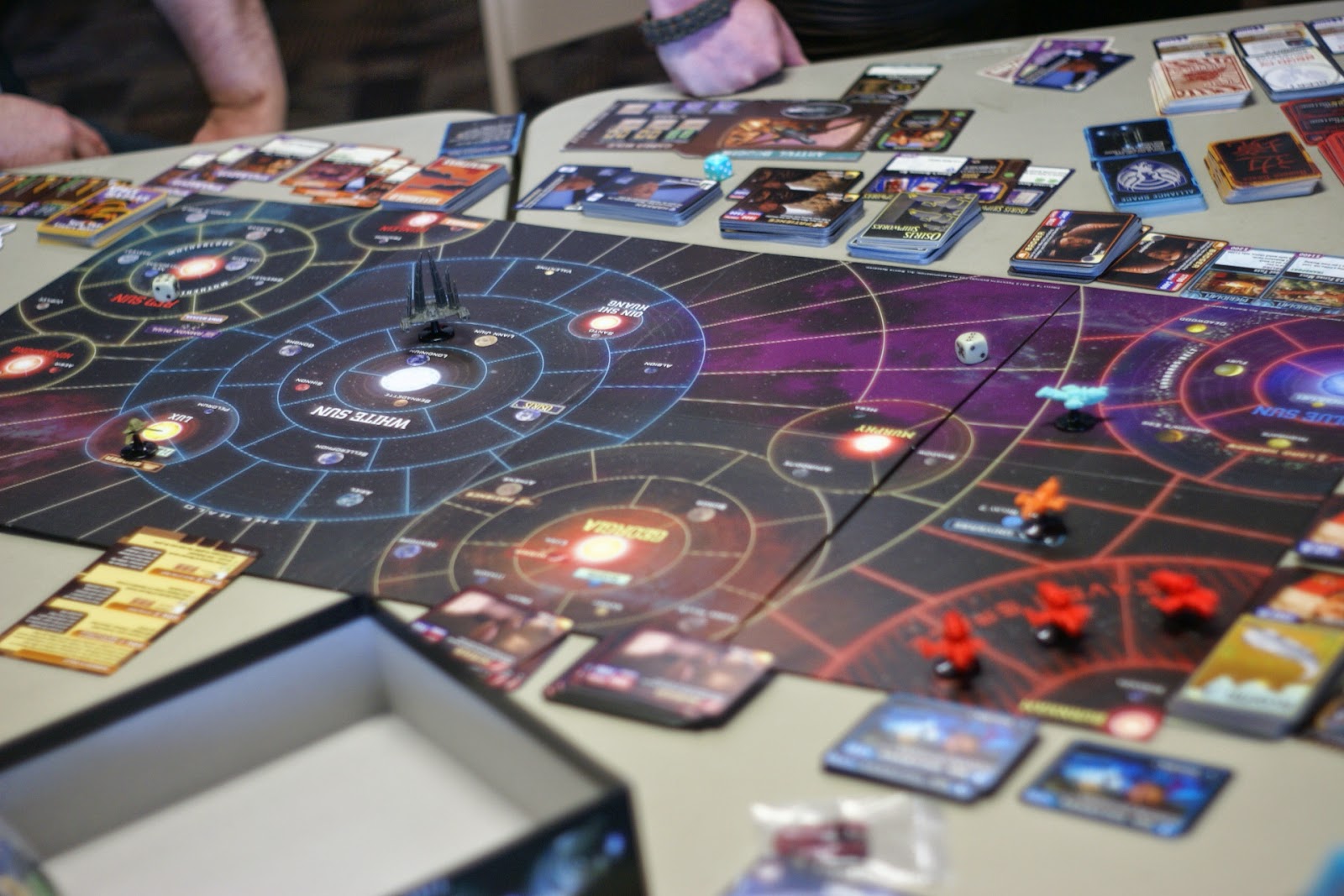 Combat in space! The TSS lads weren't the only game in town, there were abot 30 guys playing some kind of combat tops, space games, and X-Wing! 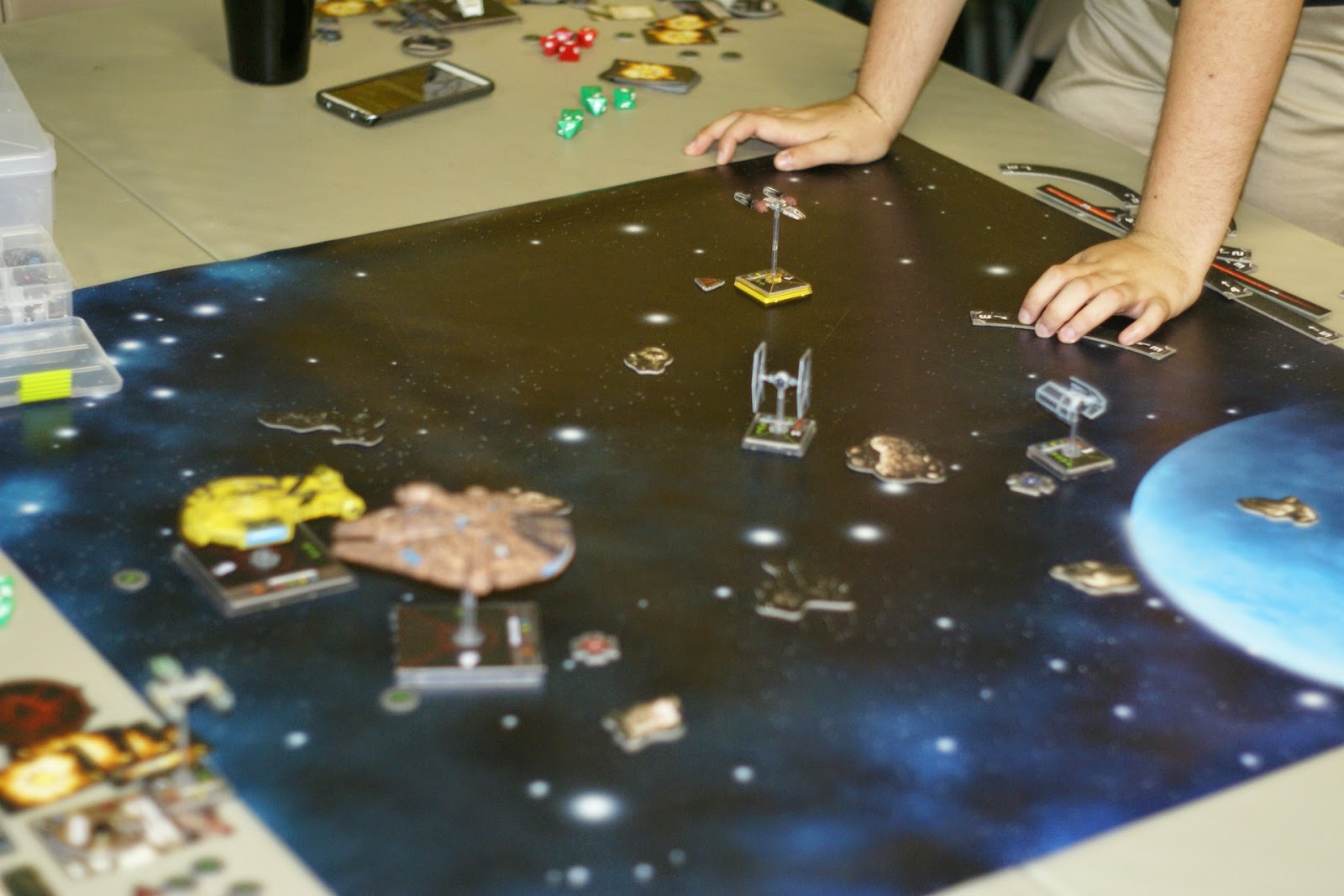 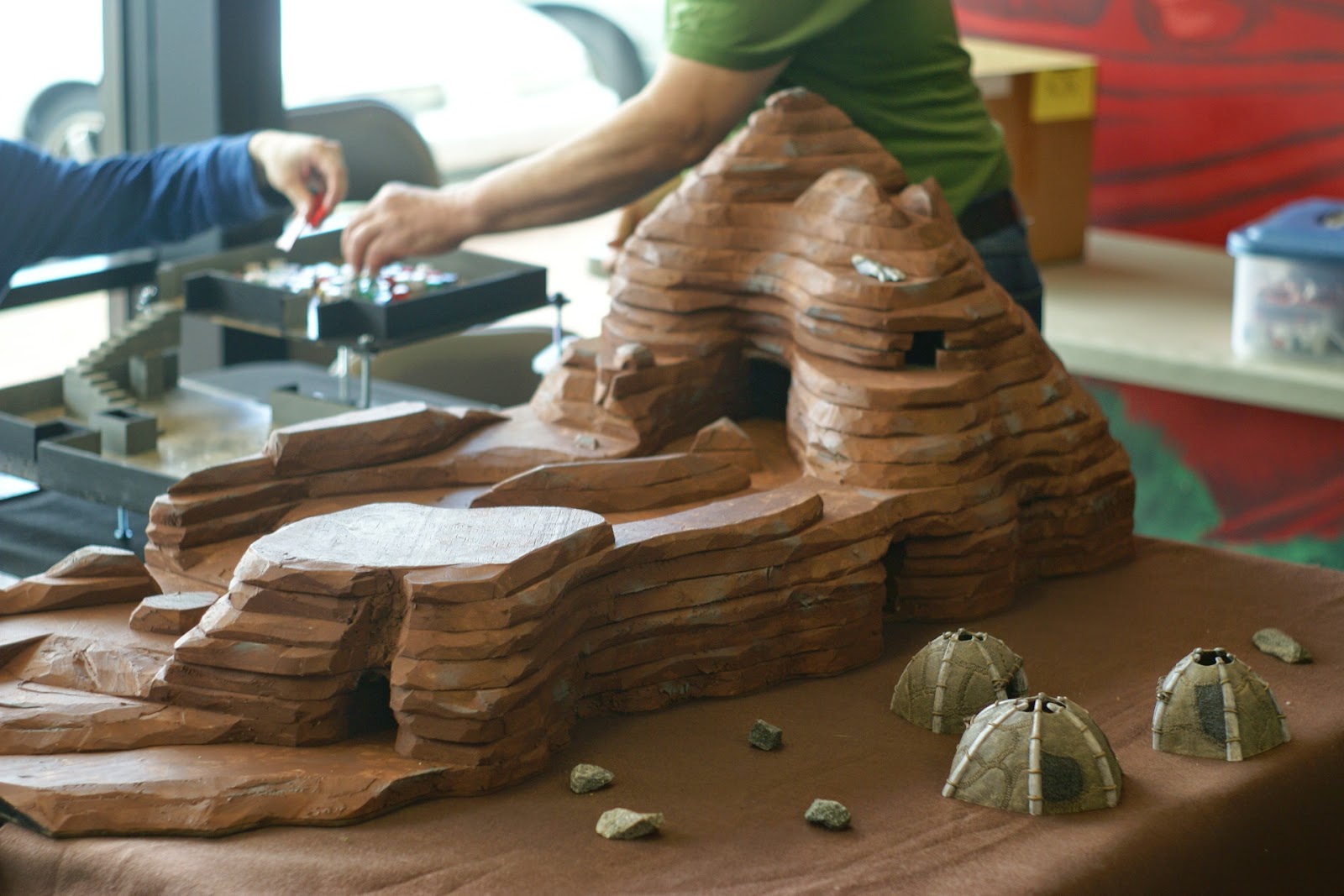 The world famous Dave sets out his custom built mountain mine terrain.  The Goblins controlled the mine, the Dwarves were raiding it!  On the left of the picture you can see the underground rooms, set out to correspond to the entrances in the mountain.  Home rules, very skirmishy, very quick! 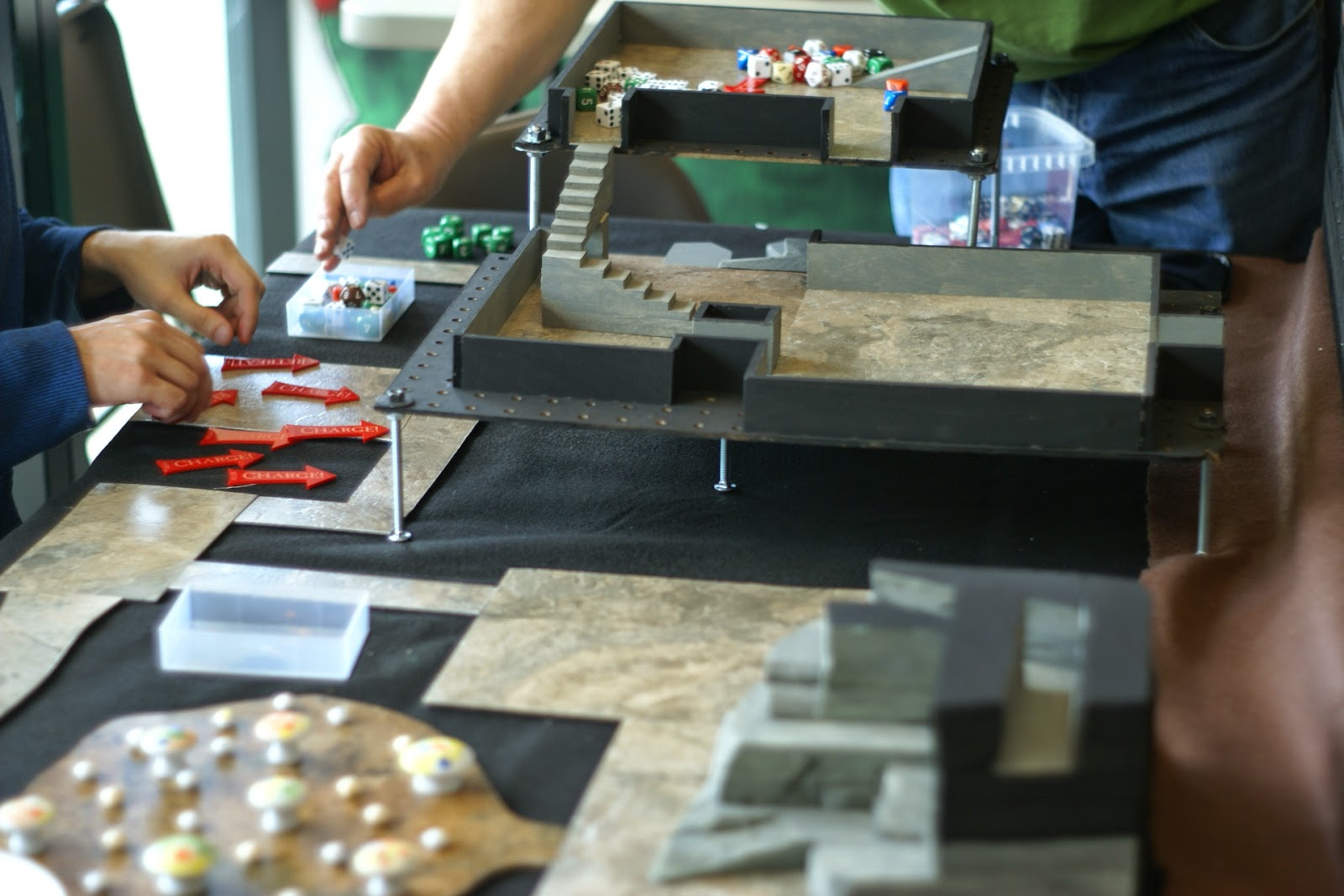 A better look deep inside the mines! The mushroom farm was a victory objective. 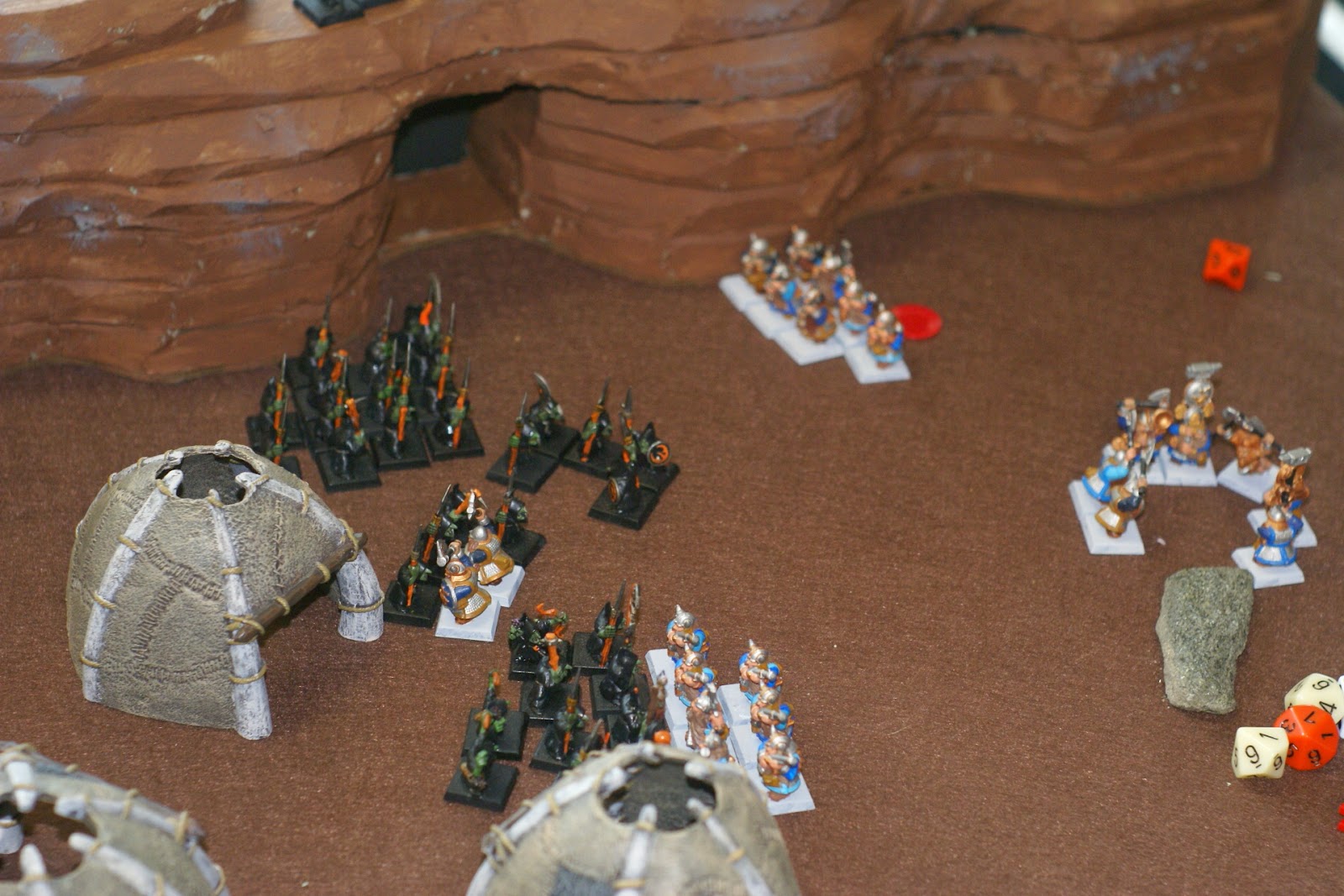 The Dwarves approach the main entrance, defended by hordes of Goblins! 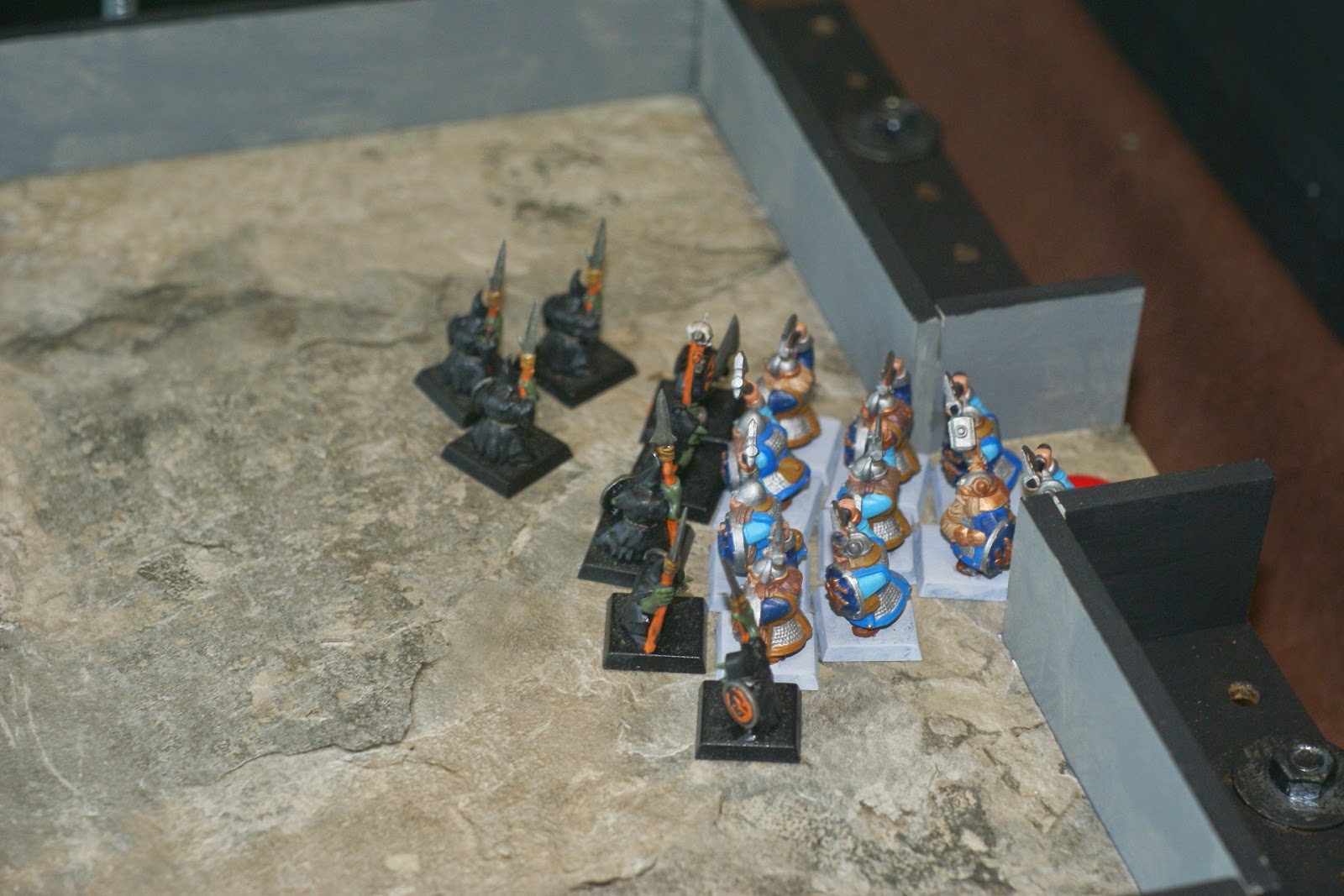 One unit breaks off and dashes inside the mine! 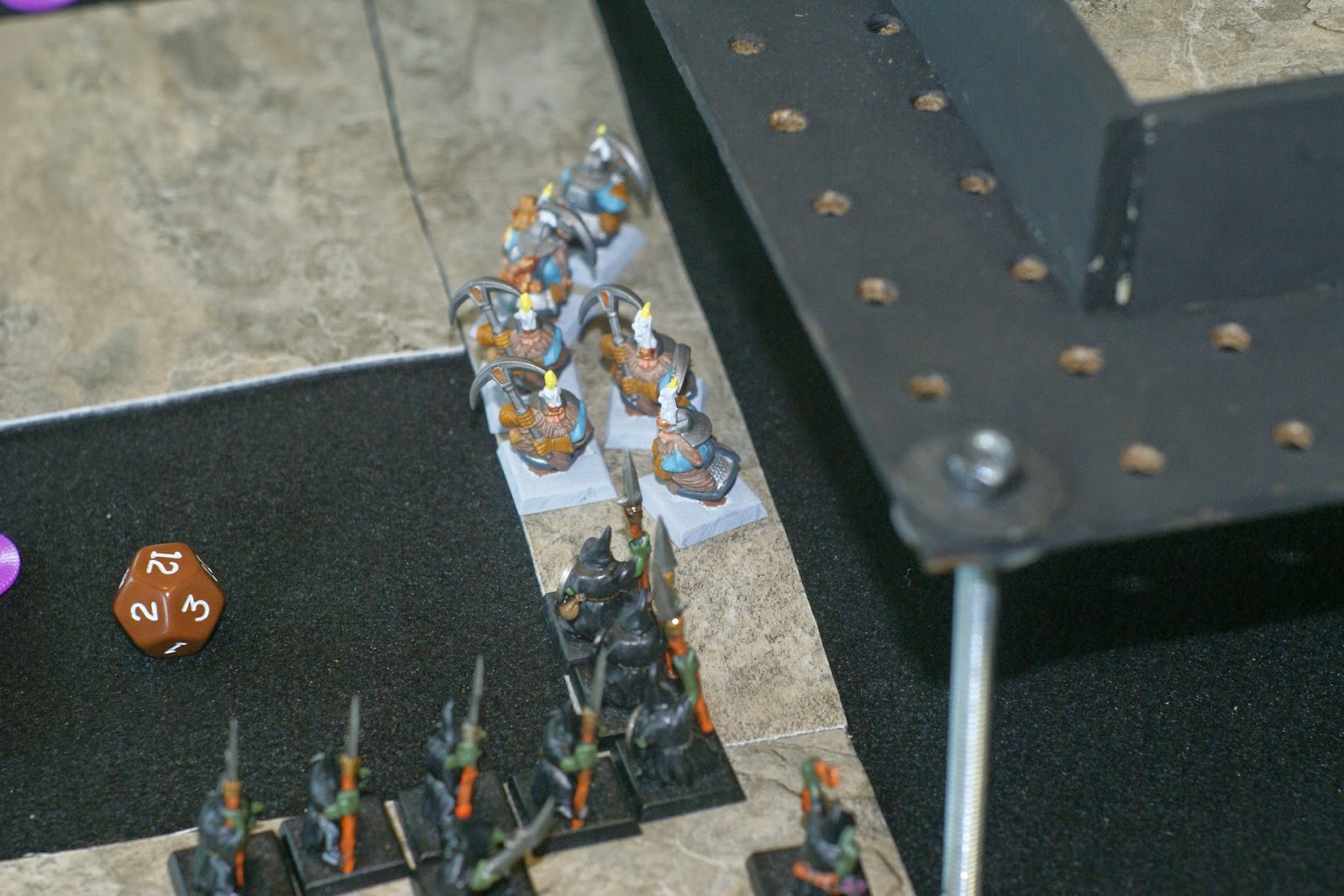 While some miners have managed to tunnel in! 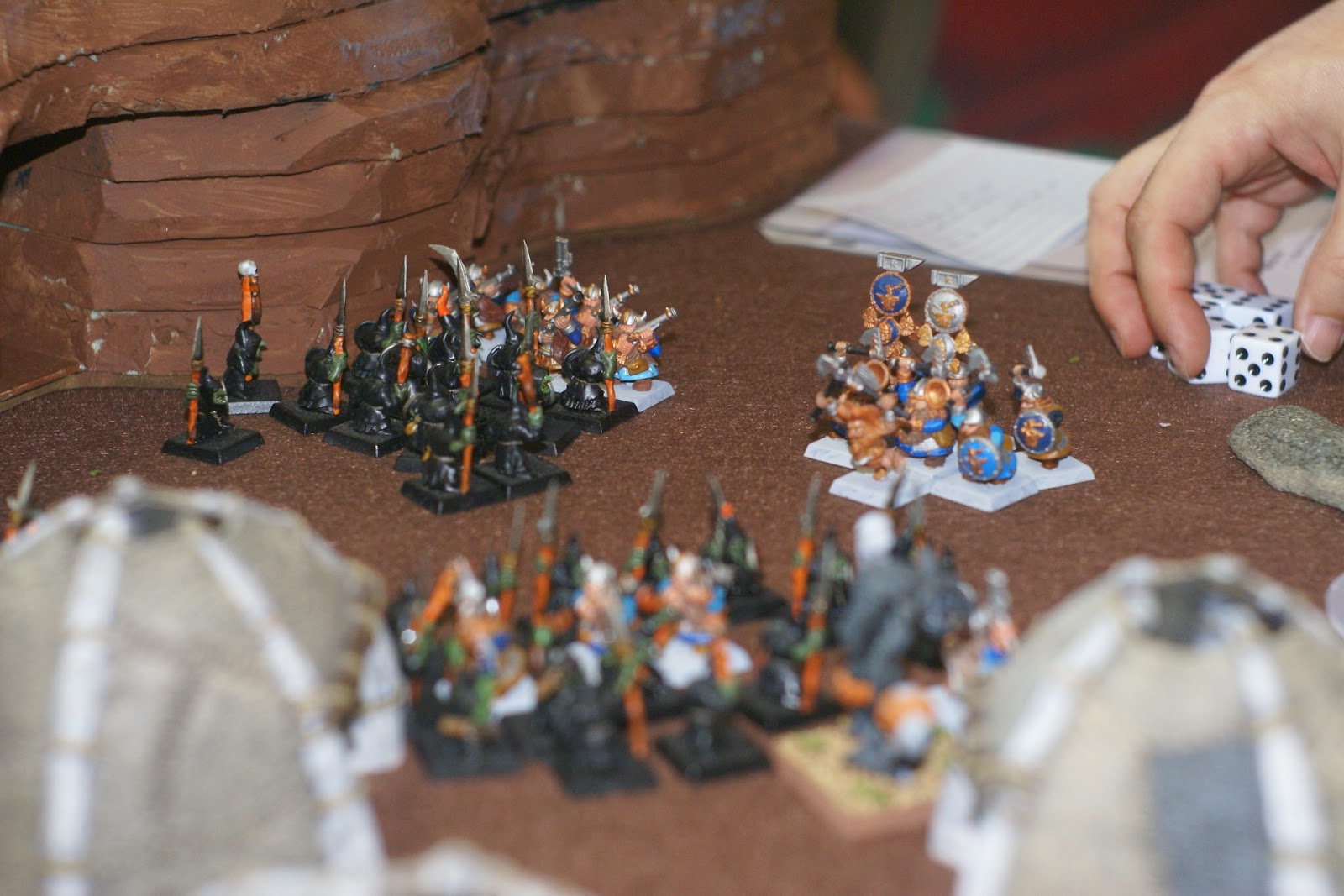 Yep, that's a troll, fighting on the Goblin side! 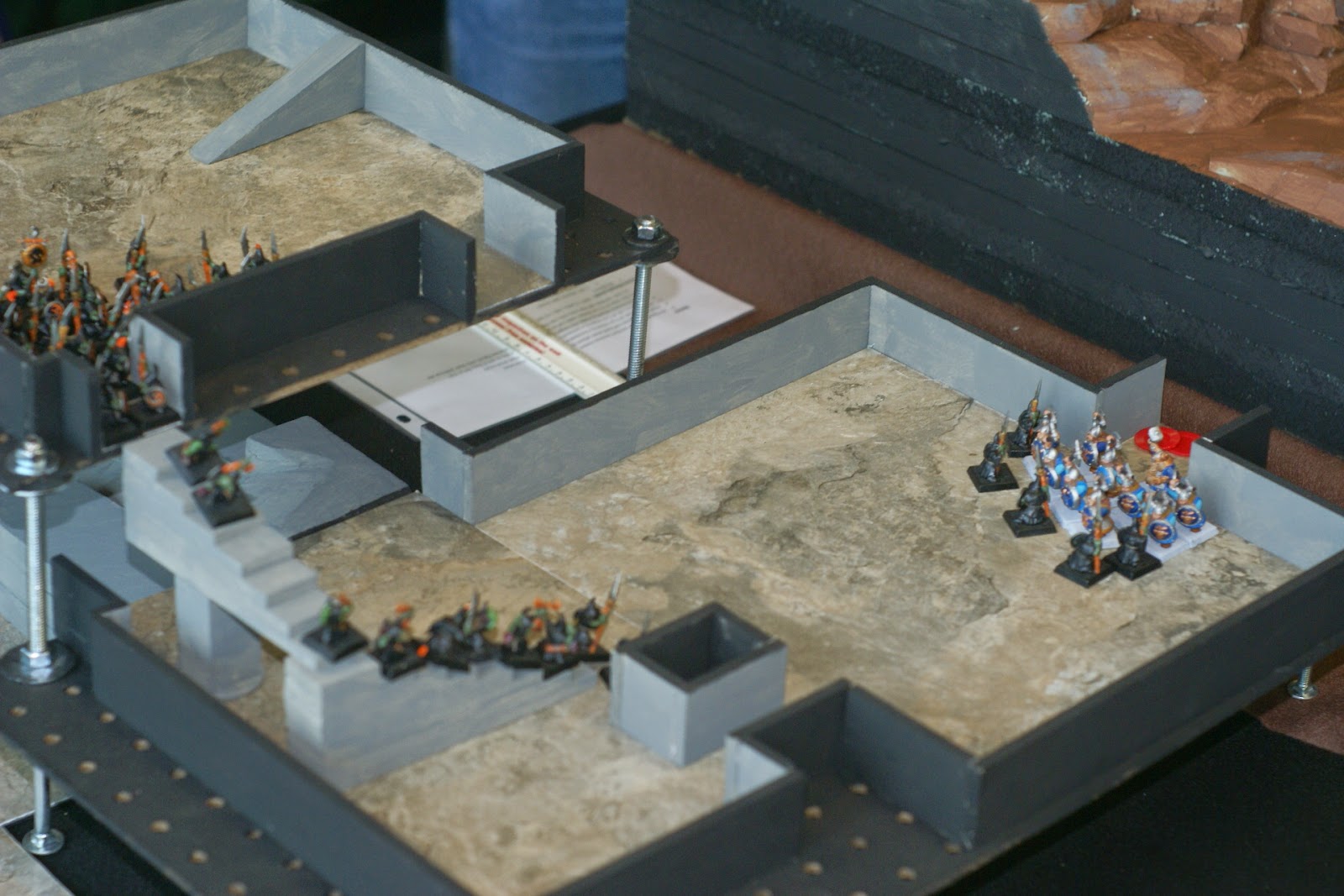 More goblin reinforcements rush down the stairs to fight off the invaders! 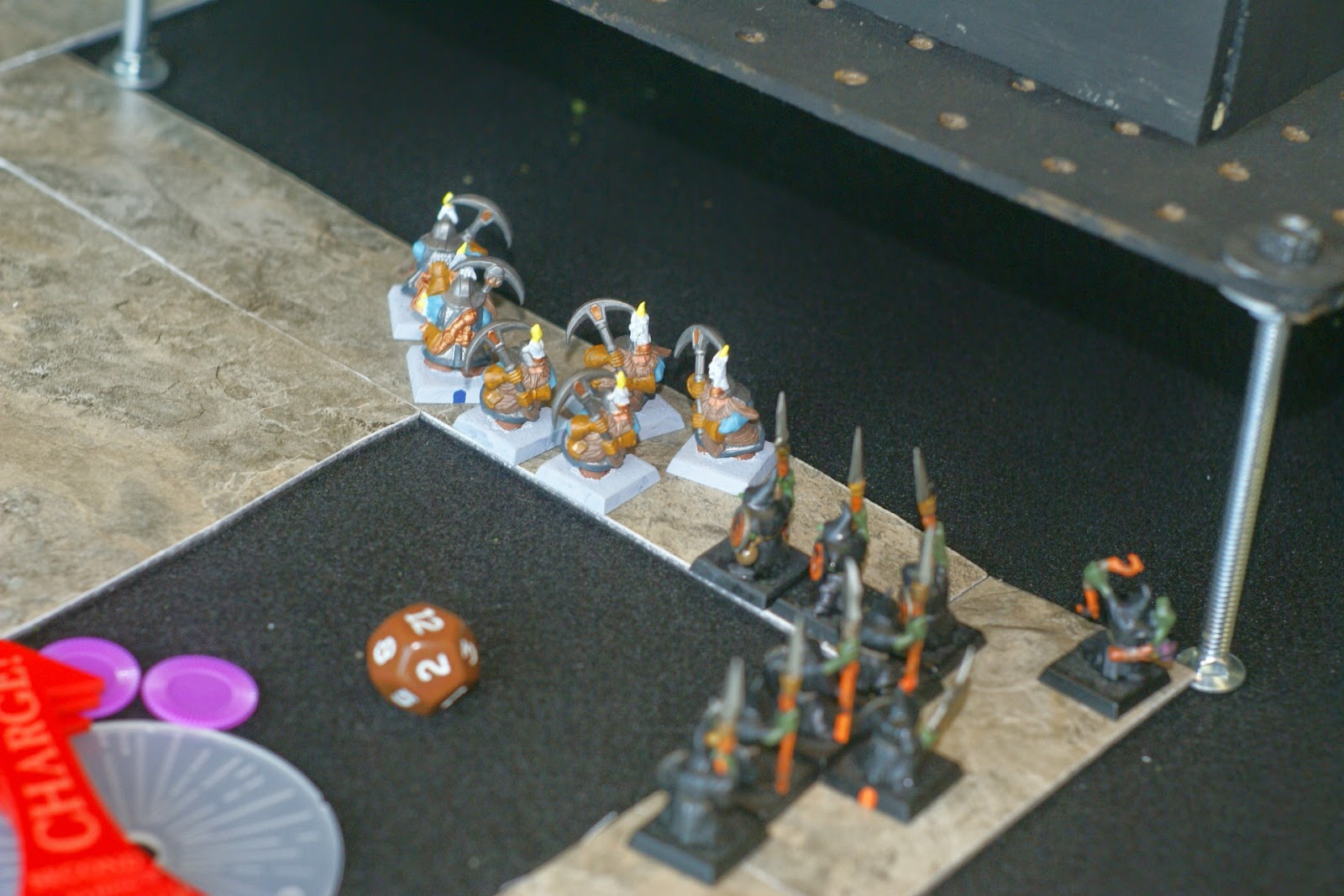 While the Dwarf miners are held at bay! 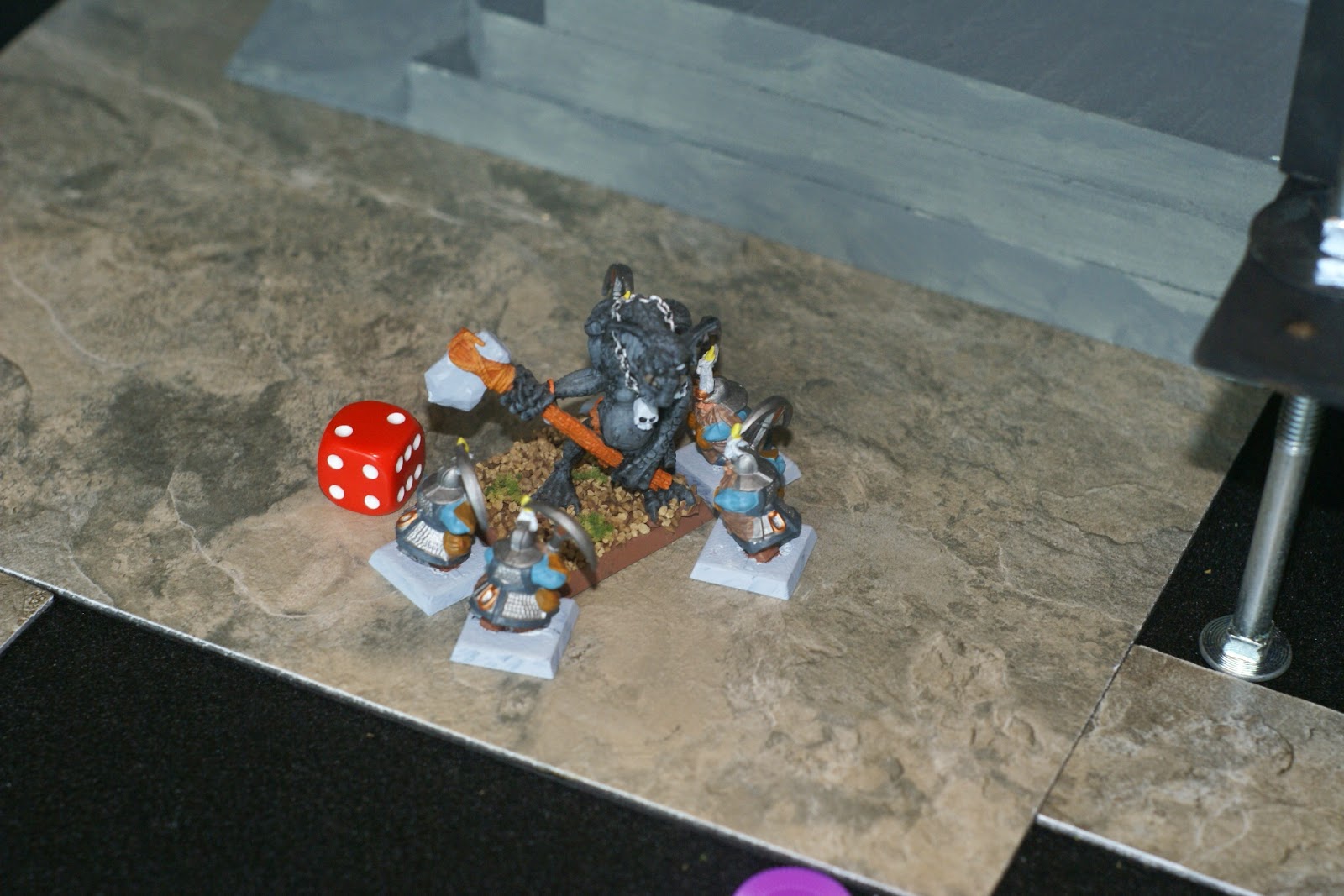 Although trolls could take a lot of punishment they only dealt it out a little at a time! So the game was called at this time, a Goblin win.
Posted by Chuckaroobob at 8:02 AM 2 comments: