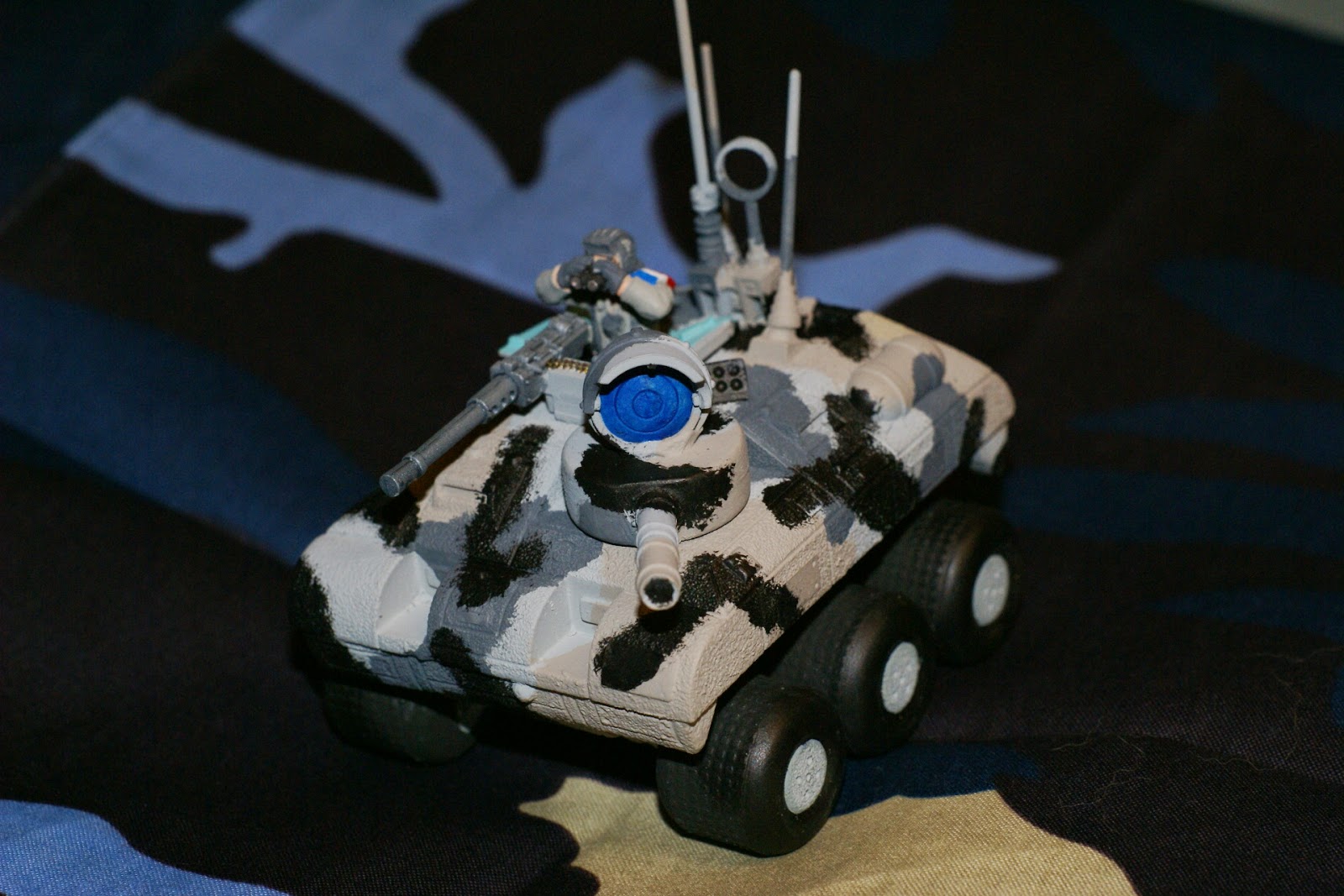 Hi Kids,  Wow! It's been an age since the last time I made any progress in the painting department.  So far this year I've only finished 16 minis.  At this rate I'll be pushing the "you can't die with unpainted lead" belief really hard.  Check back when I'm 1000 years old.  I'll be the one in intensive care resting easy on a pile of lead while all the doctors try to figure out how I managed it.
So just this evening I've put the final touches on the final Kryomek Nexus 25mm vehicle.  It's legal name is a "Sand Carrier,"  a six wheeled APC from Kryomek USA or Scotia/Grendel depending on which side of the pond you happen to be on.  I realized I had an extra vehicle after painting everything I had planned, and figured I'd make this one a little different.  I dug out a Forge World command fig, a few washers, some bits and pieces from 40K sprues, and even some fuel tanks from 15mm JS-3's to make the gun barrel.  With all those antennae it's combat life expectancy would be about 3 minutes, and probably less on a wargame table.  I'll be shocked if they all remain attached during transportation to the first game!  This is also the first time I've ever gone through the trouble of mounting the turret with magnets, usually I just insert a pin so the turret can rotate freely.  It seems to have working pretty well.  So now all the proxy tanks are ready, but I'm still dreaming of painting and  using all my 1:87 RAFM Heavy Gears as power armor infantry, and I have a 25mm Bauhaus Grizzly mega tank hidden in the Basement someplace to proxy the Ogre.  And if I ever find the damn thing there's an Armorcast Mega Cannon to proxy a howitzer.  In Ogre I've never been a big fan of howitzers, so one should be enough.  If the Basement ever gives it up.

AND,  I started working on 2 more 25mm Rough Riders on horses, a JTFM Pz 2, and an ancient Robotech Zentraedi scout pod I've been ignoring for 20+ years.  I'd like to thank my bud Bryan for telling me he was going to kick my ass next week if I didn't get something painted!  Motivation at last!

And no, I can't make a blog entry without mentioning the world famous Triple Grey and Black camo of the 13e Demi-Brigade of the Foreign Legion.  Its a compulsion. Sue me.
Posted by Chuckaroobob at 8:00 AM No comments:

Almost Steampunk? or the Goodyear blimp in Concord NC

It has been a slow gaming month but I hope to get some more content up soon. In the mean time I went with SWMBO to Concord Mills mall in Concord NC to get materials for a secret project for the young master's birthday party. We gambled going down because the History 300 nascar race was going on at Charlotte Motor speedway less than a mile away. If we timed it wrong and the race let out before we left, we could look forward to an hour or more in traffic just to get out of Concord. 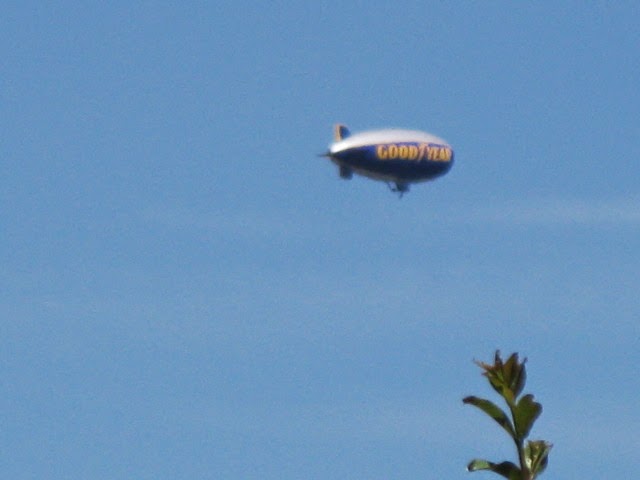 I so happened to have my camera with me and managed one good picture of the Good Year blimp flying over the speedway about a mile away. I didn't make the race but I still get excited every time I see a blimp fly over.