Here he is The Chuckster living it up at Historicon. This picture was posted up on the Victorias Boys in Red blog and I reposted it here for your viewing pleasure.

A couple weeks ago I played in a campaign megabattle at Greg Downing's Battle Bunker. Originally the plan was to play a round robin series of games were everybody played each other and have a cookout. We ended up with an odd number of players so the plan changed to a megabattle and a cookout. The Sides ended up Greg with his Sisters of Battle, John Nellis and his Blood Angels and me with my Adeptus Mechanicus Imperial Guard verses Jim Barr and his Wordbearers and Shaun Parrish with his Chaos Marines. We set up a T-shaped table and placed 6 objectives. One in each deployment zone and 4 in No-mans land. 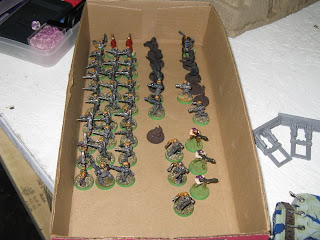 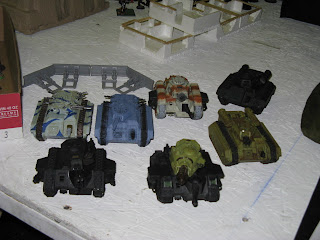 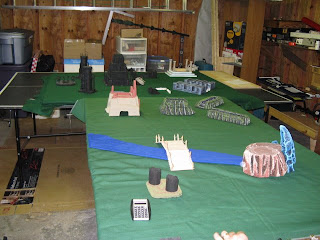 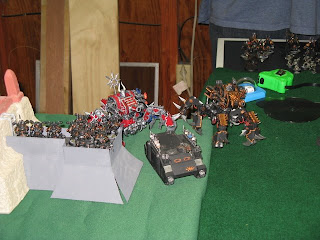 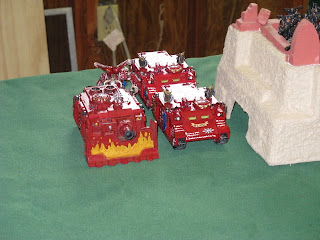 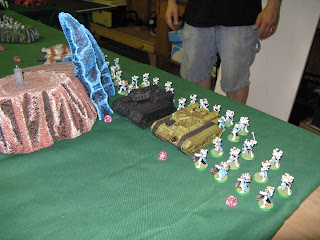 Sisters and Banewolves hold the flank 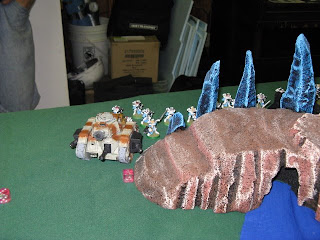 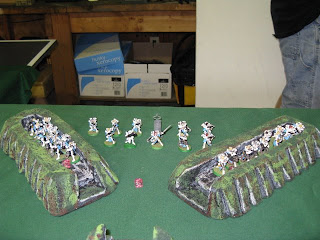 Sisters defend the objective in our deployment zone. 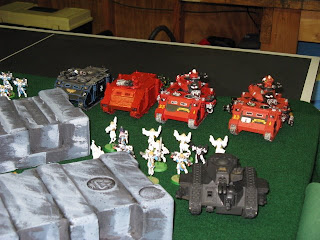 Blood Angels in the backfield 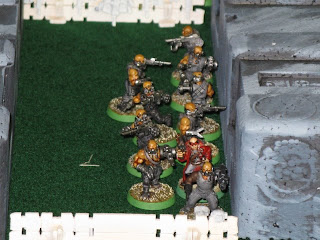 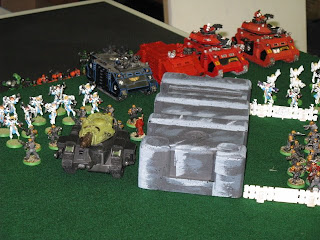 The Executioner and more sisters ready to move out. 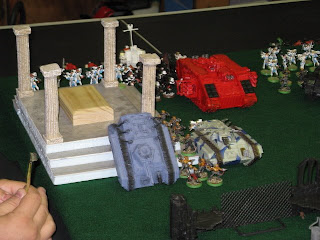 Col. Elvo and the platoon commander riding in chimeras and the vet squad using them for cover. 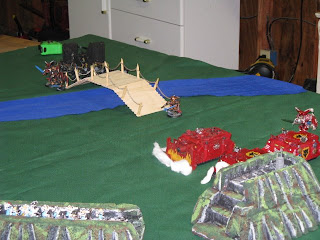 Chaos flank as the Word Bearers move out. 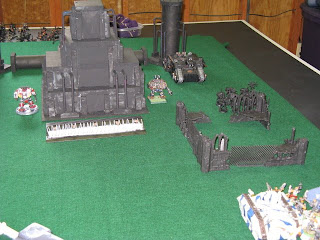 The Raptor squad move toward the objective in the ruins. 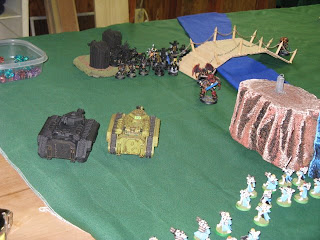 The Banewolves move up trying to get a shot on the Chaos Marines and Thousand Sons before they can shoot down the Sisters. 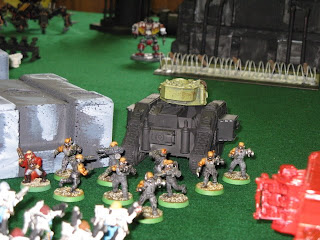 Executioner moves up and takes some shots at the word bearer Dreadnought. 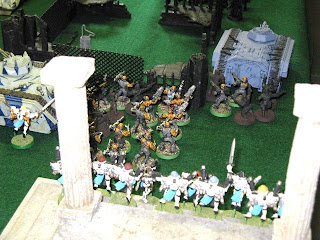 Col. Elvo and the vets move up and make a run for the objective in the ruins. Followed by the Seraphim Squad and the Cannoness. 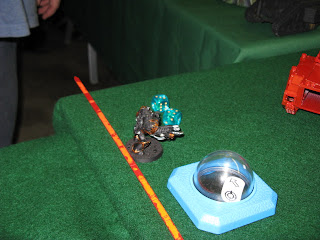 An Obliterator with a bad scatter near the back board edge. 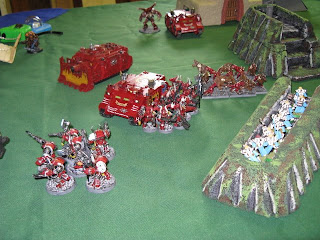 Wordbearer terminators arrive along with a bunch of summoned Daemons. 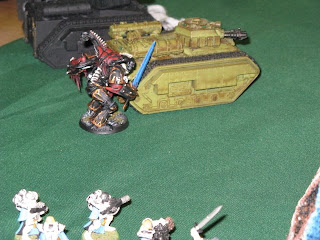 Daemon Prince takes out a Banewolf. 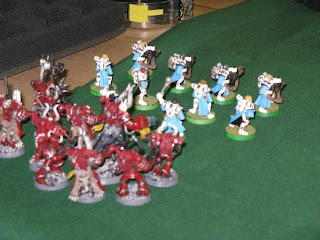 Sisters outflanked by the Wordbearers. 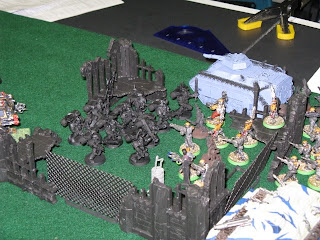 Col. Elvo, his ringer squad and the Vets verses the Raptors. 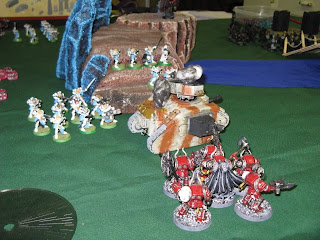 Terminators smoke the Demolisher while the sisters make a run for the objective on top of the hill. 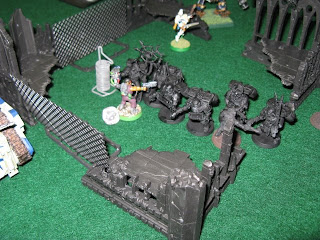 The vets run and leave Col. Elvo and his Medic to finish off the Raptors. 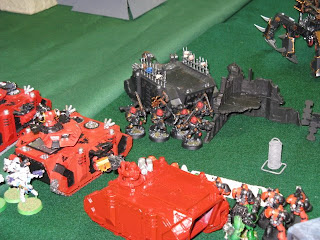 The Khorne berserkers disembark into a crossfire. 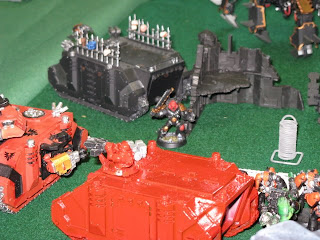 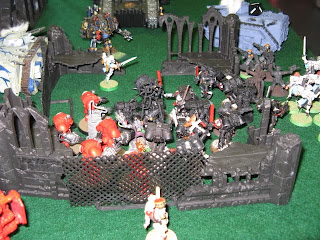 Col. Elvo finishes off the Raptors! Well, he might have had a little help from the Blood Angel Terminators and some Death Company lead by Chaplain LeMartes. 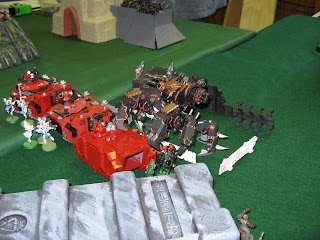 Defiler on the rampage over an objective. 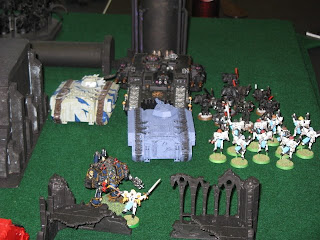 Cannoness duels with a Chaos Dreadnought while the survivng guard and Serephim make a run for the chaos objective.
Of course, the most important action of the end game and I didn't take a picture of it. It was when Mort Brandysnap appeared tossed his demo charge on some noise marines and contested the Chaos deployment zone Objective. This turned the game from a draw to an Imperial Win. Shaun, I believe, was scarred by this maneuver as he has commented on it everytime I have seen him since. I had a good time and look forward to more games at the Downing Battle Barn.
Posted by ColKillgore at 5:44 PM No comments: