One finished and some WIPs

My first finished figure for 2010 is this chronoscope cowgirl/ gunfighter figure that had been on the painting table for too long. 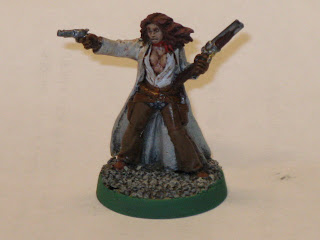 She was part of the great half finished horde of figures, but no more. She will probably take the field in the next instalment of the Prospector Bob saga. 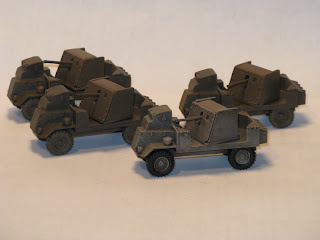 I also played in an Africa Flames of War game at the Basement of Heaped Miniatures. It was six players with 2000 points each. I fielded a British Heavy Armoured Squadron and finally broke out these Deacons that have been in a bag for four or more years. I only had the wheels glued on for the game but fielded them in all their unpainted and partially assembled glory. They had a fair showing and, of course, were destroyed. I had fun even thought I was eliminated from the game before it finished. It motivated me to get the Deacons assembled and put some paint to them. I think I will finish them the next chance I get to set down and do some painting. 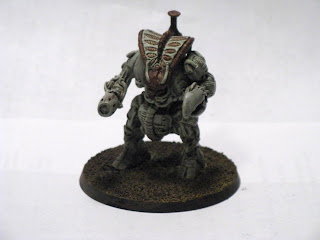 A classic Rogue Trader Chaos Dreadnought I am painting up in Death Guard Colors. This is an all lead model, from back in the day, when you could put your model in a sock and use it to beat your opponent into submission if you felt the urge. 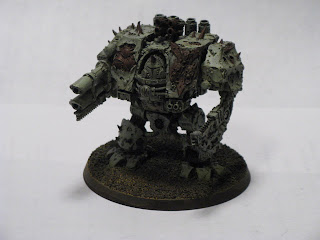 This is a Forgeworld Nurgle Dreadnought I am also painting up in Death Guard colors. All resin but the arms are magnetized so I can swap out weapon options if I ever get more arm options.

Posted by ColKillgore at 8:44 PM 3 comments:

Surprise Game of Flames of War

Hi Kids, We had a surprise game of FoW in the BoHM, one of the lads was feeling masochistic and decided he wanted to fight three other guys. He took 4500pts of late war Huns while the other three took 1500pts each; two Russian and one American. Here are two shots of the final stages of the game, the US and USSR are finally battering their way into the city. They've taken one objective and are on the way to the Ultimate Objective in the railroad yard. It was a pretty good game but by the time it was over (2am) I was definitely ready for a break. I think the Allies took something like 50-70% casualties, the Huns about the same, although the Allies still had some tanks and infantry left, the Huns were down to Infantry, and a few halftracks and guns.
Conclusion: Start games earlier. I mean it this time.
Posted by Chuckaroobob at 11:18 PM No comments:

Well, I set up my resin casting kit and started making some 15mm Opel blitz trucks and some more nurgle wheels for the contagion project when disaster struck. The nurgle wheel mold cracked after only casting up two more wheels of the planned 18 needed for three contagions.
All is not all lost, I still have the master and after a few touch ups I made another mold that is curing as I type. I have made this one a bit thicker on the bottom to avoid cracking issues this time around. I also have a mold for 15mm German half tracks curing. Once they cure I will get out a few test casts.
I need a bunch of half tracks for my planned German Flames of War army and if the mold is good I can trade some around to the rest of the lads.
Posted by ColKillgore at 8:30 PM 2 comments:

2009 was a good year of gaming for me. I didn't get near as much painting done as previous years but I did finish several projects.

On the gaming side I played in the January and November mega Apocalypse games put on by Matt P and the Apoc-Eclipse gaming group. I played in a 40k league using my Adeptus Mechanicus Imperial Guard army and did reasonably well. I also joined in a Mordheim league fielding a Tilean warband. It was a real nostalgic treat to breakout the Mordheim rules and figures for some games. Along with Chuckaroobob, we played a series of .45 adventure Pulp games adding to the Prospector Bob story. I played a bunch of Flames of war and a smattering of other games. One great year for gaming.

The local gaming scene had several changes with two store closings, The Castle in Greensboro and Underground games in Charlotte. On the good side there has been a change of management at the Hobbytown in Greensboro and are more gamer friendly including hosting gaming again. I have also been to Parker,Banner,Kent and Wayne in Cornelius gaming several times. the best thing is that the GameOn Gw club has arranged for a warehouse gaming space for general use. they usually have Bi-monthly gaming weekends and had another games day this year.

I finished several projects. I finished painting my three 28mm scale Plaguetowers to a good table standard and fielded them in the Apoc-Eclipse gaming clubs January Apocalypse game. I finished my Necromunda Delague ganger heavy weapon platoon in time for the new imperial guard codex release to drop the option to field them as a unit. Nevertheless, there is always room for eleven lascannons in an imperial guard army. One project I really enjoyed was scratch building a 28mm scale machine gun to add to my Italian semovente self-propelled gun. I also finished the Reviresco Minos tramp freighter for Chuckaroobob. I was beginning to doubt I would finish it but with the help of the wife and her scrapbooking skills it was completed. One disappointment was returning Steve Jones' Highlanders without finishing their kilts. I painted them to a good table top standard but couldn't get the Black watch kilts to look right.

For Current projects, I am working on the Adeptus Mechanicus Imperial Guard, the Deathguard/Nurgle Daemons and 28mm WWII Italian Paratroopers. On the back burner are some Cygnar for Warmachine and a stack of pulp figures. I have yet to finish Glen W's Tyranids but with the impending codex release, I may end up rebuilding some of the models anyway. I finished everything for Tuna except for a few odds and ends figures but when he picked up the last batch of figures he said he would have more for me later on.

For Future Projects I may have to break out my Tyranids after I get a good look at the new codex. I am planning to build some 40k scale Nurgle Contagions for Apocalypse games. I have been planning the build and I want to build at least three and maybe more. I have also been following several forum threads about scratch building Blight Drones and I might try my hand at a few of them too.

The painting total for the year was Ninety-Nine models. A sad drop from the over three hundred of the last couple years. The Numbers break down to thirty seven models painted for me and sixty two models for other people.
Posted by ColKillgore at 12:44 PM 3 comments:

First a Happy New Years Day to everyone.

The first post of 20010 is the last painted model of 2009. I finished it before Christmas but didn't take pictures till a couple days ago. I acquired the model in a trade a couple years ago and it has been on my painting desk base coated for probably a year or more. When I received the model it was missing it main gun and the left crewman was missing his laspistol. I broke the model apart stripped the paint, cleaned up the mold lines and reassembled it. I gave the crewman a replacement laspistol and added a multimelta main gun with plans to use it as a proxy space marine land speeder with my Adeptus Mechanicus Imperial Guard army. With the release of the newest guard codex and the option to give Sentinels plasma cannons, I replaced the Multimelta with an old ork heavy plasma gun. Now, along with my original guard land speeder, I can field the two speeders as plasma cannon armed sentinels in regular games of 40K. 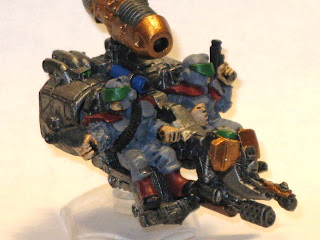 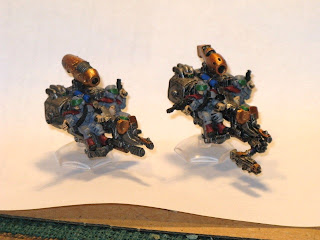 A squadron picture of the new and the old Land Speeders. 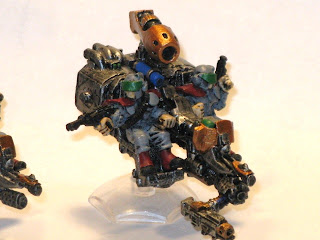 A close shot of the old style Land speeder
Posted by ColKillgore at 9:49 AM 4 comments: