There has been some talk of Disposable Heroes thrown around lately and It has motivated me to get a Chinese force painted up for the next game. Using The Red Sun, Red Death supplement I figured up a 500 point force consisting of a command section, three rifle squads and a 75mm field gun.
I still had a bunch of Chinese models left in the box so I set up all the extras to see how large a force I could field. So after a little bit of quick organizing, I can field a full Chinese infantry platoon with four fifteen man infantry squads and a full Big Sword platoon with three fifteen man squads of broom handle pistol armed assault troops. 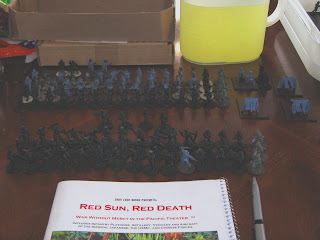 For support elements I have one maxim machine gun and three field guns. I totaled up the points and this gives me about 1300 points of Chinese troops for Disposable Heroes games. I am using some WWI German light machine gunners as proxies for Chinese gunners but I plan to get some Finnish lmg troopers and do a head swap to make them blend a little better with the Chinese.
I am contemplating a few other additions but I think they can wait for later.
Posted by ColKillgore at 10:49 AM 2 comments:

It seems I have been bitten by the Beastman bug again. After some dealing with Kenshinzo7 I came away with a bounty of beastman models. I picked up minotaurs, khorngors, ungors, bestigors, a centigor and Kzarnak model. The one I like the most from them all is the mordheim minotaur. I had only seen the model online before never in person.
My plans are to model the centigor with a club and use him as warhoof the new centigor special character. I will field the khorngors as regular bestigors, which will bring my total to around seventy. My problem now is there are too many units in the special section I want to field. I will have to pick and choose the units. I am working on some lists and will post about them later. 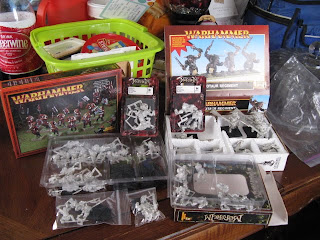 The other half of the deal was a bag full of skaven clan rats on the sprue, an old school doom wheel and a few other skaven models. These models take my skaven army from an over sized warband to a troop heavy army. I don't have the new skaven book so I am not sure of the points I could field. So as it stands my skaven consists of 130 or so clan rats, 20 slaves, 6 rat swarms, some beastmasters with giant rats and one rat ogre, one jezzail team, one doom wheel, a pile of the mordheim gutter runners and a handful of characters. 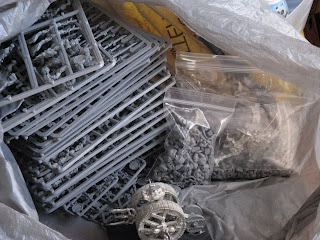 I would blame Mordheim for me building a basic skaven army around the skaven from the box but it would be false. My first ten skaven were from the Fantasy regiment box I bought back in the serpent years of the late eighties. For those that don't remember it was a box of sixty figures for I think $20US. It had ten models each of skaven, wood elves, dark elves, orc, goblins, and dwarfs and it ranks up with the three rhino box for $20 and the two land raiders for $20. Like everybody else now, I wish I would have bought twenty boxes of all of them but c'est la vie.
The funny thing is I won a bunch of skaven stuff in an auction down at the now closed GW store in Concord and have sold or traded most of it off. I guess I need to get the new skaven book so I came keep my eye out for what I need to add to the army.
Posted by ColKillgore at 12:25 PM 7 comments:

I finished up several models since the last post. 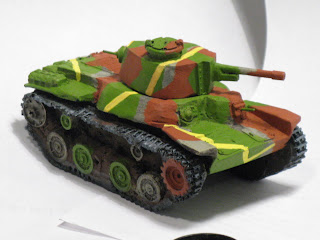 First is a 28mm scale Ha Go light Japanese tank from WWII. It is from All Fronts Armor Depot and was a gift from Chuckaroobob. It is a resin model and has a lot of flaws but is a fine gaming miniature. I had to repair the main gun, added wire to make the hull and rear turret machine guns, filled many voids and filed off a bunch of mold lines. I started with a black prime then a base coat of burnt umber. Then a dry brush of Vallejo Iraqi Sand. The green is a Vallejo olive green and the brown is a Vallejo red leather. The yellow disruption stripe was based with gw bronzed flesh and finished with a reaper lemon yellow. You ask "Whats with the yellow stripe?" That was the way it was in the Osprey book so I guess it was the way the Japanese did it back in the day. Now I have to paint up a bunch of my Japanese Infantry to back it up. 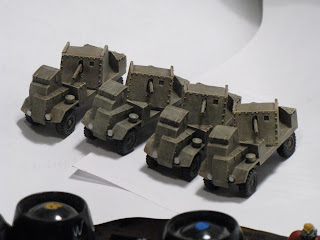 I put the finishing touches on the Deacons a while back. I started with a black prime and a Burnt Umber base coat. Next was a couple heavy dry brushes of gw Kommando Khaki followed by a highlight of Vallejo Iraqi Sand. Vallejo Ivory on the headlight, black on the tires and gw Bronzed flesh on the crews flesh. Now they are ready to be fielded in the next Afrika flames of War game. 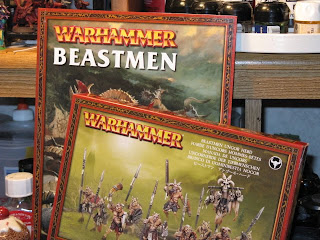 I did it again and bought the new Beastman army book for Warhammer Fantasy Battle. It looks like I will be updating my beastman army once again. I also picked up a box of the new ungors and plan to build them with bows. I have a bunch of chaos thug archers from back in third edition Warhammer and the battlemaster game. They are going to return to the table again as ungor archer proxies. My biggest gripe about the new book is that Ungors have been moved back to 20mm bases. I have already rebased all my older ungors to match the last editions on 25mm bases and as much as I don't like it I am leaning towards rebaseing all forty five of my current ungors back to 20mm bases. There is alot of snazzy stuff in the new book but I have just started to read it.
Posted by ColKillgore at 5:47 PM 3 comments: