We had some good priming weather so I broke out the spray and my back log of model to be primed. After a frenzy of priming, I finished 19 chaos terminators, 30 sets of chaos terminator arms, 3 praetorian sentinels, a nurgle lord conversion, 2 plaguemarine special weapons, 3 plaguemarine icon bearers, 2 chaos space marine standard bearers, 4 rogue trader halfling sniper, 1 roguetrader stuntie, 2 chaos objective markers I made, and an armorcast baneblade hull. I had more terminator to prime but I ran out of paint and when I found another can it had started raining.
I also finished the trade and picked up the armorcast eldar tempest from Jerry last Saturday. While I was at Underground games, I also picked up the Legends of The Old West supplement Frontier, Blood on the Plains, a couple of 15mm 21/2 ton trucks for my Soviet Flames of war army and some more plaguemarines from tuna. I only need about a dozen more trucks for my transportation company.
Last night I started working on repairing a bunch of the plague marines I traded for from Scott Tolbert. Whomever had assembled them had used superglue to fill gaps and had left some bad cuts were they had cut off pieces for the conversions. I redid some of the conversions, using greenstuff to fix resculpt several of the models torsos, re attach arms and do several weapon swaps. I need to start remembering to do Before and After pictures to post up, maybe next time.
Posted by ColKillgore at 12:21 PM No comments: 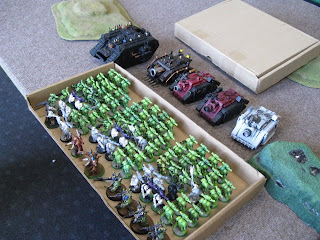 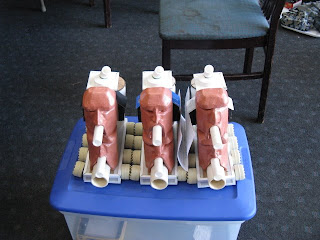 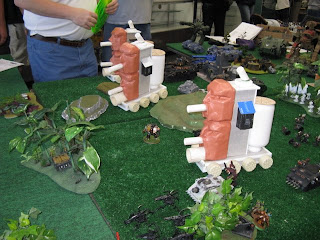 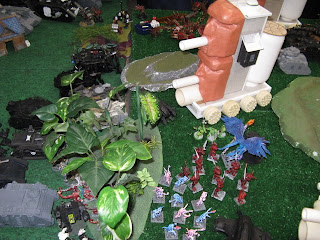 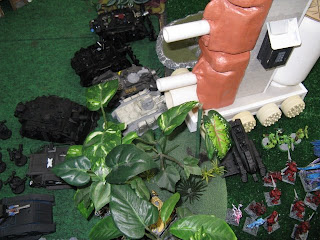 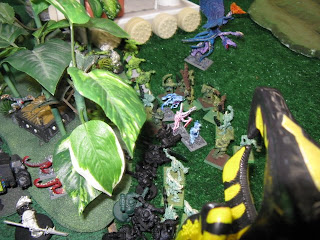 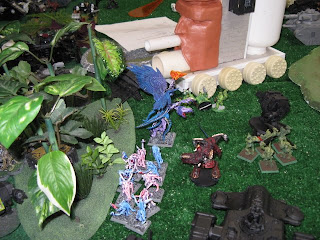 I went down to Underground games for another Apocalypse game put on By Tuna. This was a break from his standard format and was a "run what you brung". The was no limit on points or factions. the only caveat was that you only had an hour to finish your turn. If you brought more than you could run then you were short when the turn time limit ran out. We also didn't stick to a certain phase. When you finished moving, you started shooting, finished shooting start assaults. This caused some confusion and maybe a little abuse by some players. It did speed up the game and still left some people upset when time ran out and they had assaults to finish. It ended up being around 103000 points with 30 super heavies of which 9 were titans.
I took my three plague towers, a four vindicator line breaker squadron, 86 plagumarines in 9 squads, 3 14 man lesser daemons squads, Typhus, 2 chaos lords, a chaos lord in terminator armor, a land raider, and four terminators to ride with the lord in terminator armor. It totaled a little over 7000 points. The other team went first and 3 of the vindicators and the land raider were destroyed. Plaguetower 1 had a precision strike played on it and the entire side of the board lit it up. It came through the firestorm with no guns left, both drives damaged and down 3 structure points. Surprisingly, it survived the game with only one structure point left, but it did not move from the spot I placed it on the table. The terminators were in the land raider but survived its destruction. Turn one I moved up two of the plague towers and headed the terminators into cover close to an objective. I did a bit of shooting with the towers but didn't really do anything spectacular. Turn 2 the towers took a lot more pain with 2 ending up immobilized. Turn 2, I dismounted a 19 man plagumarine squad from the center plague tower to head for the center objective and brought in 2 lesser daemon squads. I charged the daemons into a khorne greater daemon model only to find out the guy was using the forge world greater daemon rules and the lesser daemons were unable to wound it. I moved the chaos lord and terminators up, assaulted an objective and despoiled it removing it from play. This made it a win or lose game. We started with 6 objectives, losing one meant no ties.Turn 3, the plaguemarine squad took a plasma blaster 10 inch template and killed all but 3. Both lesser daemons squads were killed but a player had dropped on a grey knight force so all daemons received sustained assault, so they would be coming back on my turn 3. The remainder of the terminator were lit up and a couple killed, then they were charged by a terminator squad and finished off. They did their job. My Turn 3, I used the center plaguetower to ram a vindicator.I didn't do any damage but it put me within 6 inches of the center objective. I used the plasma guns and plasma pistols of the mounted squads in the plaguetowers to thin down the resistance near the objective. I brought in all three lesser daemon squads near the center objective and charged them in. I repaired a plague mortar on one of the towers and repaired a drive on plague tower 1. Turn 4, plaguetower 1 took even more fire and damaged the drive I repaired and dropped it down to 1 structure point. The center plague tower was assaulted by a terminator squad losing a couple structure and having it driver stunned but in the end it had no guns but it was still mobile. the heirodule assaulted a lesser daemon squad and once again I found out they were unable to wound its 8 toughness.My turn 4, endgame. I deployed the chaos lord and 2 plague marine squads from the center plague tower in cover, close to the objective. I assaulted an enemy plagumarine squad on the front of the objective and fired a plague mortar on an enemy plaguemarine squad behind the objective, killing 7 out of 10. I then fired up the survivors with plasma guns and another player dropped a bane blade template on them. Then the game was over. We started tallying up points and we carried the center objective because of 700 point of plaguetower parked next to it.
I had a real good time and being on the winning team made it better.
Posted by ColKillgore at 10:30 AM No comments:

A Model Count and a New Plan

I went Tuesday last week and and traded 3 of the new 7man plaguemarine squad boxes for 24 older style plaguemarines and one chaos terminator. The terminator puts my annihilation force at 51 models so I can use my paired lightning claw chaos lord conversion as a lord and not as a champion in one of the squads. The better find was a couple of the old chaos renegade nurgle marines included in the deal. They don't have the rogue trader style chaos backpacks but i think I have a couple somewhere to add to them. I am debating on whether to add them to my chaos renegades or to add them to the death guard as champions. I also picked up several of the one pose metal plaguemarines that will give a little variety to some of the squads. There were a few of the plastic one pose models(mostly converted to have bolt pistol and close combat weapon) and the remainder were the 2ND edition metal body with plastic arms. I will probably swap the bolt pistol for bolters on the plastic ones and I am contemplating making the majority of the metal bodied one plasma gunners. This will give me over 20+ plasma guns. I was doing some plague tower math and figures if I went with 5 man squads I could put 6 squads with 2 plasma guns each in each plague tower. the plague tower has 10 fire points so 20 rapid fire plasma shot on anything that gets within 12 inches and If the tower stays still it will have 10 plasma shots out to 24 inches. Combined with the towers own weapons I believe that it should be able to sweep just about anything off of an objective and keep it that way. I could optimize the numbers with 30 plasma gunners and I think I have enough bits to do it, but other than it just being wrong , I would only field them all a couple times a year in big apocalypse games.
I have to set down and reorganize my plaguemarine figures. I already had enough models for a battle company before I picked up more models at the GameonGW gameday. A different load for the Plague towers is a twenty man squad and two five man squads. Use the towers as big transports to get the big squads to the objectives and the smaller squads stay on board as point defence. I think this is a little bit more balanced load (with a lot less gun swaps needed) and still a powerful force. It also doesn't smack of a ringer combat load. I admit that 20 rapid fire plasma gun shots lighting up a high point marine squad closing to assault the plague tower leaves me kind of warm inside but the guy on the receiving end will probably not get much enjoyment from the experience.
Either way it is back to the modeling table for a model count and a new plan.
Posted by ColKillgore at 7:14 AM No comments: