Hi Kids,  Well, after not painting a damn thing for the past six months or so, I finally got off my butt and finished a few things!  Some time last year I dug up this Zentraedi Scout Pod, and figured 20 years of aging is enough, time to get some paint on that bad boy!  And it looks like my timing is just about right, rumor has it that the first wave of the new Robotech game are shipping to the kickstarter crowd.  For the next week or two this one pod army is probably the biggest army around here.  I don't remember who manufactured these things 20+ years ago, maybe Dark Horse? 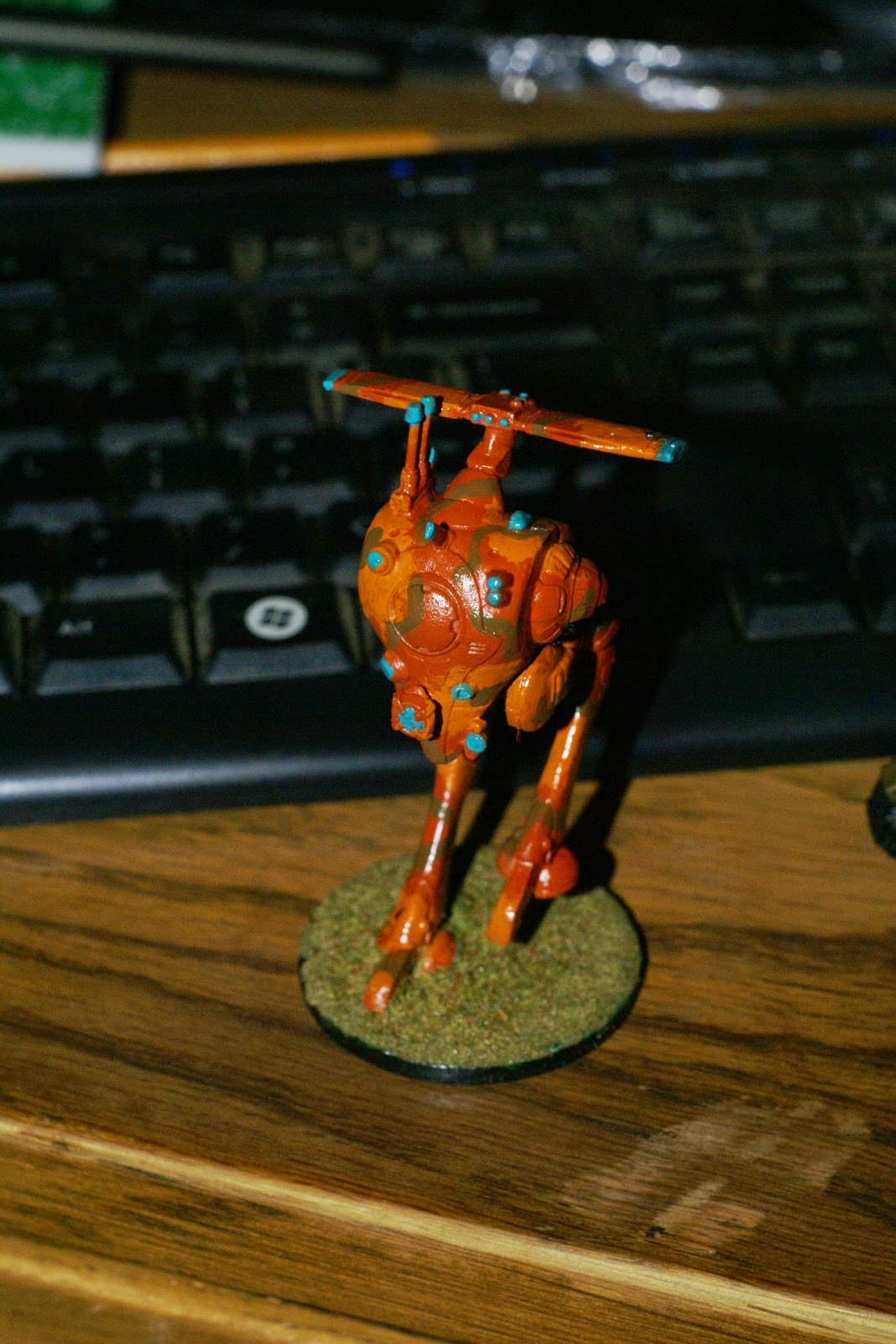 For no reason in particular I decided against the standard white and light blue/gray scheme and went with my Tau Mars camo scheme.  My Southern Heavy Gear sport this same look.  I mounted it on a heavy washer since I was afraid it would be top heavy without it.  It's about 3 & 1/3 inches tall, all lead. Once the kickstarter stuff is available I'll probably buy a fistful more Zentraedi. 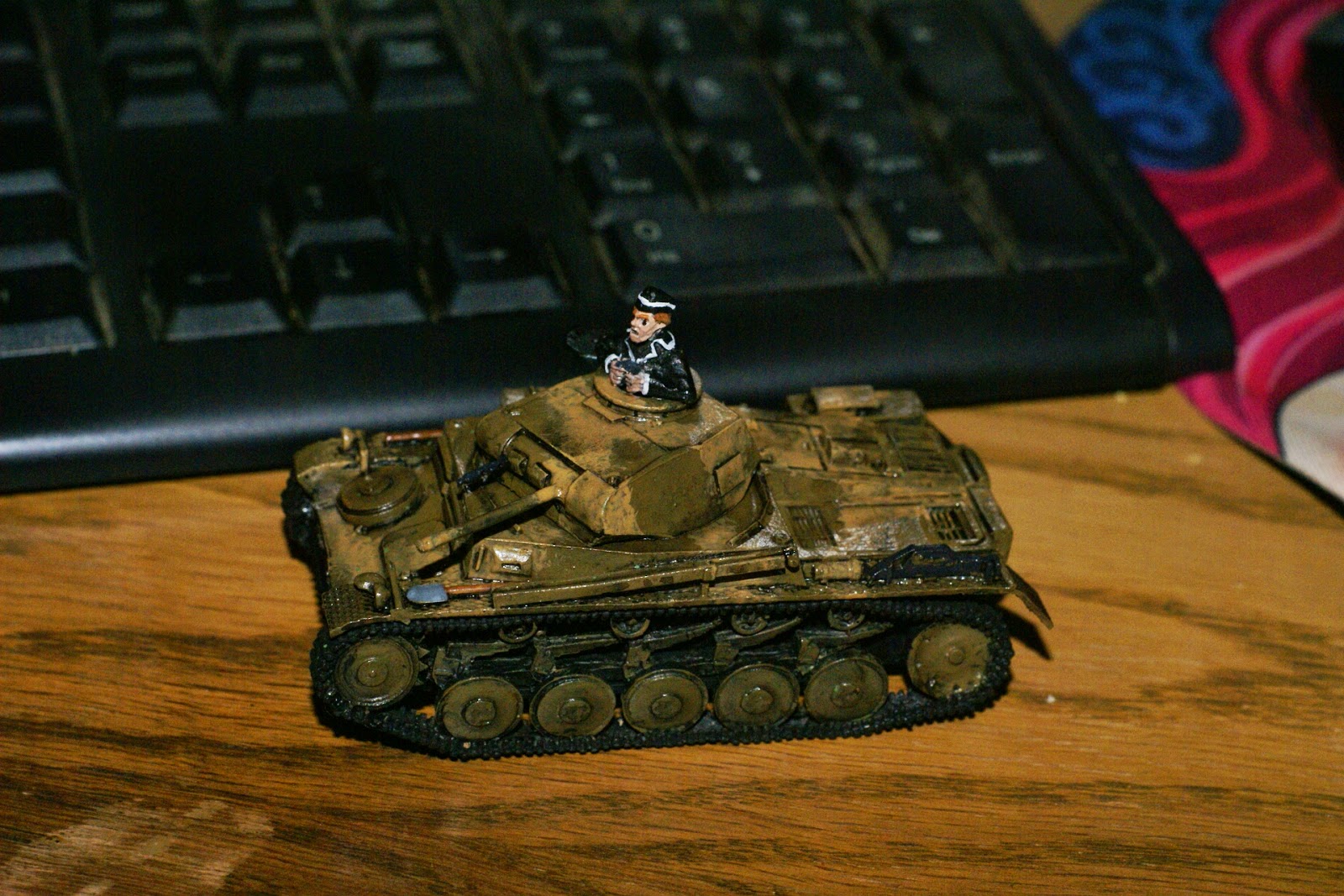 Also finished was this 1/56 Pz 2, although its only about 14 months old.  Picked it up from Brigade Games at Historicon 2013, although I'm not 100% sure I believe its a JTFM. I decided not to paint my Hun armor grey, so found some color pictures and picked out a nifty scheme.   My Army Stain is going bad so I went back to the basics and used Magic Sauce for the wash.  My early war Huns are coming along rather slowly, but you could say that about all my projects.

I also managed to flock the two 25mm Tiger Miniatures Spanish-American War Rough Riders I painted back in Feb or so.  You've all seen pictures of similar stuff here before, so no pic required.  That brings my total for painting to about 18 for the year.  Yikes!  Usually I'm up to around 100-500  by now!  Its been a crappy year for painting around here.  Started working on 14 Khemru slingers for Wargods of Aeygptus too.   Lets see how long it takes to get them finished. 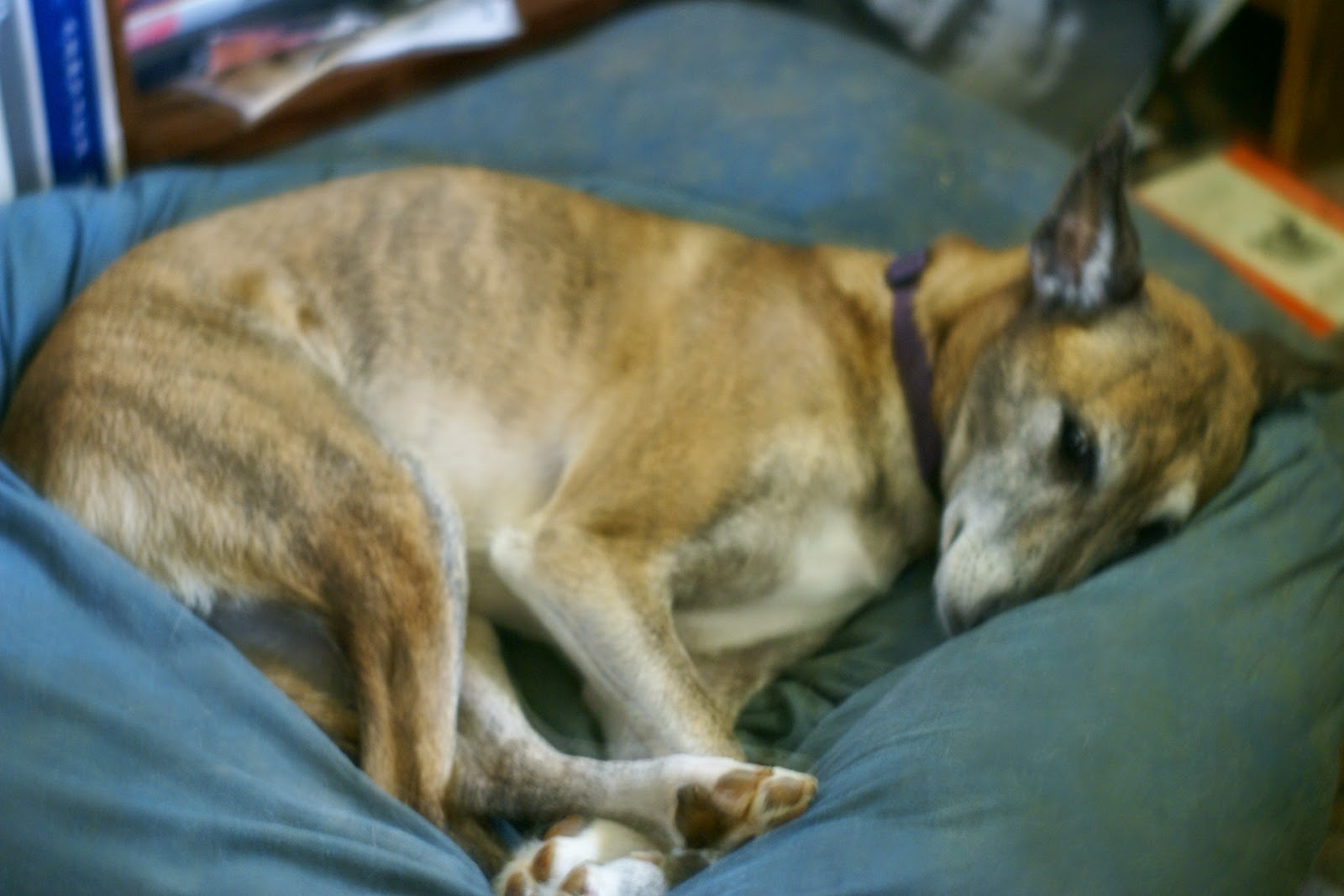 My dog Molly relaxing next to one of the many bookcases in the homestead.  I took this picture to see if my camera was working, and it would have been a shame to delete it!  The shutter was about 1 full second, it was kinda dark!  I'm surprised it worked at all.  But then again that camera is a lot smarter than me.
Posted by Chuckaroobob at 11:32 PM 1 comment:

After the Fett/Solo South Dakota Grudge match we set up for another game. This time Darth Vader leading the Imperials against Wedge Antilies leading the Rebels. The Lad was running Wedge and Chuckaroo had the Y-wing while I ran Darth Vader in the Tie Advanced and Sontir Fel In the Tie Interceptor. 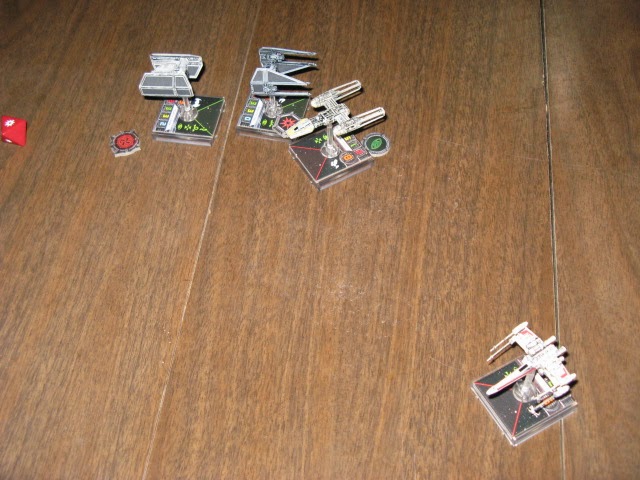 Early in the game and Sontir is already damaged and Darth Vader has been hit with an Ion cannon. 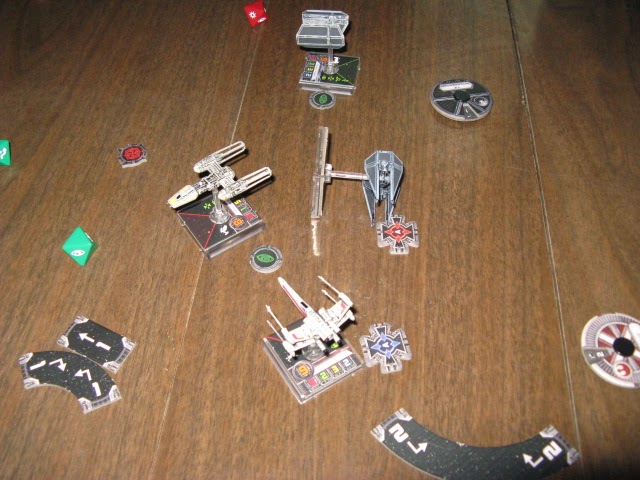 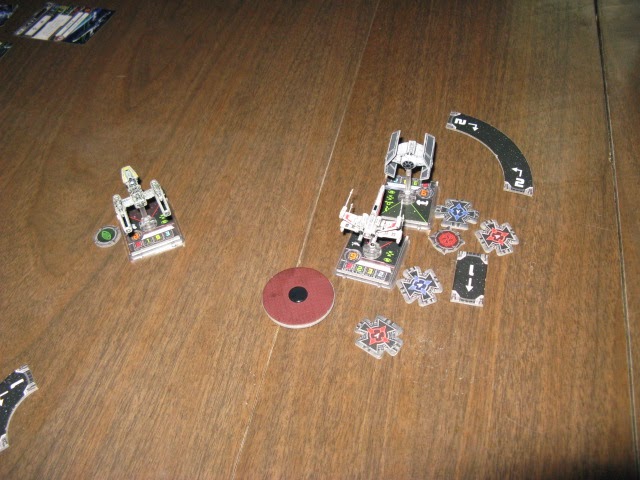 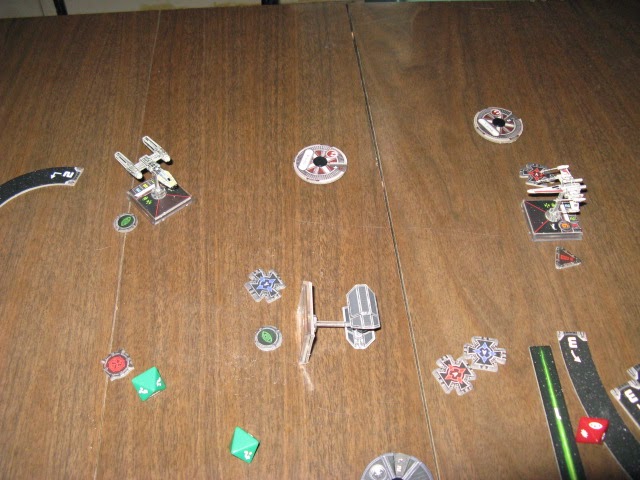 I really like playing Vader but it is more a style choice than anything else. Until he can force choke another pilot I think I might have to come up with another favorite ship to play.

Posted by ColKillgore at 9:30 AM 2 comments:

A return to the Basement of Heaped Miniatures and a X wing rematch. I all started back last Thanksgiving an X wing at Casa Del Killgore. Chuckaroobob with the Millennium Falcon and the lad with Luke skywalker teamed up. The Lad did alot of flying around repairing his shields while Chuckaroo and the Falcon took the brunt of the damage. Since then the Lad has decided that Boba Fett was the solution to the Falcon and the Grudge match was on. The Lad chose to have Boba Fett and a couple Tie Interceptors against Chuckaroo with Han in the Falcon and me with Tycho Celchu in his A wing and Airen Cracken in a Z95 headhunter. 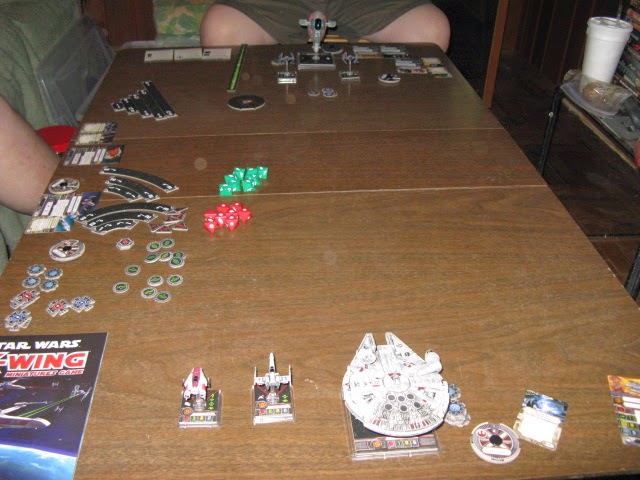 The forces angle their deflector fields and accelerate to attack speeds. 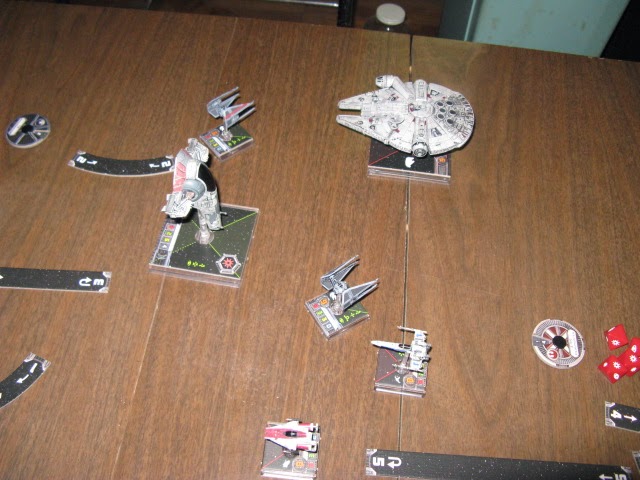 The Imperials go full on after the Millennium Falcon, Ignoring the other Rebel ships. 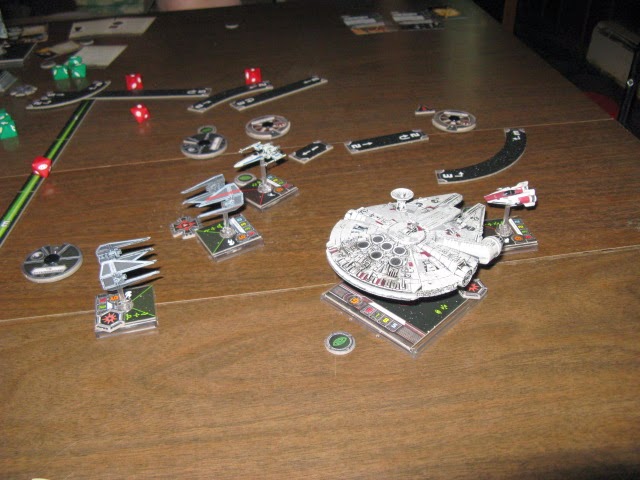 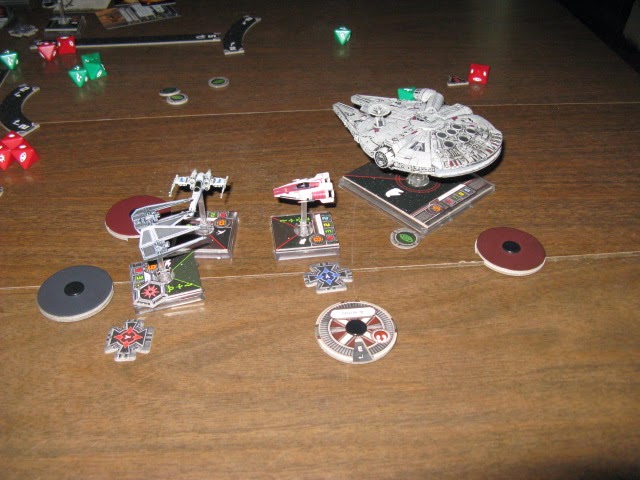 Tycho and Airen knock out one Interceptor. 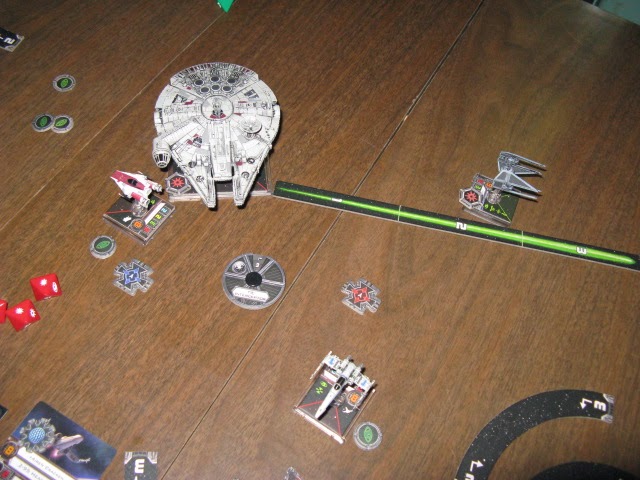 Next turn everybody breaks, 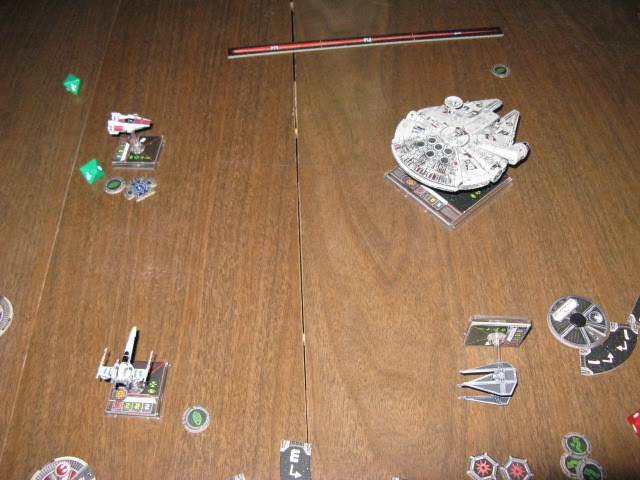 The Interceptor runs but not fast enough, The Falcon shoots straight and puts down the last Interceptor.

The only thing I can say is Han Solo in the Falcon is bad news.


The lad recently acquired the Interceptors and the Z-95 with birthday money and this was the first time for them on the table. I like the Z-95 and look forward to the new Most wanted supplement from the Scum and Villainy Faction.

Hi Kids,  Thought I'd do a special report on the retail aspects of the Big Show.  If there's any one reason to make the trip, its gotta be the dealer hall!  The flea market is a nice extra as well.  There's no elevated platform like at the Host in Lancaster, but I have some randon shots of the area.

Beloved by all, its Daisy of Wargames Factory, doing the "Vanna White" pose with the 25mm Leviathan available for the lowlow price of US$96 (normally $120 IIRC)!  Show special:  buy 5, get one free!  They've got an evil modified one too, for you evil types.  You know who you are.﻿

The long shot down one of the aisles.

One of my favorite places to throw money around; Brigade Games, with the dude from Company C﻿!  Sometimes I think Lon should just use payroll deduction from me!  I've been buying his stuff since it was all Shadowforge Amazons riding Wooly Rhino's, now he's got his own ranges of cool stuff like WW1 Australians, Brits, Sikhs, Turks, vehicles!  The list goes on and on!

I told Lon I'd make him famous.  Has it worked yet?

Meanwhile in the flea market....

Its not all minis.  Apparently there are lots of boardgamers around too.

Some of this stuff is pretty hard to find!

Monty Python would be so proud....

"Just another flawed game for a defunct publisher" as the Chief Bitching Playtester used to say.

WOW!  You don't see these every day, but there were two of them in the flea market this time around!  IIRC this AH game came out in about 1985, priced at an earthshattering $50.00.  (A standard game like Tobruk was about $12.00)  It'll cost you considerably more these days!
Posted by Chuckaroobob at 8:00 AM 2 comments:

Hi Kids,  Here we are again, checking out the next group of shots from the Big Show!  I strongly urge every gamer wannabe to attend one of the big HMGS shows!  Mark your calendars!  All these shots were from Saturday, traditionally the most popular day of the show.

Let's start off the action with a WW1 game, 25mm!  Those look like British tanks to me!  Churchill would be proud!  Its the 100 Anniversary of the Great War these days.  In the immortal words of Col. Harry Potter, "We called it the 'Great War', before we knew enough to number them."﻿

Conan's Pulp Game:  What is best in life?  Even more spectacular terrain!

15mm Modern Africa!  IIRC its Operation Olympic, South Africa trying to clean up the neighborhood!  I bet its the world famous Mark (of "Daddy's Little Men" fame) playing "I Ain't Been Shot Mum" modified to the modern world.

A close up of the SA Casspirs, in the thick of it as usual!
A whole buncha shots from the Flames of War tournament!

A pack of Stuarts!  Hellish numbers of machine guns!

Stuarts in the snow!  Best damn tank of the war!

When you want air support, its gotta be a Polikarpov I-153!  Accept no substitute!

Sci-Fi, "Tomorrow's War!"  I really like the look of the armored bug.

Two shots of the Miniature Building Authority's 20+ foot table of the modern Mideast.  I took two cause I wanted the chopper in focus.  Darn that focal length!

Yeah, your eyes are ok; those are Gnomes out there on the battlefield!!!  Is that poison gas in the background?

WW2 about to get revved up!

The world famous Roy putting on a TSATF game of the Heroro Wars, German Southwest Africa.  His book is now published!  Go buy a copy!

The Wargods of Eygptus crowd settles down for some mayhem!

While the fans of Judea Ben Hurr race around the Great Circus!

When you have your rum, sodomy, and the lash; why not do the Battle of Andros, 1696 with "Victory Under Sail!"  World domination without fuel!

The Gates of Mordor.  Believe me, you really don't want to get through those gates.  Rough town.

And in one of the board rooms, race games!

A close up of one of the racing machines!

When you're through with the Red Planet, keep racing!!!

Call the Orkin man dammit!  Bugs are taking over the place!  Starship Troopers!

Carnage and Glory with the Napster!

X-Wing for the galaxy!

Later that evening, the Wargods of Eygptus are still battling it out!

And the Old West, waiting for the payrolls to come in on the stagecoach.  Seems quiet.  Too quiet.

Well that's about it for this con report.  So will we see you there next year?
Posted by Chuckaroobob at 7:30 AM 2 comments: