For the last model for the Zomtober painting challenge I went with a figure that would involve a bit more painting than the first three ghouls. The model is the Ghoul Witch on cauldron from the Reaper Dark Heaven Legends line. I picked it up a while back with a bunch of other Reaper models, when a shop discounted its already discounted clearance items. It has a lot of character and has many gaming uses. I added a 20mm square base so that I could add it to my Warhammer Vampire count army as either a Necromancer or Strigoi vampire. I can still see using her in Call of Cthulhu games down in the Bayou or as a Leader in Zombie/Horror games. 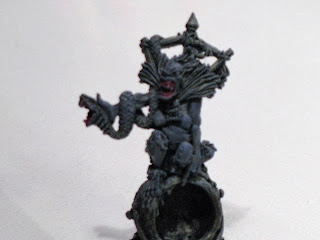 This model took me awhile longer to paint. I didn't have a guide to use like I did for the ghouls. I started out with a shadow grey base coat like the ghouls but decided that I needed to do some thing different to make her stand out. 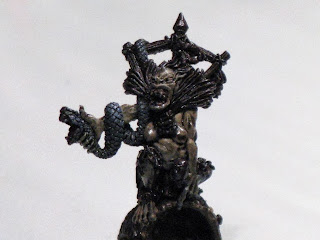 I went back over the grey flesh with elf flesh and the wood and hair scorched brown. Then used a chestnut ink/future wash. 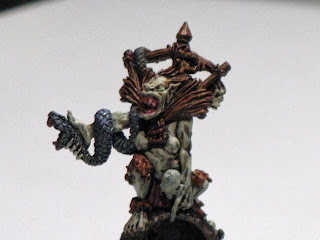 Later, I went over the flesh with a rotting flesh highlight. All the hair, fur and wood have been given a vermin brown drybrush. The mouth of the witch and ghoul have been touched up with red gore. The loin cloth was given a highlight of tanned flesh. 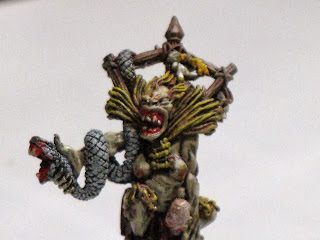 I went over the hair, fur and wood with a graveyard earth drybrush and then back over the hair, fur and chicken foot with bad moon yellow. I used a white on the skulls, the teeth, nails and voodoo doll. The wand skull and nails were a bit too bright so I went back over them with a chestnut ink/future wash. I went over the snake with ghostly grey and the snake mouth, eyes and witch mouth with a blood red highlight. 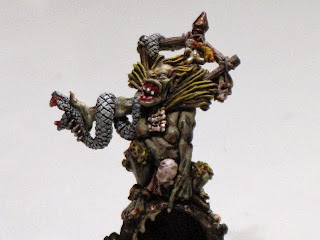 Final touch up were white drybrush on the snake, bone necklace, skull, teeth, nails, and Voodoo doll. I added a last elf flesh highlight on the loin cloth and used rotten flesh for the stew left in the cauldron. 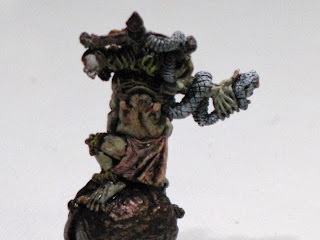 The rear view shows the loin cloth better and the talons digging into her flesh holding the frame on.

It is a nice model with a lot of character. I definitely don't want to wade out of the bayou on a moonless night to find her waiting by a fire next to the old moss covered shack in the clearing.

Great brushwork on a scary figure. Perfect for the month. Best, Dean

Thanks again, I have had it for a while just sitting in the painting queue.

What an impressive job on such a wonderful miniature.