Hi Kids,  Figured I's take a few snaps of the Olde Style 40K that are lurking in the Basement, awaiting their next chance for world domination.  Or maybe multiple worlds.  These are the bad boys I painted up maybe 25-30 years ago.  The squads are way too tiny to use in the current ed, although I guess you could use them all as truck mounted guys. 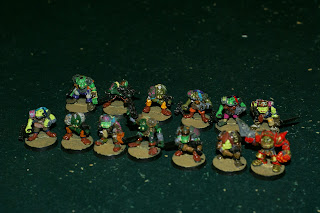 This first squad are the 427th Chevy.  Each guy is named after a different engine displacement; so we have LS6, 454, 396, COPO 427,etc.  One guy suggested I use small block numbers for the Grots, but I never got that far painting the Grots. 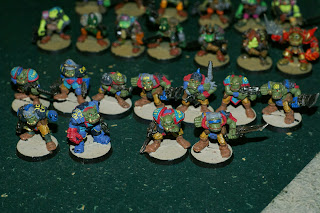 Named after a college course, there are the Chem 101 lads.  Maybe that should be 101st Chem. 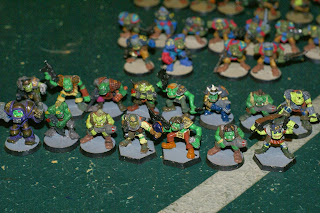 Out of the pages of The Book, the 10th SS Drop Legion!  Yeah, back then they used hexagon slottabases.  Don't know why.  And speaking of bases, the color of the base is how I could tell the squads apart on the battlefield.  No flocking, either. 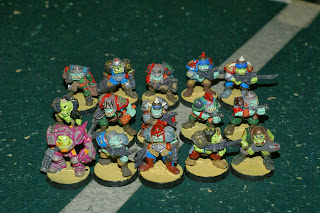 Named after some guy's nickname for his Risk army, the 13th Ju-Ju Warriors!  I think Ju-Ju might have something to do with either voodoo or African witchcraft.  Not sure which. 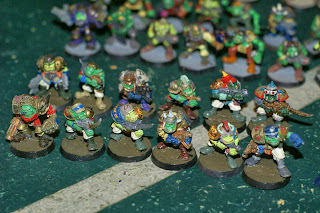 The Johnny-come-lately's for the RT paintjobs, the 1040th IRS are about 5 years younger than all the rest. Used more shiny metals like gold since they're named after everyone's favorite tax form. 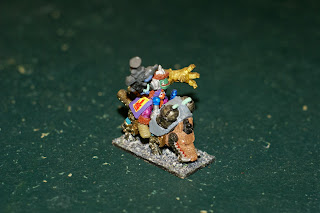 The Big Cheese of the Outfit.  The only Super Cyboar I ever owned!  He was so useless I really didn't need more than one.  In one campaign he managed to throw himself under tank treads every single game!  ("Anything but a one!" ring any bells?) 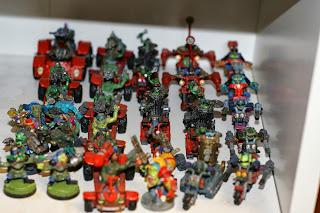 Decided not to bother taking the rest of the lads off the shelved for pictures.  There's just too many of them.  And this white background makes them turn up better anyway.  Here's the Biker portion of the outfit, along with a fistful of Mechanics.  MUCH prefer the original metal buggies and bikes over the newer plastic ones. 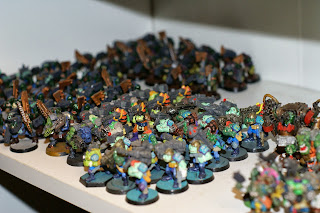 A couple editions ago you could field entire squads of heavy weapons, hence the blue based heavy squads.  In the background you can see a few dozen of the plastic editions; the squad in from is the 460th Fords. 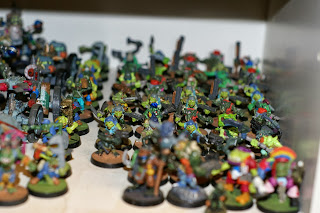 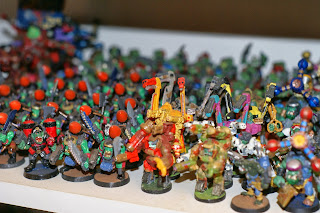 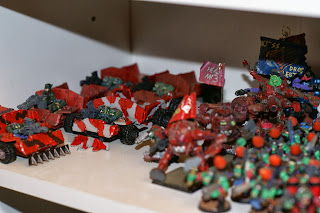 And last of all, some prior ed trucks next to the Dreadnoughts I posted about a couple months ago.  I like the camo paint jobs better than the simple red.  I still kinda dig these truck models, easy to build and paint without that current baling-wire-and-glue look.
So now is the tricky part; how many non-GW figs did you see?
Posted by Chuckaroobob at 8:30 AM