Hi Kids, Some of you might know that one of my favorite units of all time is the French Foreign Legion, and I tend to buy most of the books in English regarding them.  (Well, if I can afford them!) Martin Windrow has written quite a few of those books, and naturally the battle of Dien Bien Phu crops up every once and awhile.  "The Last Valley" is about that battle, and it is an absolute masterpiece!  It has replaced Jules Roy's "The Battle of DienBienPhu" as my favorite, and that's saying a lot.  If I had to have just one book about the French in Indochina, this would be the one.  Even if you have no particular interest in the battle, some of the descriptions of the military action are worth reading. It's been out in paperback for awhile now, so you kids should rush right out and pick one up!  I bet www.abebooks.com has 'em cheap!  If John Keegan digs it, its got to be good! 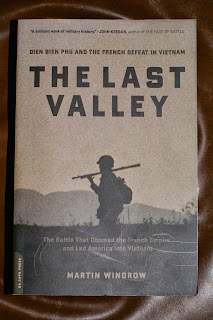 Posted by Chuckaroobob at 9:00 AM