A regular opponent Jim B picked up one of the Reaper Bones Clockwork Dragons. I used it in our Round 10 40k league game as a proxy Heldrake. My second Heldrake in that game was the Terrorgheist from my Vampire Counts army. 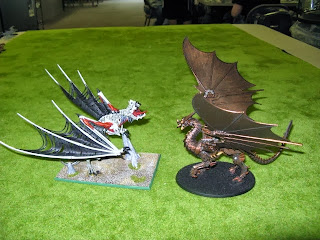 Jim has since based it and started painting it. I took a picture to show the comparable sizes of the two models. With the much better price point I might have to pick up two Clockwork Dragons for cheaper than one Heldrake. It also has an added bonus for use in other games, win win.

From what I can see, I like how the clockwork is painted up! Got to get around to doing mine sometime.

I am contemplating buying two to use as heldrake for my chaos marines.