I have been wanting to get one of the Amiri Iconic barbarian figures from Reaper for a while. I have been building a warband for Andy Hoare's Get the Girl, Kill the Baddies fantasy pulp skirmish rule set. A friend picked up a handful of the new Reaper Bones models and Amiri was among them. A quick negotiation and I took the model home. 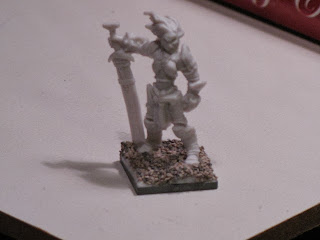 This is the first Reaper Bones figure I have picked up. I trimmed down the base and glued it onto a wargames factory 20mm base and flocked it with some medium sized grey railroad flock. 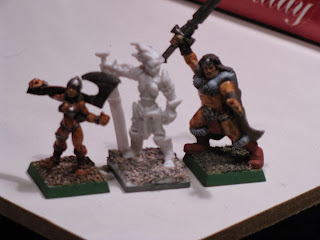 She is definitely a Heroic Scale figure. The model on the left is an old Celtos Axe woman and the model on the right is the old barbarian model from Talisman. The bases are about the same thickness so she would be about the same height as the Talisman Barbarian if he was in a more static pose. I have already primed the model and want to get it painted soon. She also has a backpack with spears in it but they are bent and I need to get them straightened and if I can't I will replace the spear shafts with wire.

Labels: Colkillgore, Get The Girl, Work In Progress

I'm about to get some Bones stuff home soon aswell, and have been reading up a bit on the material.

Regarding the bending, the consensus seems to be dip it near boiling water, straighten it out and then cool it in cold water (use pliers or tongs ofc), that should make it retain it's new form.

And regarding priming I'm very unsure, I've read alot of different experiences. Some brands seem to not dry correctly when used on the Bones models..
What brand of primer have you used and what result did you get?

I tried using krylon flat black and that isn't the paint to use. The Paint never dried and the model is now soaking in simple green to get it off. I talked to a buddy of mine and he said he had to scrub the bones models and then scrub them again. Then use a brush to base coat the model.

I will let you know in a few days when I have the model cleaned back up.