Thanks to a game it forward I received some Portsmouth 1/900 scale Napoleonic ships back in August 2011.  This is a post to show Chuckaroobob, Whom is a river to his people, that I have been working on the ships. 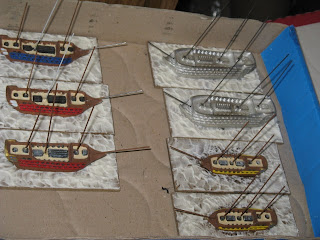 I have also received more sails and banners form J Womack at the Scattergun Gamer who originally passed the models on to me. I still want to pick up two of the large double deckers, and one or three of the small double deckers and possibly two or four more single deckers, so I can play more varied battles.