A buddies disgust with warhammer fantasy has benefited my Vampire counts army. He whom will not be named has decided that he will no longer play GW games and has put his extensive collection on the auction block. I wanted to pick up much more but by breaking the hobby budget, managed to pick up some nice models.

I have made much progress on my Vampire Counts since last October. Zombies, Scarecrows and a Wraith Oh My. The initial motive was to field an army for a 3rd edition fantasy battle game of Undead verses Chaos against ChuckarooBob. After the game I kept working on the Vampire Counts. I turned the idea toward fielding a Vampire Counts army using the current 8th edition book. Since I don't have the current Vampire Counts book, I went to the forums and watched a few local Vampire Counts players. With the models I have I could make a few competitive builds but one thing I lacked was a horde of crypt ghouls. 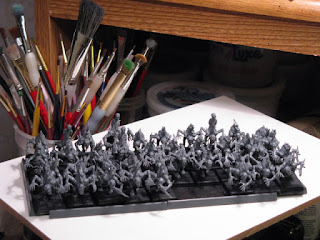 I lack no longer. With the twenty or so of the old oop metal ghouls I already had the new lot will give me over sixty ghouls to work into a list, and if you are going to field a bunch of ghouls who better to lead them than a Strigoi Ghoul King. 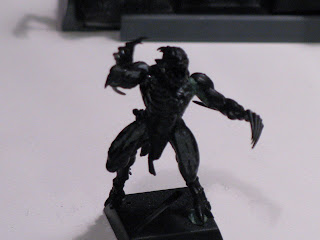 Thanks to extra bits from a Terrorgheist I picked up at a local game day swap shop, I had the bits to the Strigoi Ghoul King from that kit. The pose was made to go on the back of the terrorgheist and not fit on a 20mm base. I repositioned one leg and arm so it would fit on a regular base and be able to rank up in a unit. 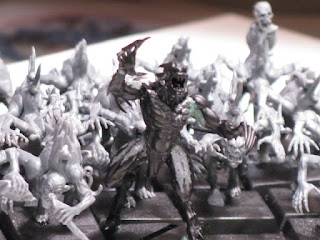 The Strigoi Ghoul King ready to lead his horde of ghouls in search of flesh.

I guess I am going to have to buy the army book eventually, but I will get these painted first.

Looking good, I really like ghouls and the Strigoi have always occupied a special place in my imagination.

I like the new crypt ghouls. I have a bunch of the old metal one but the new plastics look much more corrupted. The added bonus is that a horde of them seems to be an almost auto include in most competitive Vampire counts armies. Whether or not it is for me will have to wait till I get a few games under my belt using them.