Tilean Warband from the 2009 Mordheim League

back in 2009 I played in a Mordheim League organized through the GameOnGw yahoo group. I went with something different and chose to play a Tilean Warband from the Lustria campaign setting in The Town Cryer. I play a bunch of games but the league ended up winding down. Recently some of the local gamers have been talking Mordhiem again and putting some Warbands together, so I searched in the Closet of Doom and brought the Tileans back into the light. 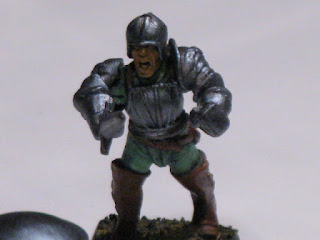 Captain Silvio. He started out armed with a rapier but after almost getting filled in the first few games He decided to put the rapier in storage and up armor. 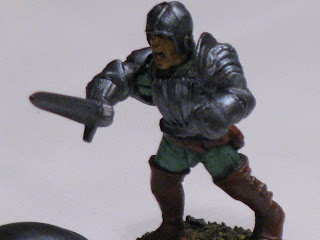 He is still a work in progress like the rest of the band but I really like the model. He is made from collection of bits, empire soldier, militia and knight. The shield is one of the old spearman shields that I saned the lion head off of. 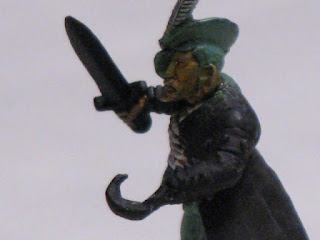 The unlucky youngblood who lost his hand. He was originally armed with a two handed hammer but once his hand was cut off, the hammer went into storage. He managed to get the latest technological advance and had a hook put on the stump. He is made from the empire militia bits and the hook is off of chaos vehicle spikey bit sprue. 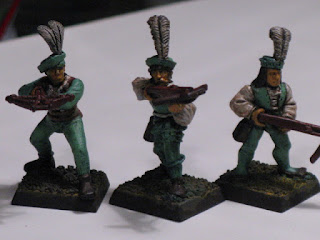 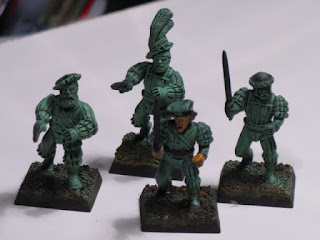 A planned expansion to the warband was adding more Tilean swordsmen. They are all built with various empire plastic bits. 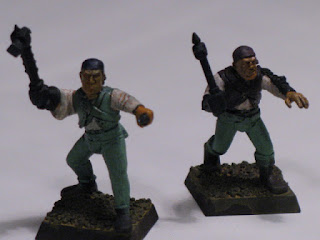 The two Tilean heroes. I skimped on their equipment and was waiting till I picked up some more advances before fitting them out with better equipment. I stuck to the hammer and dagger combo that for both. 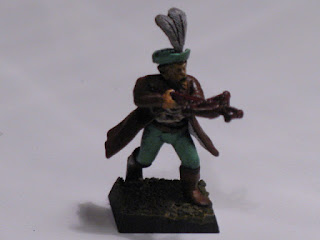 "The Lads Got Talent" Tilean crossbowman. I lucked up and rolled "the lads got Talent!" for my group of crossbow men and built this model to represent him. He is made from the majority of empire militia parts and a bit of greenstuff to make the hat more Tilean. 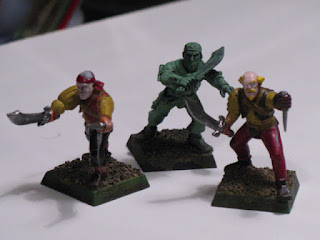 The good ole wharf scum. They started as a henchman band for my Marienburger warband but were in the process of being repainted into the Tilean colors. I had built them quickly and left most of the mold lines on the models so I am cleaning them off before a prime and repaint. The bits are oop empire soldier and empire militia. The swords are actually from the long oop skeletons. I wanted scimitars too add a bit more exotic style to the Marienburgers and they fit right in with the Tileans too. 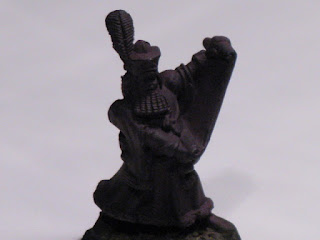 Bad picture but the other young blood for the warband. He is an Alchemist from the wizards box put out for Warhammer Quest/ talisman. My plan was to give him a magic tome if I could ever find one. He is modeled with a mace hanging from his belt on the back and is just a cool model. 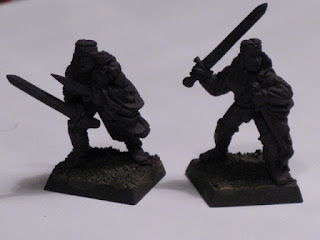 The Tilean warband allows you a couple tilean Duelists and I couldn't resist. Both models are from the oop Vespero's Vendetta Dogs of War unit. They use two weapons and parry with their cloak, whats not to like. 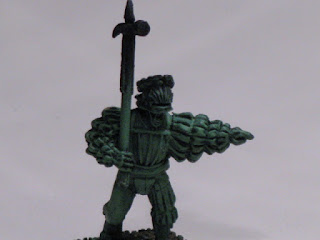 One of my favorite models. It is the command model from the oop empire swordsman unit. It is made from the plastic torso and legs of an empire soldier with the metal arm and head bits, He has been in my Empire army for a long time but I wanted him better painted so I decided to use him as a upgraded hero model.

One thing missing from the band is Pikes. The league organizer okayed the Tilean warband but said the pikes were a bit over the top, so no pikes. Conveniently, I already have a unit of pike men, I converted from Empire spear men to use in my Dogs of War army back in the day. So if I want to add a group of pike men to the Tilean warband all I need to do is pull some from that unit and onto the table.

I remember those guys! I think we were the only two who wanted to play in that 2009 league.

I think you are right. I still had fun and now that they are back on the painting desk, I plan to work up another warband for some games.