Another battle report from the Charlotte Flames of War game day on 25 May 13 at PBKW.

This time a change back to Late war and 1500 points. My list was a Guards Heavy tank company with eight IS-2s with tank escorts, a pioneer platoon and a Zis-3 artillery batalon. Against me a German late war army lead by a Konigstiger and backed by Stuka air support. 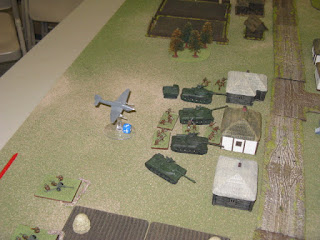 I moved up the IS-2 behind the building to get cover from his Panzer IVs and double timed the pioneers to keep up with the tanks. The German player got his air support and killed several of the pioneers. 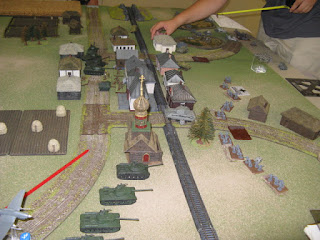 The other group of IS-2s move up playing cat and mouse with the Konigstiger in the center of the town. His Stuka returned and I managed to drive it off with IS-2 companies AA machine guns. 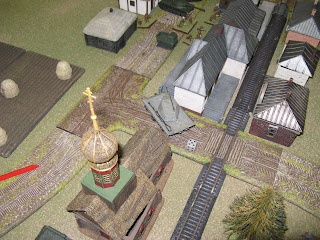 The Konigstiger moves up to shoot the IS-2 but it line of fire is blocked by the pioneer truck. 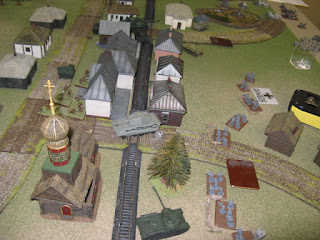 The Konigstiger caught in an IS-2 crossfire. The lower IS-2 aims at one flank and another IS-2 aims down the tracks at the other while the Pioneers get ready to assault. Both IS-2s miss and the pioneers fail their morale so don't assault. One Is-2 assaults the German infantry, wins and they pull back. 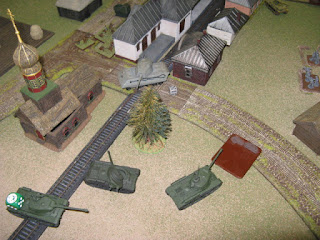 It was an interesting game but the German player seemed distracted and gave me the win.

Things I learned, Konigstigers can't be touched from the front by anything the Soviets can field.

Ah, how the designers love the tigerboys!

I have something I am working on to make the Tiger boys cry.