Hi Kids, Got something a little bit different today:  La Bataille D'Austerlitz!!!!!!  This version is from Marshal Enterprises. I think they printed up about 1000 copies of this bad boy in 1980, and those lads from the Yadkin* Valley** Wargamers*** are just the bunch to play it!  Just think of it guys, a game which doesn't involve 1000+ miniatures costing $2000+ and taking 3+ years to paint!  Yeah, I could get behind that.  There are about 6 guys in the group right now, it fluctuates wildly depending on health, wives, kids, jobs, the phases of the moon and gaming preference.  They've been playing every Monday night since about 1985.  They've done everything from SPI's "Highway to the Reich" to Mayfair's "Family Business" card game.  Anyway, here's the situation: 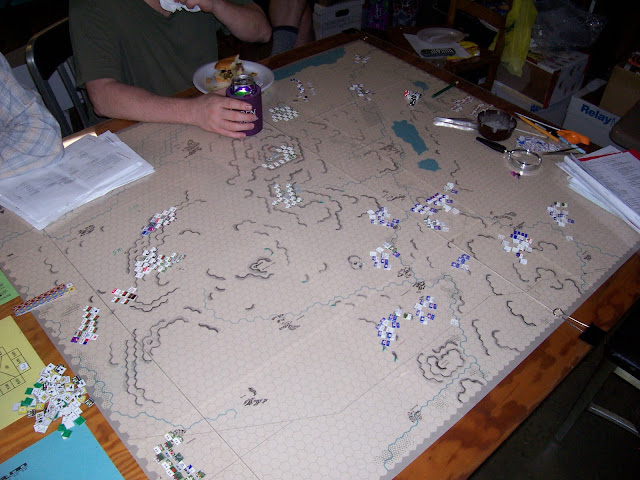 IIRC, this is looking southwest, you can see the lakes, the blue counters are French and the rest are Austrians and Russians.  They've only been playing for two or three sessions, its early in the day and the armies are just moving into position.  Counters are usually battalions and regiments, or generals. 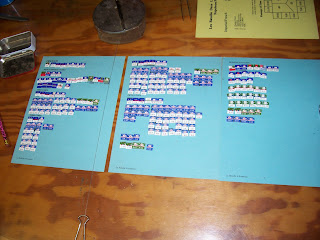 Blue, so this OB is for the French.  These are reinforcements. 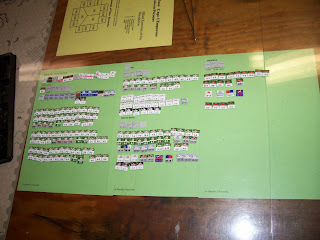 Same again for the other side.

The lads just finished playing Lutzen, and it looks like they are on a Nappie kick.  I suggested they play the battles out in timeline order, but I think they are more interested in just doing whatever they feel like after this one.  Last year they spent 10 months playing AH's "The Longest Day."  And also played the Some Turkey Games' classic "A Fistful of Turkeys," so their interest pretty much runs the gamut.  In fact, one of the lads converted Turkeys and SJG's "Globbo" to miniatures and ran it at a con last year.  Those two appeal to kids of all ages!

If you want to join the fun, just leave a comment.  The more the merrier!

* For those "not from around here," the Yadkin is a river in North Carolina.

** Personally, I do not think the Yadkin River has a valley.  Maybe further up in the mountains, but not around here.

*** I wanted to call the outfit something cooler, like the "Winston-Salem Warlords," but was shouted down by more robust lungs.  I mean, damn.  At least some people have heard of this town, even if they just think it's the name of two packs of cigarettes.  Nobody more than 25 miles from it has ever heard of the Yadkin River.

Posted by Chuckaroobob at 12:45 AM

It looked good and cheap!

I've heard of the Yadkin river, and I live in Washington State...
Scott A.

You are correct. Only 1000 made so they are somewhat rare and expensive.
Please look at our the Marshal Enterprises website.There are articles, game aides and free games for download. Also the last copies of the new game La Bataille de Leipzig 1813 can be purchased there. Only 400 copies were printed.