Zombies, Scarecrows and a Wraith Oh My.

October is here and in the spirit of Halloween I have pulled out some Vampire counts models to work on. These have been on the painting table for far too long and I think I will finish them off this month. 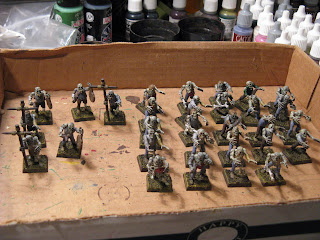 More Zombies for the horde. I built these when the sixth edition Vampire count army book came out years ago. They added the option of a standard and musician to zombie units so I built three sets and another twenty four zombies. When I get these done I will be able to field three thirty zombie strong units. 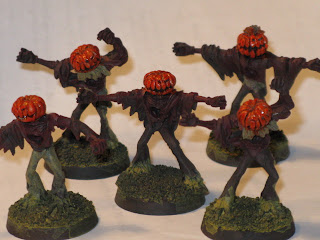 The scarecrows are actually henchmen from a superhero range. I picked them up to use as Wraiths. Once again when the sixth edition Vampire count army book was released they changed wraiths from a character to a unit lead by a Banshee. I wanted more wraiths and these were much more economical. 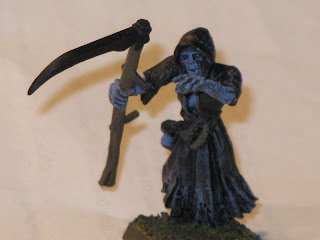 Last is a Wraith conversion I built years ago. The bottom is from a Wraith I cut in half to make a mounted Wraith. The torso is the hanging torso from the old Zombie sprue and a couple zombie arms. Last I added a greenstuff robe to blend the torso into the lower body.

I want to finish them by the end of the month and maybe take my Vampire Counts over to Gaming Underground for their Wednesday night open gaming.

Thanks, I have since added a unit of oop grave guard, a few more skeletons and several Lahmian Vampires to the painting queue.

Hmmmm..... Zombies, Jackozombies, ghouls, wraiths, conversions; all looking good. But somehow, something, just seems to be lacking.... Perhaps I missed it.....