Vampire Counts October has me digging around in my collection of old Warhammer blisters. One thing lacking from by army was Grave Guard. I really like their Killing Blow ability and back in the day picked up a few blisters cheap from one of the many local store closings in 2005. 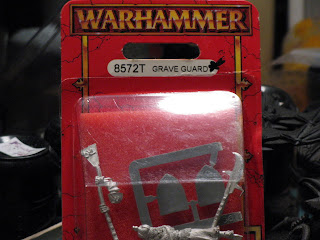 A blast from the past. I contemplated selling them on Evilbay but after checking how much they cost now ($41.25 for ten models) I decided to keep them and get them on the table. 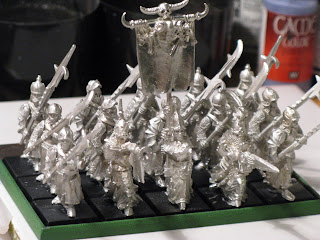 The Grave Guard assembled. The command models are from a later release but they work for me and bring the unit up to fifteen models. I would really like to field them as a larger unit and will probably fill the back ranks with some skeletons or tomb stones when I want to go big. The bad thing is that grave Guard no longer can take halberds. They also have a shield strap molded on them. So,I have been told, the current Vampire Counts book allows Grave guard hand weapons and a shield but no shield if they have great weapons. I am going to put shields on them, much easier than trying to grind the straps off and you never know when GW will add back the option for Grave Guard to have halberds in the next army book.  I plan to just make sure my opponent knows what I paid the points for them to be equipped with before the game starts. 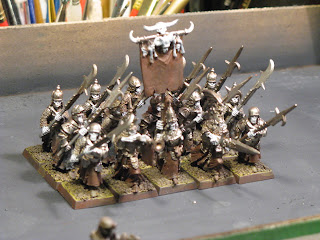 The Latest shot of the Grave Guard. Still very work in progress but good enough I would put them on the table for a friendly game.

I don't want to sell them. I tried getting some more on ebay a little while back but the price went out of my budget. I plan to use them and bolster the unit my third edition skeleton grim reapers.

Would there be a price you would be willing to sell it at?

I really like the figs and don't want to sell them. I have had them for a long time and I really enjoyed finally getting them on the table. The figures are classics and much better than the current plastic grave guard models, so if I sold these I would regret it when I wanted to get some more in the future.

They come up on Ebay from time to time, you just have to keep a watch out. One lot just sold last week for under $50US.