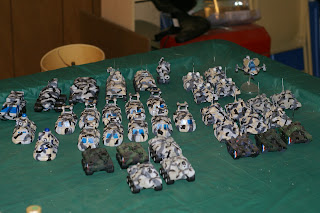 Hi Kids,  I'm in a picture-taking mood and dug the Ogre Macrotures (aka 1/60 or 25mm) out.  Admittedly very few of these are actually miniatures from the Ogre line; in fact, only the 10 GEV's are from that game.  The Proxy King strikes again!  In my defence I'd like to point out the GEV was the only one ever made, no other tanks from Ogre every made it to this scale.  The other stuff is all avaliable in 1/300, see prior post.  So I went out into the marketplace and dug up some stuff, mainly based on what looks cool. I know 40K stuff looks cool, but that can be a blog all its own.  So here we have two shots of the whole lineup.  Yes, once again we see the world famous triple grey & black Imperial Army camo of the 13th DBLE.  I know, I know, how long is it going to take for me to get off my butt and paint the rest?!??!? 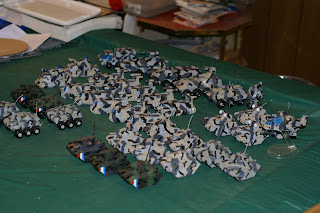 The vast majority of these vehicles are from KryomekUSA.  All their vehicles are interchangable, by that I mean the type of vehicle (tank, APC, assault gun,etc) can be ordered with any of 4 suspensions (tracks, wheels, grav, or hover).  Also, they are an absolute snap to put together, maxxing out at something like 12 parts. They also make a wide variety of alien bugs and human sci-fi figs. Yes, they are still in business, for those of you who want to finish off your bug collections. 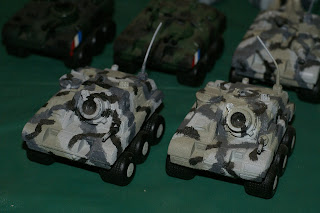 These are the Assault Guns.  I choose to get mine with wheels.  Not really a very impressive looking thing, I think they could use a bigger gun. 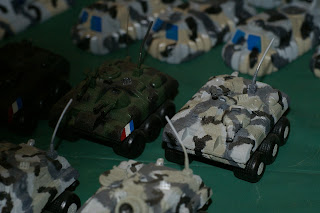 APC's.  The two on the left are in the original camo, back when I was using them for 40K.  Sorry, I just never liked the Chimera design.  Sacrilege, I know. 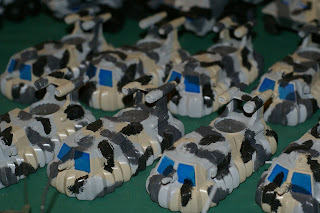 Brace yourselves, and honest to God Steve Jackson produced vehicle! 10 GEV macrotures, which means 1/60 scale.  Only WestWind produces vehicles in this scale, and they only do WW2.  Every once and awhile somebody else makes a plastic model or diecast vehicle in this scale, but they are rare.  I was just checking ebay, these bad boys have sold for $76-80 each.  Holy Cow! 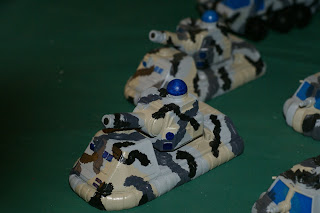 For those diehard Ogre fans, two Chi Cub's! A GEV with an arty on the back. This vehicle was from an article in SpaceGamer magazine or the Ogre Book, I can't remember which.  Actual models are from Ground Zero Games, but they have sold the 25mm molds to someone else.  Go Toronto Bluejays! 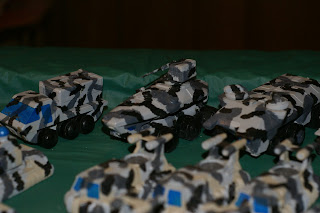 A normal cargo truck, and two APC's from Ground Zero Games.  Yes, I need more cargo trucks!  Got a few around here someplace.... 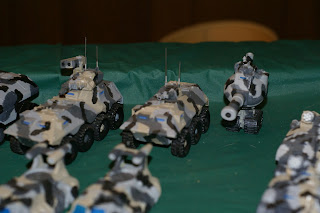 Two APC's from Ultra-cast.  Unfortunately, they closed before I got off my butt and ordered more.  I really like the 6 and 8 wheelers they made.  That thing on the right, I just can't remember where it came from.  Maybe Armorcast?  It looks like it could proxy a Bopper from the Rivets game, but I can't imagine any other use.  Rivets, now there's a game I haven't played in years!  At one point Martian Metals produced minis for it in 1/300, but that was a looooooooooong time ago! 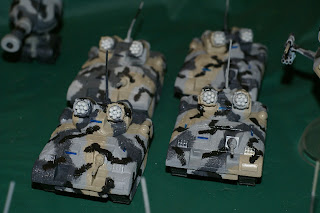 Missile tanks, with tracks!  I just like the way they look!  I wish I could kitbash a mobile howitzer, but it would be tough to get that Zermitt paste look so common on Kryomek stuff.  If I could just get ahold of some kinda large gun, I could mount it on the rear deck of one of these.  Hey, Scott, you have a lot of spare time..... 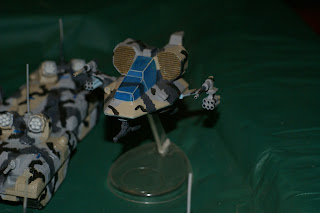 Another Ground Zero Games kit, a VTOL Gunship.  It has no place in Ogre, but it looks cool. 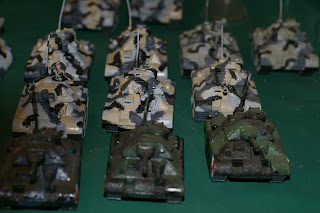 The first Krymek stuff I ever bought, Main Battle Tanks, complete with tread suspension. The three in the front row were painted for my 40K Marine stuff, and you know what they say, "Death before repaint!"  The rest are what I used back when the Armored Company first came out for the Imperial Army.  At the time I had intended to paint numbers on the side to identify them, but then I realized that would take effort.  You know the rest....
Now I know what you're thinking.... what about all those VOID & 40K & assorted vehicles that remain paintless?  I'm a slacker.  I can only do so much.
A few of you might remember my dream of playing "Backyard Ogre," where we take this stuff out into the real world and play a game, maybe using 1 yard = one hex.  I still need to paint up the rest to make it a reality!  Like all those Heavy Gear Rafm 1:87 to use as power armor infantry.  Or maybe I could use all those Kryomek biped robots!  The only monkey wrench in the plan in what to use for an Ogre.  The Bauhaus Grizzly would work based on number of guns and sheer size, but I wish some maniac out there would produce an Ogre in 25mm scale.  Remember Sci-fi City and those 4 foot long MkV's?  Those were the good ole days!
Posted by Chuckaroobob at 12:03 PM