Vampire Counts October has provided more fruit. The Wraith is another slow burn project I first started the conversion back in April 2009 Work in progress . I finally finished up the sculpting and finally it is painted. 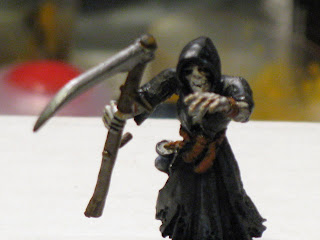 It will haunt the painting table no more and now has joined the other Wraith on the barrow mound in the display case. 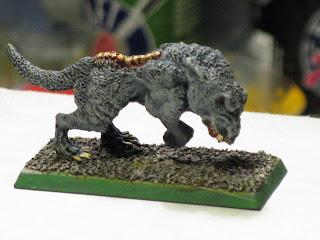 I finished a few details and a final dry brush and the Doom wolf is complete. I originally received it in a trade mixed in with some chaos hounds but it was quickly reprimed and the painting started. Like too many other models, it was pushed back and languished on the painting table for way too long. It has now joined the pack of Dire Wolves in the Display case. Its addition gives me twelve Dire wolves now so I can run them in two packs of six both lead by a Doom Wolf.

The month isn't over and I hope to finish up a few more Vampire Count projects before it is.

Read through the backlog of Vampire articles, everything looks great. More impressed at the speed that you've done it in. Keep it up.

Thanks, I don't know about the speed, most of them have been works in progress for years. I finally set down and put the finishing touches on them.