Hi Kids,  Its time for another instalment of progress at the painting table. First off are some Old Glory 25mm Pershing in Mexico US Cav.  My bud Chris H. (now running Sash & Saber minis) sculpted these guys, one of his first projects for OG!  Since we've been messing around with SPAM War and Mex Revolution type guys I figured I'd get a bag and see how much damage I could do. I like these figs a lot, something about Montana hats and decent rifles. No more SPAM War Krags! This was also my first attempt at painting "pinto" style horses.  Decided to use Army Painter Quickstain, too. 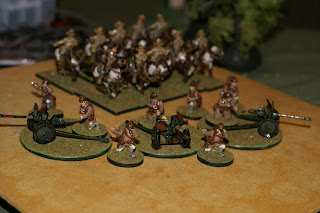 Here we have some 25mm Crusader France 1940 figs, specifically 25mm ATGs and crews.   Most of my figs for this time period are Artezan French Foreign Legion types, so I went with the white pants hoping maybe they'd blend in a little better.  The guns are mounted on huge washers, I've had it with guns falling apart. Hopefully the extra structure (and the epoxy!) will keep these things in one piece. Still working on the HMG's and mortars. 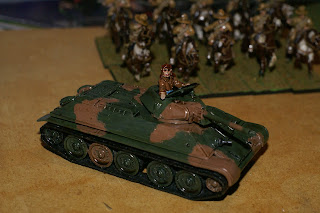 One good thing about playing The Rules of Satan (aka Bolt Action), it got me in the mood to play some Real WW2 games using Disposable Heroes!  Naturally you can't just play with what you got, you gotta build more stuff! Also naturally, the Basement of Heaped Miniatures will provide!  I did some digging and came up with a fistful (about 10) West Wind 1/60 (wish they were 1/56!) vehicles. This early model T-34/76 was on top of the pile, so got first dibs with the brush.  I know Soviet Armor Green (aka KV1 Green) is an accurate paint job throughout the war, but I dig camo and had to blotch it up a little. Some Armystain, too.  It's kinda funny, I have this T34 and some Company B monsters (T-28 and T-35) but I do not own a single Russian infantryman.   I'm not sure that I ever wanted to do the Eastern Front, but I bought the earlier vehicles expecting to use them in pulp games.  Now I'm debating buying some infantry, but do I really want to add to the lead mountain?  Eye-yi-yi.....  I'm nearly finished with two Pz4 H (West Wind) and a Company B Sdkfz 231. I really dig the 231, one of the few 6 wheeled German armored cars. Actually, I guess it has 10 wheels, but only three axles.  Usually I'm not this hot and bothered to paint, but I couldn't round up any of the usual suspects for a game, something about birthdays, anniversaries, and War$ Fantasy.  Ah well.  Maybe next weekend.  If this painting keeps up I could start working on those dozen+ Hun Motorcycle troops and have a nifty new unit!
Posted by Chuckaroobob at 12:19 AM

You dn'a have to add to the lead mountain, you can buy some of the new plastic Soviet infantry and start a whole new pile.