A Vew of Things to Come,

I picked up a half built, partially painted Terrorgheist model at the last GameOnGw Games day. the model didn't have a base, so I bit ordered one. When it arrived, I started trying to finish assembling the model like it appears on the box and found out that whomever started assembling it had a different plan than the regular box assembly. 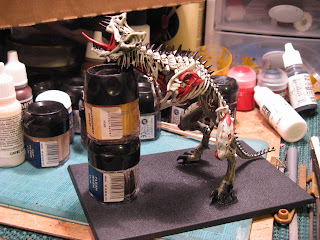 After a bunch of hit and miss, trial and error, with an emphasis on the error part, I managed to get enough of the parts to fit to make a workable model. I glued it on the base and I am going to have a rampant terrorgheist, instead of the crouching one pictured on the box. It is one of the facts of buying second hand models but I can live with it.
The main body is well painted but I need to go back and greenstuff several gaps and take off some mold lines. The wings are going to have mold lines removed from them too before I finish painting them. Then they will need to be pinned on because the rocks that come with the kit are too short to help support the wings. I need to add something to the base and may use some spacers to make the rocks tall enough but that will be later once I have finished painting it.

I have wanted a Terrorgheist for awhile and once it is finished I think it will make my Vampire Counts a bit more competitive.

Great model, never say it before thanks for sharing this monstrosity!