I recently took my Imperial Guard Adeptus Mechanicus army to a 40k tournament held at                 Gaming Underground in High Point NC. My third game of the tournament was against one of the store owner's Tytranids. 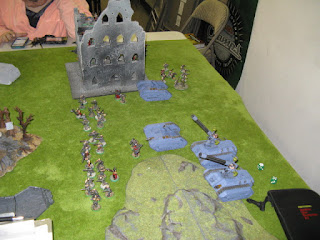 I set up the Adpetus Mechanicus army to try and make a run for the center objective. 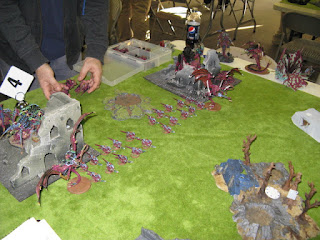 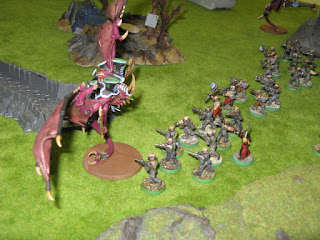 The Hive tyrant was on the platoon turn one, so much for my plan to go for the center. 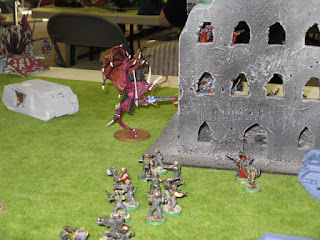 The Harpy heads for the troops bunkered down in the ruins with the friendly objective. I rolled the Conqueror of cities and every unit had stealth ruins and that would end up playing  a big part in the game. 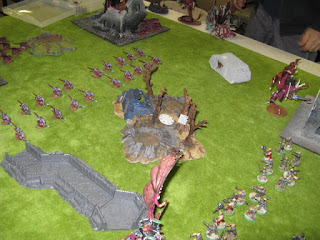 The rest of the swarm moves out. Two of the tervigon rolled doubles so they were done breeding gaunts. 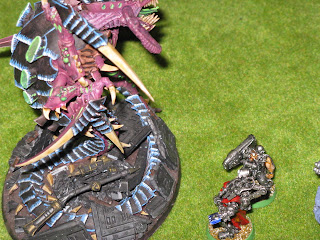 The Mawloc appeared and made a bad day for the Enginseer. 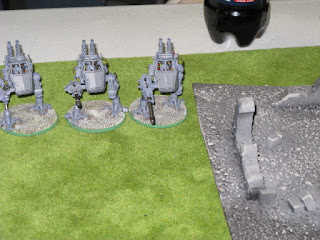 The sentinels arrive on the tyranid deployment zone to try and budge the tervigon and a gaunt brood off of their objective. 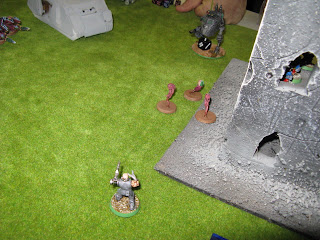 The only guardsman left from the infantry platoon made an end run to shoot up a spore mine cluster. The armored sentinel in the background is immobilized from from a hit from the mycetic spore that dropped behind the building with the Doom of Malan"tai. The Doom burned up a bunch of my other infantry platoon and had built up ten wounds when he failed his save against a lascannon hit and was instant killed. Then the plasma platoon command squad destroyed the mycetic spore. 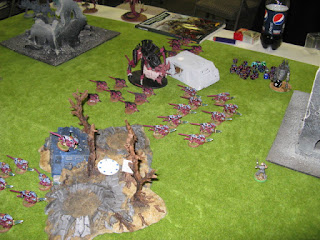 The lone guardsman holds the line, but not for long. The last tervigon rolls doubles so no more new gaunts. I dropped Marbo in and he dropped a demo charge on the death leaper and killed it. The next turn a bunch of gaunts gunned him down but that is how it normally goes. 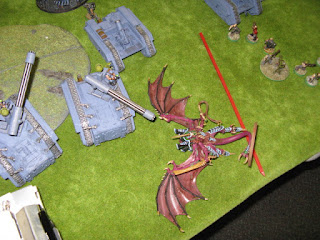 The Hydras manage to bring down the winged Hive Tyrant. The infantry squad in the back is one that ran from the Doom before it was taken out. The lone plasma cannon servitor is in front of the Griffon mindlocked waiting for the mawloc to finish it off. 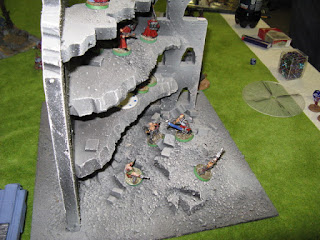 The Plasma platoon command squad spreads out to avoid a large blast. 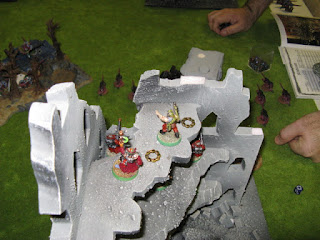 The Tyranids last hurrah. I had forgotten to fire the griffon one turn and that allowed the swarm of gaunts to get in range of the tower. They fired on the camo cloaked company command sniper squad the primaris joined. All the veteran sniper were killed but I look out sired all the hits on the Primaris over to the Company commander with a camo cloak and stealth ruins. Both ended up taking a wound but they survived.

The game was a lot of fun but the Tyranids won it five to two. It ended up a much better result than I thought it would be when the first Infantry platoon was burnt down turn one. It was the first time I had played against the Doom of Malan'Tai and I now understand why tyranid players love it so.

To sum up the day I had an overall good time with two fun games. Much better than the last one I went too that put me off tournament for years. If I bring guard to the next one it is going to be with a brand new plan. what is more likely is I will delve into the Chaos collection and bring either a Chaos Daemon force or Chaos Space Marines.

I always get clobbered by Ts.

Mind you I get clobbered by most all armies.

it was my first game against Tyranids in years. I went into it with little idea of the amount of shooting the Tyranids could put out and just how bad the Doom of Mal'antal was. If my opponent had not rolled doubles for his Tervigons and shopped breeding gaunts, I really would have been in bad shape.