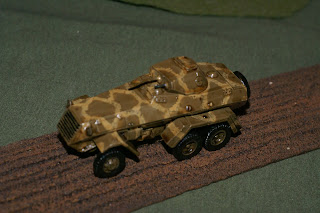 Hi Kids, Here we are with another dull installment of painting progress.  Some of these things have been sitting around since 2006, guess its about time they got some attention. Everything is the One True Scale, 25/28mm.  First off is a Company B Sdkfz 231 in 1/56.  A couple coats of PollyS and walla!  I've always thought this car looks pretty neat, too bad they were only used early war.  They were soon replaced by all the 8 rad ACs.﻿ 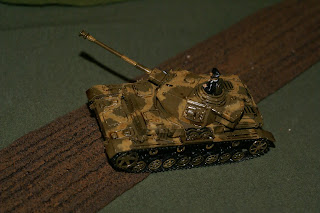 Here we have a West Wind 1/60 Pz 4H.  I decided to do away with all the bazooka plates.  Aside from expecting them to remain attached for all of  5% of a game, I just don't like how they look.﻿  I think the Pz4 looks pretty sexy without them.  I painted up two of these bad boys. 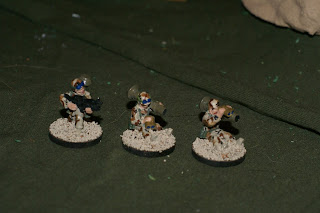 A shot of 3 The Assault Group USMC anti-tank gunners.  These have been painted up for a couple years, and have even been in games, but I finally decided to forget about the multi-man scenic bases and just mount them on singles like 99% of my other figs.  Too bad the camo doesn't come across well in this pic.  I really dig the chocolate chip look.﻿ 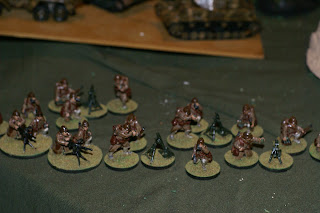 All the Crusader 1940 French weapon teams.  There are two types of mortar (81mm and 60mm) and two HMG's.  I expect to use these lads in a game this weekend and was really hot and bothered painting them up.  I hate working under a deadline!﻿ 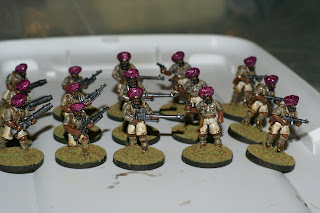 Finally, we've got a fistful of Pulp Miniatures' Sikhs with funky weapons.  I think the huge gun in the center might be a Boys Anti-tank rifle!  The Bren gun is second from left, and looks much smaller.  I really dig Pulp and Copplestone figs, and will probably get a lot of use out of these dudes.  I can use them with the Brigade Games WW1 Sikhs﻿ from their Mesopotamia/Palestine range, I painted them to match.  Come to think of it, we're definitely overdue for some WW1 games around here.  I didn't paint up all those Brits and Turks for nothing! Gallipoli here we come! And of course, if we ever get that Kneecap Island pulp campaign going, they're a natural!
All in all I'm really happy with the large amount of figs (at least for me) I've painted this January.  I can go for months without picking up a brush. In fact, that would be a lot more usual.  After last years negative TMP Pledge totals I think I'm off to a solid start. Too bad I'm going to Cold Wars and will put myself into the negatives in March.  I would like to get some more Early WW2 stuff like ATG's and a few more tanks. Maybe even a few Russian Infantry, but you never know.....
Posted by Chuckaroobob at 1:15 AM

The Island trader was at the bar last night. He said he steamed past Kneecap Island and saw fires and could hear the drums. He was going to stop for some fresh water but keep going. Something has the natives stirred up.