Started on group of horde warriors from Tin Man miniatures for some Barsoomian Gaming action. Tin Man was running a sale and I piggy backed an order with Chuckaroobob to get the free shipping. Tin Man calls the models horde warriors but they are actually "not" Tharks from Edgar Rice Burroughs's John Carter of Mars series. I have been wanting some Tharks for some Martian Pulp gaming but never picked them up because of the price, but no more. 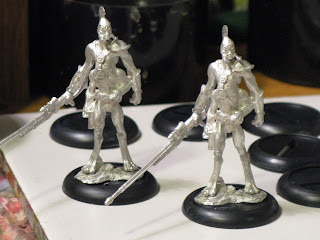 The first two assembled Tharks. The models went together really well, with very little flash or mold lines. I added the plastic bases from my base supply. Tin Man only has two poses one with armed a rifle and one armed with a sword. I chose to buy all rifle armed ones. They are going to suffer from the same pose syndrome but I can live with it. 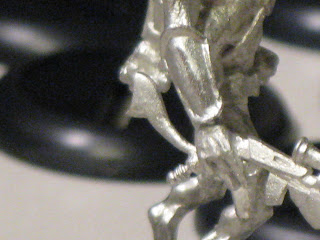 The one problem I found with the models are the very thin rifle stocks. The first rifle came off the sprue easily, 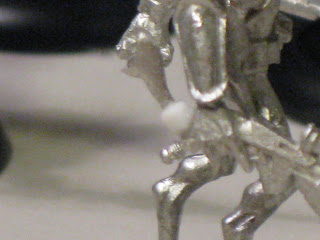 But the second one cracked when I started taking it off the sprue. The stock was too fine for me to pin but I drilled out a piece of styrene rod and used it as a connector between the stock and the rifle. I filed it down a bit and once it is painted it will just look like a band on the rifle stock.

The funny thing is that Bronze Age Miniatures is running a sale on their Barsoomian themed models until 10Dec2012. They call their "not" Tharks Wasteland mutants in their 32mm Sci-Fi Range. The Bronze Age Tharks are beefier and have more poses but are more expensive than Tin Man.  I am still debating picking up a couple of the Bronze Age Tharks to be war leaders for my Tin Man Tharks.