A lost model finally turns up. Years ago, I found a super discounted die cast Polkikarpov I-16. The box said 1/100 scale so I bought it to use as air support for my Soviet Flames of War army. The base on the plane though, says 1/74 scale but close enough for me. 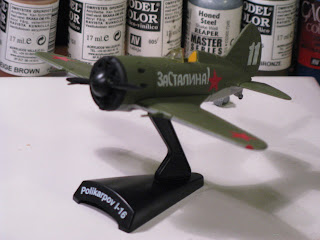 I had waited to field the I-16 and packed it away during the last move between houses. Fast forward a few years and me finishing painting an Interwar era Warlord Chinese army. I remembered the I-16 and went looking for it in the Closet of DOOM. I didn't find it. So I started a systematic search of every box that had models or gaming materials in it. I found all kinds of other stuff I had looked for before or had forgotten that I had, but no I-16. I concluded that I had misplaced it while traveling with my Flames of War army and despaired.
Then a little while back I was cleaning the mold lines off of a model and zippp, the bit flew out of my hand and bounced off the wall behind my painting desk. So I grab my flashlight and crawl behind the desk and low and behold I find the I-16 box. At some time I had set the plane's box on the shelf under my desk and in moving stuff around had knocked the box off. It has been behind the desk for years and I thought it was long gone.

Now it is back and will show whomever the warlord decides, the error of their ways.

Sexiest plane ever made!