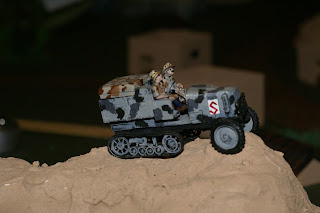 Hi Kids, Just thought I'd bore everyone to tears with all the latests goings-on here at the Basement of Heaped Miniatures' painting area.  Some of this stuff has been finished for quite a while, but taking pictures is like eating potato chips; once you start it's hard to stop.  First off is a snap of Company B's 1:56 Citreon B2 Halftrack. According to their info, this was one of the first vehicles to cross the Sahara desert. It's the perfect Pulp vehicle.  I really dig this thing.  Maybe I should've added a machine gun for the passenger to operate. Guess it's never too late. 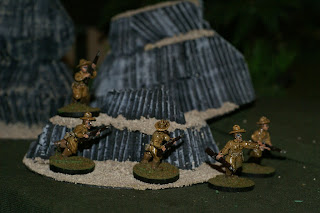 Here we have my newest addition; 25mm Old Glory Americans from the Pershing in Mexico line.  I painted these guys last week for a Disposable Heroes game.  Their uniforms were rather plain so I tried using that Army Painter Stain.  I think they turned out pretty good.  Yes, I still only block in the colors. I refuse to blend, mix, stir, layer, highlight, or use non-metalic metalics.  Since I'm one of two gamers I know who paint at all, my figs still look better than 99% of everybody else's. 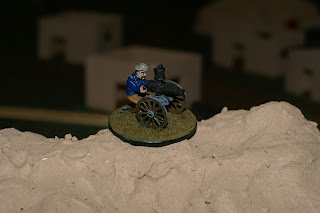 What could this be? Truly, it's a 25mm Tiger Miniatures Spanish Gatling Gun from their Spanish-American War range.  Since this gun looks a lot cooler than the US Gatling I painted this one up as an American one. I'm not sure if I'm ever going to actually game that war, I'll probably just use this stuff in assorted pulp games. So sue me. 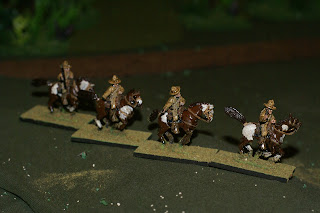 These are the mounted Americans from Old Glory's Pershing in Mexico line.  My first attempt at painting pinto type horses. I think they came out ok.  Once again Army Stain to the rescue! 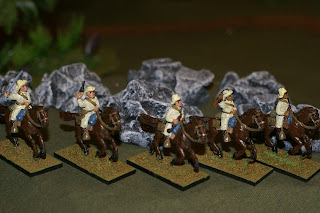 Tiger Miniatures' Spanish/Rebel cavalry from the Spam War.  I didn't stain these guys, still thinking about it.  What do you guys say? 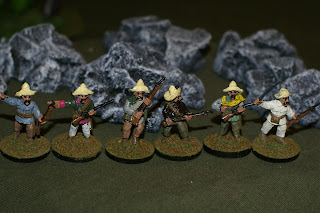 Tiger Miniatures' Mexicans.  For some reason these guys come in bags of ten rather than 5 like everything else Tiger makes.  Oh wait, that guy on the right is a Spanish/Cuban Rebel from the Spam war. No stain here. 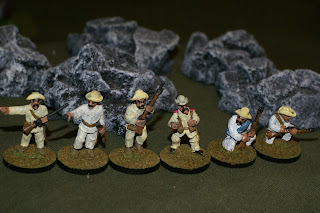 Here we have a few more Spanish/Cuban rebels from Tiger. The dude with pink epaulettes is one of the crew from the stolen gatling gun.  Yeah, he looks a little pissed. With his hand positions maybe I should make him into a standard bearer.  I'll have to check and see if the command groups I haven't painted yet already have any.  Once again we have a complete lack of stain.  What say you? To stain or not to stain?

Not pictured are the 10 Pulp Miniatures US Marines in tropical gear I just finished an hour ago.  Then I started up 3 25mm ATG crews and guns for my 1940 French army. French Foreign Legion, of course!  That way we can use them for Pulp!  I still need to match one color to make the guns work, but that shouldn't be too tough. My PollyS "MUD" has gone AWOL.  And I seem to have lost one of my 25mm Irregular Minatures Yaks, just as I was ready to base the four of them!  Crikey!  Look at his beady little eyes!  The yaks could possibly be some of my longest ignored figs, I bought them back when Irregular had a booth at Historicon, gotta be 20+ years ago.  They're so old scale creep has left them the size of goats.  Maybe I'll use them as baby buffalo.
Posted by Chuckaroobob at 1:00 AM

It Sounds like somebody is making some painting progress. The American cav look good, we will have to include them in the next Mexican revolution game. I think the Mexican peons look good the way they are but adding a stain to them probably won't hurt them.

A little stain wouldn't hurt. If you're worried about it becoming too dark, I often thin out the water-based stain I use; I imagine that you could do the same with the AP stuff with a little, well, thinner.