Chuckaroobob came over to Case De Killgore for a refresher game of Warhammer Fantasy Battle Third edition. We are planning on playing a Third Edition game at the GameOnGw Gamesday. It has been about twenty years since I played a game of third edition so I suggested the practice game before trying to play on the games day. I plan to play Undead at the gamesday but it isn't ready, so I put together a Chaos army of beastmen and Minotaurs. 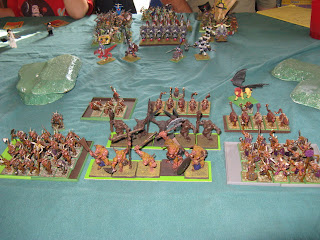 My beastman horde was lead by a lvl 25 Minotaur lord, magically inscribed heavy armor, shield and a enchantred strike, hellhoned parrying blade weighing in at 411 points. A lvl 15 Minotaur Deathsteer with a hell honed blade, two lvl 15 Beastmen feralfiends, and last a lvl 15 wizard Beastmen Feralfluxer with protective runes and a lightning bolt scroll. The troops were one unit of four Minotaurs with great weapons, one unit of Minotaurs with extra hand weapons, a unit of 19 Beastmen with hand weapon and shield, a unit of 19 beast men with extra hand weapon, two beast packs with five chaos hounds, one beast pack with three chaos hounds and last a chaotic host with a Manticore. 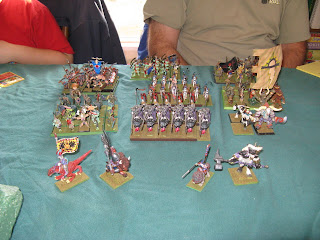 My guess at chucks list was a lvl 15 Chaos warrior on a temple dog, another chaos warrior hero on a chaos steed lizard with the battle standard, a chaos thug on foot and two Minotaur heros. His troops were two units of chaos thug horsemen, five units of beastmen infantry and one unit of four minotaurs. 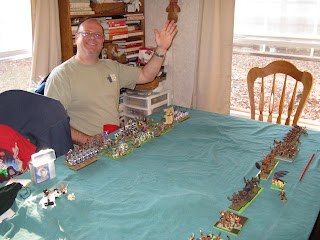 The armies form up on the wind swept chaos wastes, ready to prove to the gods who are the greater warriors. 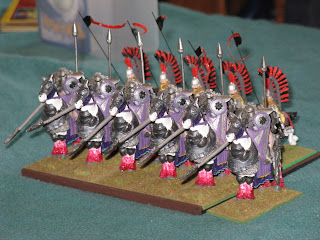 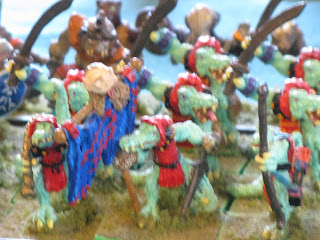 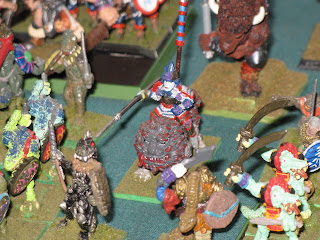 In the center the Chaos Samurai drives the horde into battle. 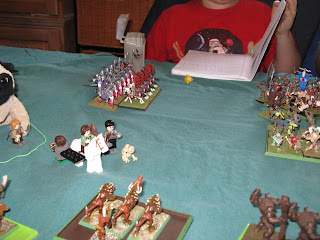 The Thug horsemen try some fancy maneuvering and fall their roll, leaving their flank exposed to the beast pack. 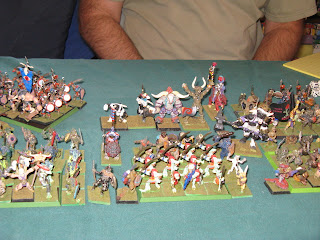 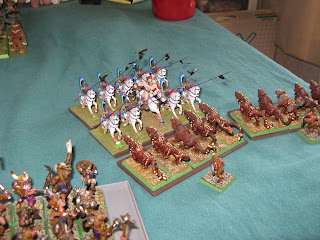 After taking an ineffective lightning bolt from my FeralFluxer's scroll, the thug lancers charge into the beast pack. The lancers do three wounds and in a bout of edition relapse I remove three chaos hounds and they rout, then I notice that chaos hounds have two wounds so only one was killed, so no rout test the hounds stay in the fight. 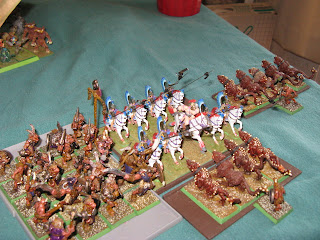 My Turn, the beastmen with shields lead by the feralfluxer charge the lancer flank. 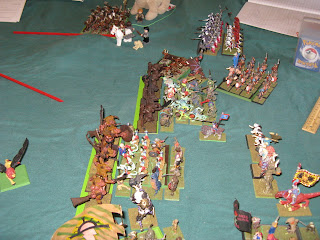 The Minotaur lord and Deathsteer lead both units of Minotaurs into combat. 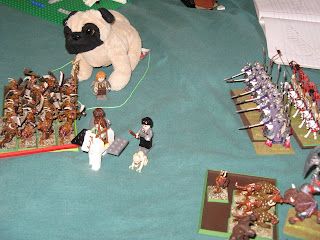 On the left flank the Hobbit and Hogwarts detachment advance down the middle. Harry potter has cast a zone of sanctuary(the green string) around Pugsey the Dogzilla and Samwise while Harry, Gollum and Frodo on a Pegasus with a bow move past the unit of beastmen. 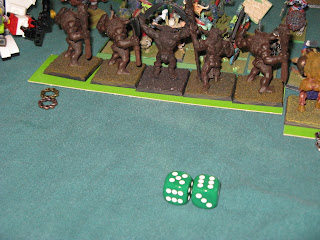 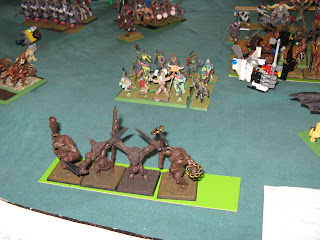 The Minotaurs take several more wounds from the free hack when they rout but out run the thugs. 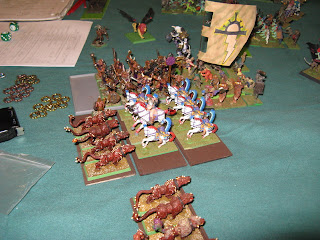 Chuckaroo's turn, his beastmen and a Minotaur charge into my beastmen with shields flank. 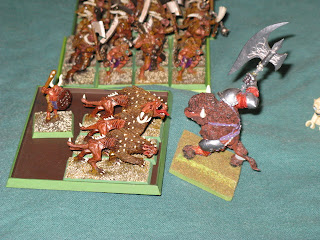 Chuck's Minotaur hero charges at the beat pack and comes up a quarter inch short. This would end up being one of the most decisive moments in the game. 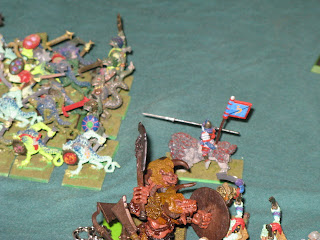 Chuck moves up the Chaos Samurai to get the charge on my Minotaur lord next turn. 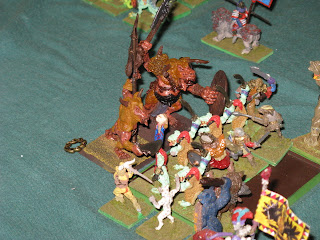 The Minotaur lord cuts through the beast men as they kill off the rest of the Minotaur unit. 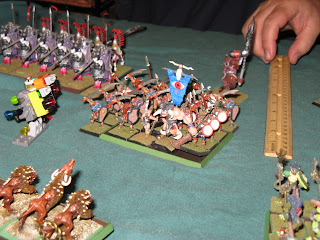 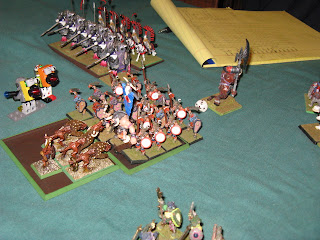 The minotaur runs through a unit of beastmen but they hold, so the beast pack pursues into them while the Minotaur runs for the worlds edge. 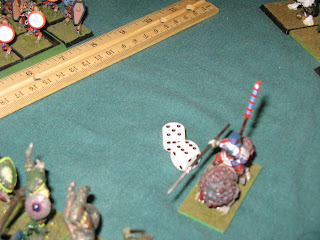 The Minotaur is too close to the Chaos Samurai on Temple dog, he bolos the panic test and routs. 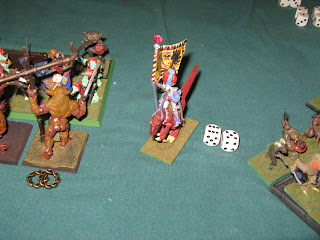 The unit fighting the Minotaurs passes the panic test but the Battle standard bearer fails his panic test, 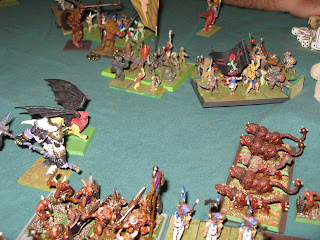 This causes the unit next to the battle standard to test and they fail, then the unit fighting my beastmen, lead by the FeralFluxer, has to test for panic and they fail. Letting my beasts get a free hack. The Manticore gets it first attacks in. earlier when I had charged the Manticore into combat Chuck minotaur hero use his chaos attribute to hypnotize the manticore so it couldn't strike blows. Now that the combat is over its binding is released so it flys away. 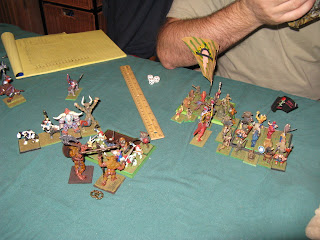 The majority of Chuckaroo's army has panicked toward the world's edge but his minotaurs line up to charge my Minotaur lord. 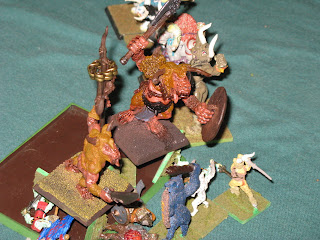 The Minotaur lord finishes off the unit of beastmen and we call the game. 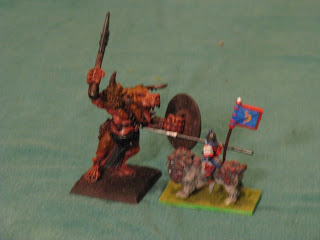 A bit of junk talking ensued and Chuckaroo insisted that if his Chaos Samurai on Temple dog would have gotten into combat it would have been a different game. So we set up the Generals in a duel with the Chaos Samurai charging. The Samurai swings and the Temple Dog gets it strength ten hits and my Minotaur lord survives. This is a when I am accused of being a blackguard because my ringer lord was more ringy than Chuckaroo's ringer lord.

I learned a few lessons from the game ,extra hand weapons, bad, if you are going for magic and binding hosts bring more wizards and tooled up ringer lords, good.

I expect that the Deathsteer should be careful of its exhaust port.

It was a different time back in the eighties when they expected to have fun when you played fantasy battle.

Well thank heavens those days are long gone! Who needs fun in a game?

The more things change, the more they stay the same. No matter the edition, the army choice "Superdude with a cheering section" always trumps "army made of troops." Why do you guys bring all those cheerleaders when you know your one superdude is 98% of your combat power? Nothing in my entire army, even all my heroes combined, could not have killed that level 25 superdude. In the immortal words of Commander Spock, "Sadness. Sadness."

I still think your Champion would had a chance all you needed to do was roll average, well on second thought probably not.