After seeing some updates on a buddy of mine's Nurgle Chaos Space marines I pulled some of mine out to work on them some more.  The Death Guard are one of my favorite Apocalypse armies. I fielded a little over 10,000 point at the 2009 Apocalypse game in Morrisville but the last time they saw the table in an Apocalypse game was the 22Jan11 World Wide Apocalypse game. I collected up way over a hundred Plague Marines over the years and have the vast majority of them painted to a decent three color standard. My goal is to paint all of them to a better than table top level. The Apocalypse gaming club I like playing with has a three color paint minimum and have huge armies of painted figures on the table really add to the experience. I is going to take a while but I am in it for the long term. 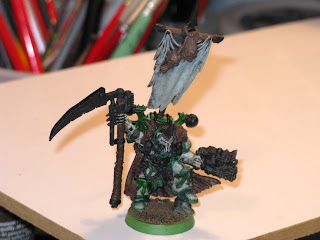 currently is a Death Guard Nurgle Chaos Lord conversion I picked up in a trade years ago. I wanted to have him finished by the 2011 Big Game but he ended up setting the game out. 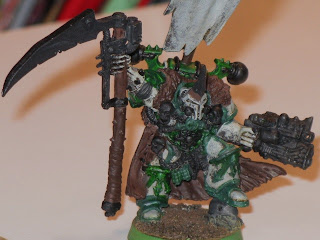 A little closer look. He is only base coated at the moment and needs a lot more work to finish. He was already converted when I received him and the only change I have made is to swap the plasma pistol he had for a Combi plasma. The original model was a chaos space marine lord, with a convert typhus scythe and a Typhus head. 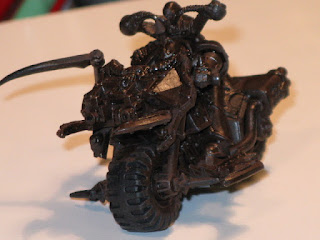 I have a bunch of Chaos Space marine bikers and I want to add a big unit of Nurgle Death guard bikers to my Apocalypse army. To lead them I converted a Nurlge Death Guard Chaos Lord on a bike. It is still just base coated but is in the queue. The scythe is from the zombie sprue, the chaos bike bits are from the original chaos bikers, with a plague marine head, back pack and shoulder pads. 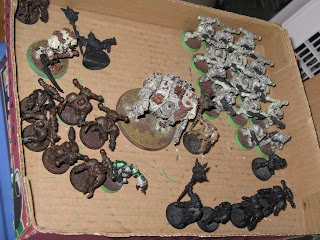 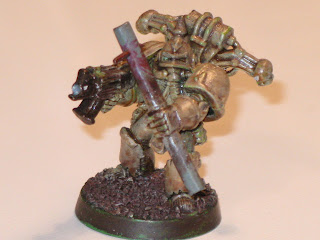 Last Is my favorite Death Guard Plague Marine. i originally wanted to have a Plague Marine be armed with the Daemonic super weapon a"Board with a Nail in IT!". After a little thought no matter how tough a board you use it is going to get bounce off of a space marine. Then inspiration struck and I came up with the new and improved Daemonic super weapon a "Lead Pipe With a Nail in IT!". A space marine might ignore a board but a hundred pound lead pipe with a hardened steel spike is another matter. Some styrene tube and a nail and the conversion was complete. He was originally green like the majority of my Death Gard but as I paint them I am going with an off white color closer the the original Death Guard Legion colors.

Board with a nail in it reminds me of that episode of the Simpsons where they wish for world peace then the aliens conquer the planet, then Moe gets a board with a nail in it and chases away the aliens. The aliens in their wisdom go on to describe how humanity will make bigger and bigger boards with nails in them until they make one so large that it will destroy humanity. Well that's enough rambling, your plague dudes are looking good. Keep it up and you'll have a force that will rival Mortarion's own.

That would be the "One True" Episode of the Simpsons and yes that is where it originated.