In my quest to add to my fleet of oop old style Chaos Rhinos I managed to pick up another one. I dropped it into the simple green to strip the paint. Well a couple months later I opened up the simple green container to drop in some figure I picked up recently and remembered where I had left the chaos rhino. 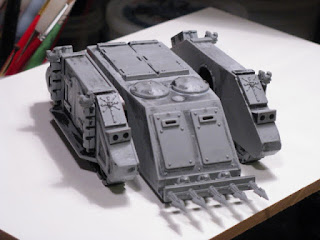 The sides had been super glued on and soaking so long had loosened the bond, so they came off the hull. Other than that the paint came off in sheets. I took a brush and hot water to it and almost all of the paint came off.  I still ended up scraping a little paint and sanding down some rough spots but overall it was in real good shape. 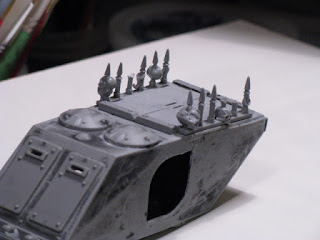 First things first what is a chaos rhino with out spike racks to display your trophies. I raided my stocks of chaos spikey bits and after trimming a couple down mounted them on the back. 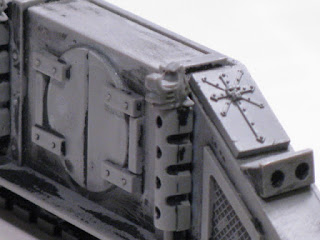 The previous owner had already some chaos heads to the tops of the smoke stack but I wanted it to match my other chaos rhinos. 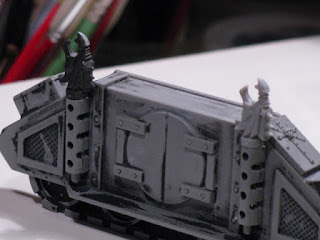 So I broke off the old ones  and after drilling out the mouths added the larger ones to match some of my other Chaos Rhinos. 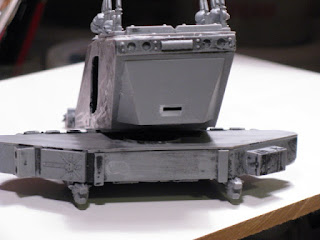 The Chaos Rhino originally had the metal rear door from the old style vindicator. I removed the door and added a regular rhino ramp to the rear. 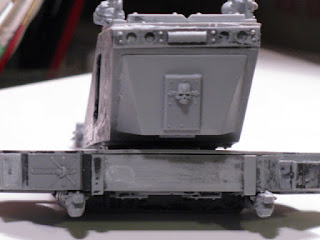 To cover the hole and add some more chaosy goodness I glued another chaos plate to the rear ramp. 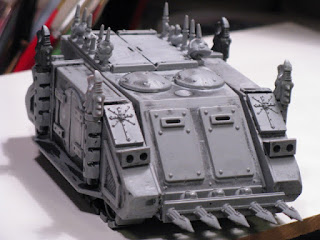 After cleaning off the super glue residue I glued the the sides back on. The one headlight is a bit crooked and I am still debating about leaving it or breaking it off and making it more even with the other one. I plan to add some smoke launcher and I am still debating how to arm it.  I have two Chaos rhinos with a single combi-bolter, two with twin combi-bolters and two with a combi-bolter and a combi-melta. I may just go with a single combi-bolter and add a removable havoc launcher but I need to see the new Chaos space marine codex to see if that is a legal option anymore. I will make the decision and get another post up soon.

For what ever reason I love the old Rhino. It's so dinky and yet is so cool.

I dig the old rhinos too, but more out of nostalgia. What I am waiting for is when I take them to a tournament and the rules lawyers say I am using smaller Rhinos to gain an advantage.