I have been building up my Lizardman army as an opponent for Victorian Science Fiction and Pulp Wargaming. They have taken the field many times to defend their planet against Chuckaroobob's French Foreign Legion's incursions. One of the latest is Here 4 June action at Lizardman Village. One thing missing from my collection was some feared Parrotmen of Venus. Armed with rifles and a hatred of humans I managed to recruit some to the Lizardman cause. 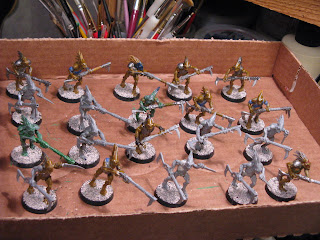 We used the Parrotmen from Chuckaroo's collection before and now they will have more reinforcements. I worked out a trade with Chris from Sippin' on Paintwater, in a minotaurs for kroot deal. Some of them had seen much better days but after a little work and greenstuff they are ready for a prime coat. 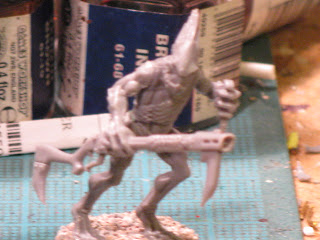 A close up of the war chief. I might add a few more bits to mark him out a little better.