Hi Kids,  This is the other game the Catawba Gamers played on PTO Wednesday, when sneaky employees mysteriously disappeared from work and reappeared minutes later at a gaming store, Parker, Banner Kent & Wayne in Cornelius, NC.  When its tactical level World War Two, its got to be Disposable Heroes.  Any other ruleset is a gesture.  We didn't have a huge block of time, so we played a 600 pt defender (German Grenadiers) vs. 800 pts of attackers (US Army). 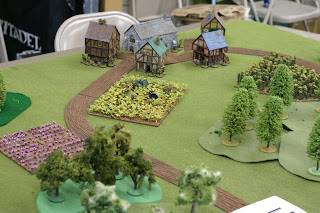 Here we have the peaceful village of Tinyvillette, infested with Huns!  They've even occupied the church!  Are they seeking redemption?  Nope, just thick walls! 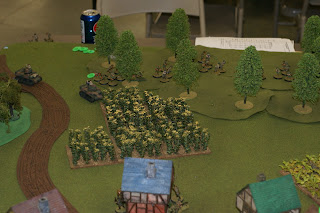 The view of the other side; US Army troops sneak through the trees, with two M5 Stuart tanks in support. 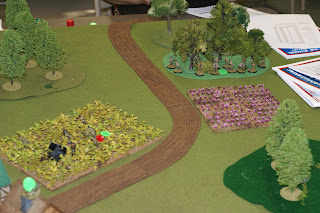 Further north, the last few Americans face a 3.7cm flak gun and a squad of infantry in a walled field.  Yeah, I know, I couldn't find the walls in the Basement of Heaped Miniatures.  The Basement can be a fickle beast. 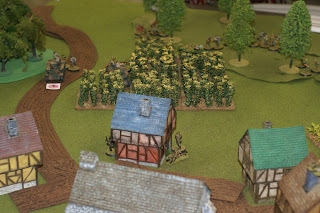 A few turns later, US Forces creep closer.  Both sides are taking casualties, although the Huns are taking considerably more.  The two Stuarts tanks approach the south edge of town and blow the living crud out of everything in sight, 12 MG dice per tank!!!  Whoa Nellie!  The Huns respond with numerous Panzerfaust shots, but can't buy a hit!  Things are looking grim for the defense.  The Hun sniper shoots a tank commander, so that tank looses the use of the pintle mounted MG.  He also kills the American Lt, upsetting the mortar crew who had been using him as a spotter. 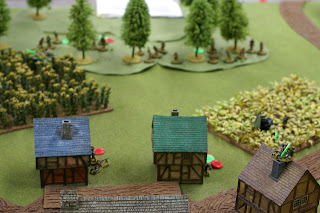 The wall of firepower creeps closer, wiping out the Huns in the field, only the town dwellers are left, and not many of them. 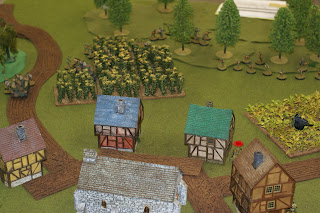 At the end of the game only two or three Huns are left alive, everyone else has been gunned down, mortared, or riddled with tank MG fire! One of the few survivors is lurking next to the green roofed building with double pin markers. 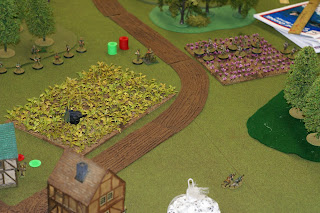 The other survivors are the two man sniper team, who decided to escape off the edge of the world at the last minute.  Well, if you've read this far perhaps you're wondering who made all this stuff.  The tanks and flak gun are Westwind, most of the figs are 25mm Westwind and Battlefront (no, the OTHER Battlefront from 19th Century Miniatures), the assorted crops are from Flag Dude, the roads are from that outfit in Roanoke VA, Battlefield Terrain Concepts I think.  The buildings were purchased second hand from a crackhead in Statesville.  Or so it seemed at the time.  Most of the miniature troops were painted by Dutch Pond painting service.
Posted by Chuckaroobob at 8:30 AM

It looks like a fun game but Where was the Tiger Tank? According to Flames of War there was a Tiger on every corner during the war, Right!

In chuck s world the Tiger did not exist at all. His chech half is still bitter.

In chuck s world the Tiger did not exist at all. His chech half is still bitter.

I just find it amusing that the Huns only built about 1400 Tigers during the war, yet my Hun opponents have used about 50,000+ over the years. Including the Tiger 1 in mid-war was the worst mistake ever. And then again some Tigerboys cry over the JS-2, a much inferior vehicle. Go figure.