Armorcast Superheavies from the era before Forge World

Hi Kids, So I had intended to paint today, but I've been dropping things all day.  As I went down the basement stairs I tripped and fell down, knocking over a pile of stuff in the process.  And as soon as I went to my painting table I knocked 5 boxes off the shelves.  So I decided to call it a wasted effort and gave up on painting before I knocked out some teeth with a 3 O brush....

Instead I decided to look around for the Armorcast Superheavy Cannon I bought many moons ago.  Naturally enough, it remains undiscovered.  But I did find one other object of interest: an Armorcast Shadowsword!  It was one the bottom of a pile of 4 armorcast boxes, the top three being empty.  But I kept digging and uncovered this beast still in the box. 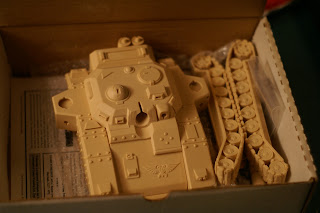 Ah, smell the resin!  Of course, you can try to nullify that smell by using a blow dryer on it. Or some heavy primer. 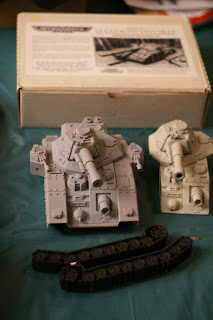 Nearby in the closet were another few items, not sure where the exterior hull of the right Baneblade might be, it might be part of a Shadowsword/Baneblade combo set.  Then again, its probably banging around the basement someplace.  Yeah, that the Shadowsword in the box in the back.  Everybody has been crying about GW prices again, I'd like to take this opportunity to point out that one superheavy from Armorcast was a whopping $50 when they were in production.  I still prefer these since they only have about a dozen parts.  I want to play with the damn things, not spend half my life building them.  Of course, that's just me.  And no, don't ask me about the last time I played GW. 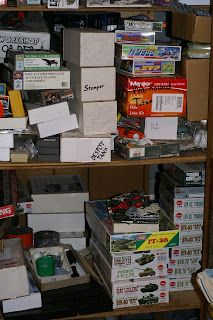 These are the two shelves I was searching.  I also found a Tyranid superheavy bug I had forgotten about.  It started with an "H" and had big claw arms.  Then again, what tyranid doesn't have big claw arms?  Yeah, that's another Warhound in the red box, a Stomper, and a 25mm Despot Tank from Reaper's CAV (made by John Bear Ross IIRC).  Yes, the magic marker has definitely made my life easier.  There's a 25mm Bauhaus Grizzly in there someplace, too.  Just to be different, there are a bunch of The Assault Group 25mm moderns and some Copplestone figs in the smaller boxes.  It's not all GW after all!
Posted by Chuckaroobob at 8:00 AM

Must've been fate to have stumbled around and found that model. Looks like you certainly have a treasure trove inn your basement. Best, Dea

The Tyranid could possibly be a Haruspex. We need to get some Apocalyptic gaming going.

Jerry said the same thing regarding an Apocalypse game. So why don't you lads schedule something? You know how gamers come out of the woodwork when you mention Apocalypse! You could have it at PBK&W or Gaming Underground. Maybe the GameonGW crowd would get jumpstarted.
Do It!
Just Do It!