Hi Kids,  Over the holidays we managed to get some gaming in, and the game o' choice was the new Massively Expensive Designer's Edition of OGRE!  I still find it amusing that a game that was released 30 years ago for US$2.95 has swelled to US$100, a 3390% increase.  Wish my stocks had that kind of performance.  Oh well.  On to the game!  We decided to play one of the bigger GEV scenarios, I had 35 armor attacking and Ol had a Mk 3 Ogre and some armor and infantry, with reinforcements arriving every turn.  Sorry about the crappy pictures, they are from my cellphone.  We decided to use the optional "Original" black & white counters, since they are so cool.  They can be yours for an additional US$25.00.  We used two sets for this game. 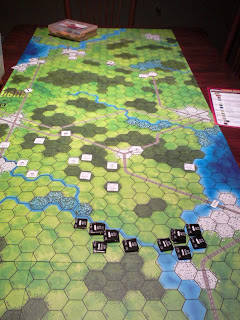 Here's the initial advance, my GEV's are stacked pretty deep, as no defending troops can reach them. 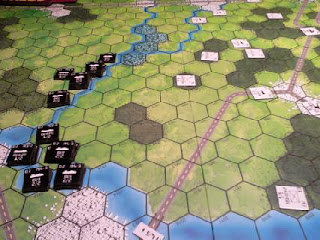 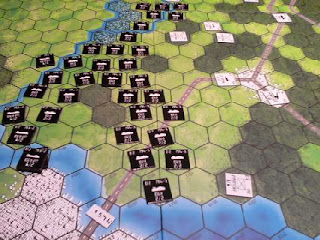 The swarm advances to contact, and starts lighting up everything within 2 hexes....
The Howitzer on defense doesn't last long. 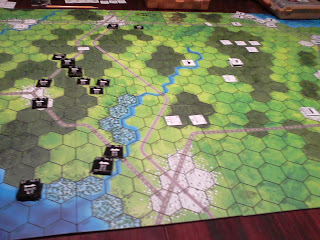 The GEV's trying to find an open way through all the dangerous terrain. 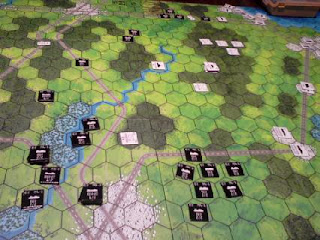 Bypassing defenses, (especially the Mk3 Ogre in the center!) the GEV's spread out all over the map. 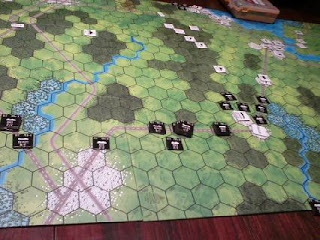 More of the same, GEV's rushing all over the map, blasting the crud outta everything! Except for that 20 Point building defended by x3 defense infantry!!! 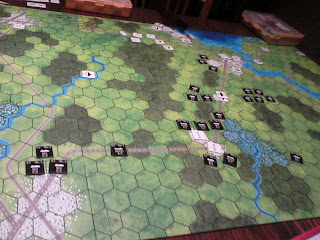 Losses mount as the defender's reinforcements reach the battle area, and attrition gets ugly.﻿ 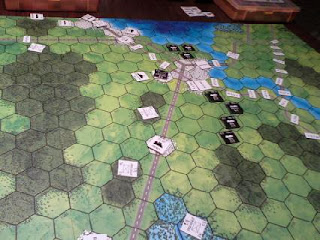 Holy cow, what's happened to the 35 GEV's?  One defender Lt Tank managed to crush everything in sight, racking up kills like nobody's business, while bouncing huge amounts of tacnukes off his thin armor.  He better stay outta Vegas! 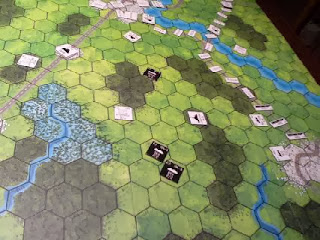 And the end is near, I'm down to about 3 GEV's!  At this point we added up all the points for destroyed terrain and combats units, and it looks like a decisive victory for the raiders!!

Posted by Chuckaroobob at 8:00 AM

Congrats! on the Win.

I had the original game. Tempted by the new one.