Second Chance Skeletons or one more step toward 10,000 points

In my quest to build a legal ten thousand point Vampire Count army I recently picked up a lot of old style skeletons from Evil bay, cheap. The real challenge for fielding the army is building up 2500 points of core troops. I have a good start on the force but even with this lot and the skeletons in the bits box. I did the numbers and without using any proxies I will need about 150 zombies, or 75 or so skeletons or 40 ghouls plus 25 skeletons. The skeletons are easier to paint so I will be going with them. That isn't the best army strategy but I am a realist and even if I did manage to come up with 150 zombies it will take me too long to paint them. 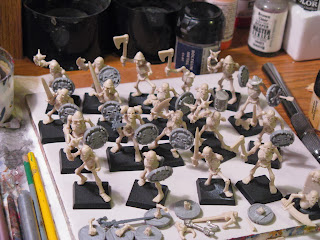 The lot was in bad shape before it was shipped and took a couple more casualties in transit but nothing that I couldn't fix or replace. 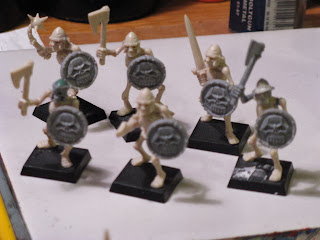 The first group finished. I pulled all the armored torso skeletons to rebuild and add to the my unit of armored skeletons. The major fix on most was removing the old shield boss and adding the same skull boss as the armored skeleton unit. The model on the far right received a new axe arm from the bits box and had is shield arm repositioned so it would rank up better. 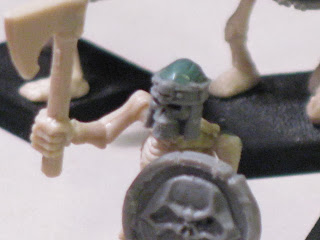 I only had five armored torsos but needed six models to have thirty in the unit of armored skeletons. I lacked any armored heads so I took a surplus tomb king skeleton head and trimmed down the streamers on the side so they were similar to the face guard plates of the other helmet heads. Then I trimmed down the crest of the head band and added a green stuff dome to make it more like the other helmets.