Thw Warhammer 40k League has finally finished. We started with 12 players and had half the field drop by the end. The upside is even though I was last in the league I made it into the top six tournament by default. The way the tournament worked was that the 3,4,5,6th ranked players split and played each other. The winners of those two games played number one and two, followed by those winners playing for the championship. I drew Mike W and his Eldar for my game. I played him twice earlier in the league but only have the one battle report from our second game. 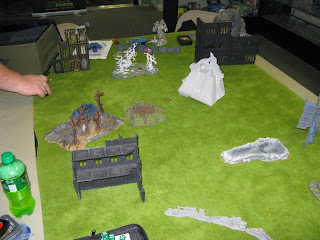 The terrain was set out for the game by the League organizer. The scenario was a combination Relic and Eternal War. We set up on the short table edges and this is when I lost the game. 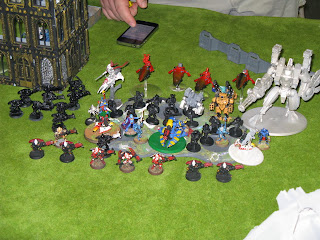 Mike W's  TauDar. Two big warp spider squads, support weapon squad, firewarrior squad, Ethereal, a couple farseers, Autarch on jetbike in a jetbike squad, Riptide suit, two broadsides with missile pods, a dark reaper squad in a wave serpent and a dire avenger squad in a wave serpent, with everything that could get a skyfire or interceptor upgraded. 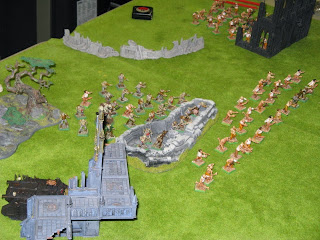 I wasn't going to play in the tournament but the sixth player dropped and I was in. I  contemplated a big Imperial Guard allied detachment but wasn't able to finish building the models I wanted to use so I went with a "More Than They Can shoot down" Plague Zombie Horde List. I took Huron Blackheart as my warlord, Typhus, 82 plague zombies in three squads, a noise marine squad in a rhino,two nurgle obliterators, five chaos terminators with a Land raider dedicated transport and two Heldrakes. Their was no way I was going to get the Relic slow walking a mob of plague zombies into the teeth of the TauDar gun line. I rolled for Huron's master of deception warlord trait and only made one unit infiltrate. So I chose to outflank the Terminators and their land raider. 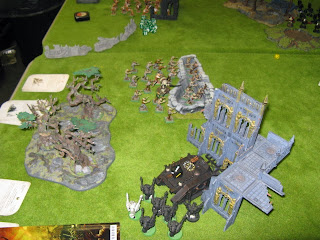 After the Taudar shooting turn one, 27 plague zombies killed and a rhino destroyed. 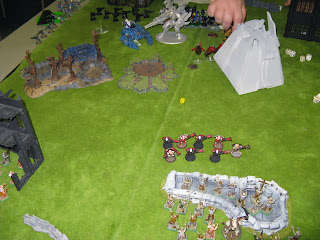 Then the Warp spiders jump up a little closer. 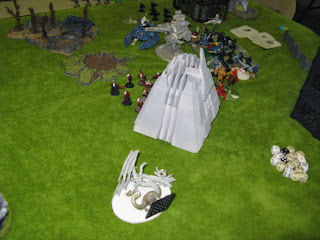 My turn two a Heldrake and the obliterators arrive. The Heldrake is immediatley skyfired and intercepted down. 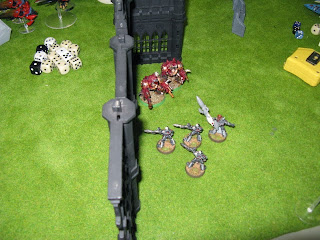 The obliterators destroy a wave serpent and pin the dark reapers inside. 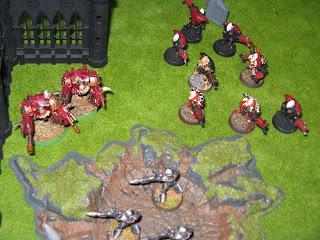 The Warpspiders from the other end of the table show up in the backfield on his turn three. 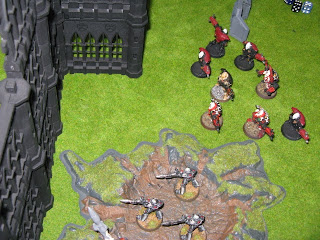 The Obliterators had a good run but are gunned down. 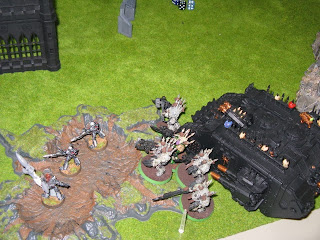 My turn three the landraider and other Heldrake arrive. That Heldrake took the Skyfire on the nose but survived. The Terminators on the other hand deployed and shot down some dark reapers. The Landraider also scored by killing the two broadside battle suits. 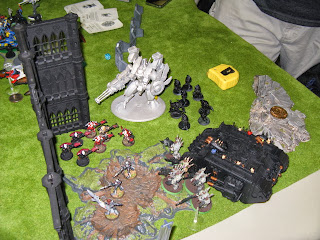 Taudar turn four the army redeploys to take on the terminators. 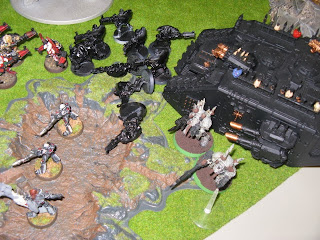 The terminators survive one squad of warpspiders, 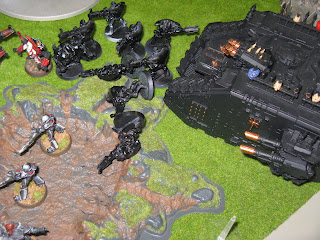 But not the second squad and dark reapers. 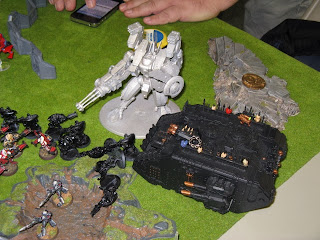 The riptide charges in and wiffs the attack. 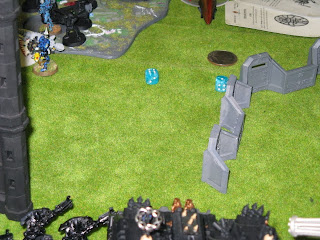 The relic left in the open after the Heldrake burned down the jetbike squad. Only one choice to make. 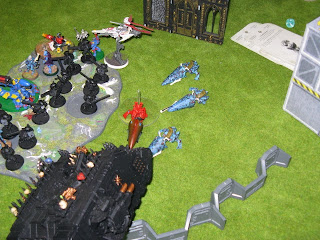 TANK SHOCK! the land raider can't carry the relic but it can park on it. 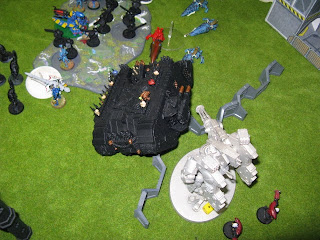 The Riptide and warpspiders move up. 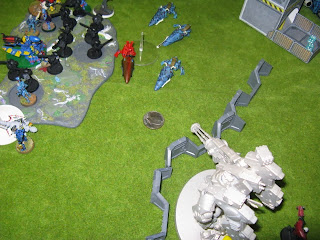 But the land raider is destroyed by a thrown Singing spear. We roll and the game ends at turn five.
It was almost a lost cause from the start but I had fun playing. I can see how the TauDar lists are all the rage in tournaments. As a side note after the game was finished and we were talking about it while we waited for the next round to start. It was pointed out that a Singing Spear only has armorbane in melee, so it wouldn't have been able to destroy a land raider if thrown. The down side of neither you nor your opponent knowing their wargear rules.

So my final standing for a possible 17 games was 4 wins, 2 draws and 11 loses. All four wins were from my opponents forfeiting games. I joined the league to play games so I succeeded in that. I played some really good games and I am starting to get a better feel for the Chaos Space Marine codex. The two Taudar lists in the final six ended up splitting the top prize rather than fight the last game against each other.

They are talking about another league starting next January. I might play but probably with a different army.
Posted by ColKillgore at 9:30 AM

The two Taudar players wimped out at the end? Whatta buncha punks......

That is one way to say it.

Whereupon they enter upon a mutually beneficial negotiated settlement!

Doesn't have quite the same ring to it.

You are right not nearly as catchy.