I have finally started working on  the Bolt Action 28mm Soviet models Chuckaroobob picked up fro me a while back. 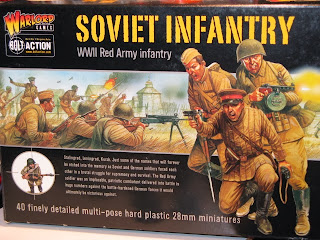 The box came with forty miniatures but I was able to pick up some more sprues from Warlord Games during a half price sprue sale. 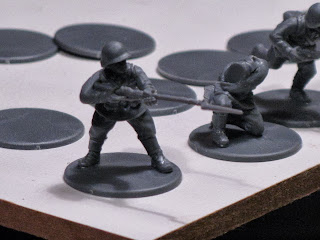 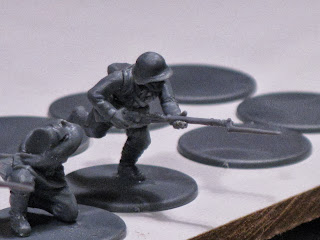 I am building the armies using the Disposeable Heroes supplement Urraugh! After pointing out early war list and  late war Infantry platoon lists I will need 59 models to be able to field them. After some trading with chuckaroo I have enough models for the Infantry. I still want to pick up a couple of the maxim hmgs and crew to add to the army. As a short term fix I will use a Chinese maxim until I acquire the Soviet ones.

It is much better than the 250+ 15mm Soviet infantry I painted for my Flames of War army. Sadly that army still isn't complete. I still have to paint up 100 or so more to field a full infantry Early war army.