I have been collecting up a Skaven army for Warhammer Fantasy battle for a long time. The army stared with the ten skaven model I picked up in the Fantasy Regiment box set so many moons ago. I finally have enough that I can field a decent sized army I just have to build them. The army has models from just about every generation of the Skaven including this Oop Warp lightning cannon. 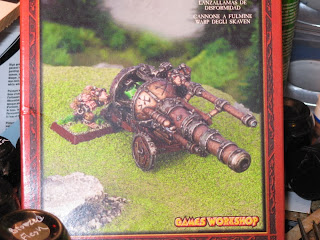 I have had this model for quite awhile but I recently picked up one of the new plastic Warp lightning cannons with the whipping boy prize money from the 40k league. The new style cannon is elevated on a chassis so it can fire over the units in front of  it. I could use the old style cannon as is but I want to have that built in elevation like the newer models. 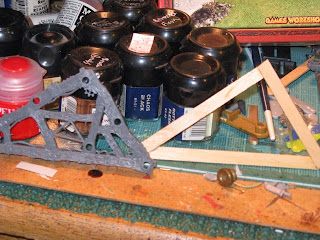 So using the plastic frame from the new Warp Lightning cannon as a template, I started building a wooden frame. 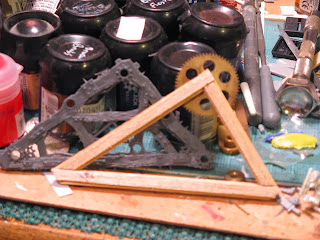 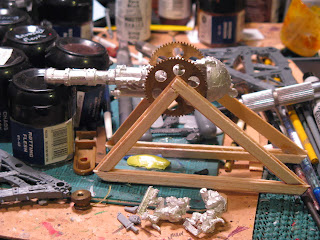 I drilled a hole in the center of the gear and used brass pins to mount the oop warp lighting cannon. 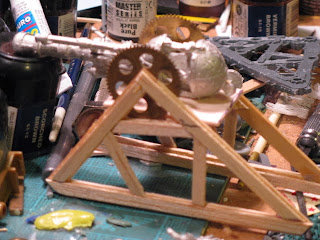 More bracing added and reinforced. I cut a platform and plan to mount the engineer on it next to the gun. 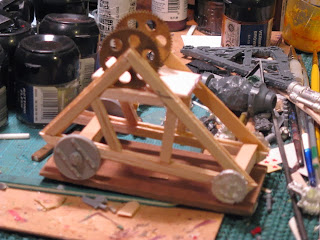 I added some cross beams and reinforced them to use as the mounting points for the wheels. The front two are some extra plastic wheels and the back two are from the original warp lightning kit. 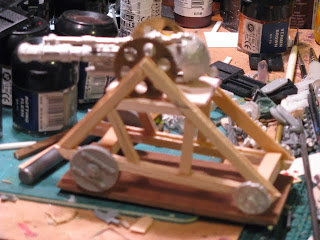 The whole model with the gun in place. I need a bit more detailing but I think it is going to work. I an planning to add the two skaven slave crewmen to the inside of the chassis pushing the whole contraption. 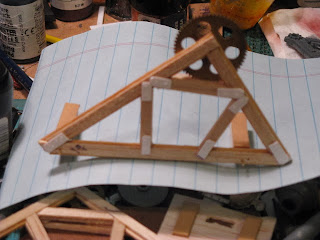 Last is the beginning of the detailing. I took .5mm styrene sheet and cut irregular strips. I used the tip of a file to punch the rivets in the strips and then glued them on.

I have a good bit of work to go. It is going to be on  the same sized base and a similar size and height as the plastic warp lightning cannon so if somebody has a problem with the conversion them I probably don't need to be playing them any way.

Looks brilliant - well done and remember to post pictures once finished!
All the best,
Kasper

Looking forwards to seeing how this progresses. :)

Thanks, I have had to reenforce the top platform and widen it a bit so the warp engineer will fit on the top and added the two skaven slaves inside the bottom to push the cannon around. I will get some more pictures up soon.