Hi Kids,  The first game went so quickly we decided to try another scenario that very same day...
We picked out another, this one called "Devil's Hill."  Somewhere in Holland, 1944, US Army troops were attacking a hill with three entrenchments defended by German infantry.  I couldn't find my shellholes or foxholes, so we just used some walls to represent the entrenchments on the top of Hill 621.  The walls on the flat part of the map represent gullies.  I set up a few squads over on the left to suppress the Huns while the main effort went up a side hill and took the entrenchments from the flank. 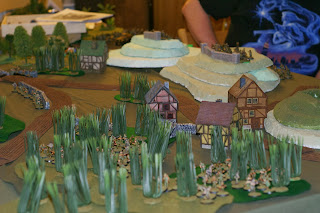 Here we have the set up, buckets of US Army men waiting for the balloon to go up.  The Huns look a little thin but have quite a few squads coming in as reinforcements on turns 3 and 4. 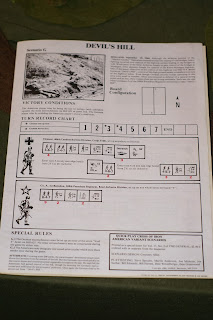 Yeah, this scenario has that same problem as the prior one:  Too Damn Many Hun Machine Guns!  These ones are even worse: MG42's in the heavy mode, complete with tripods. 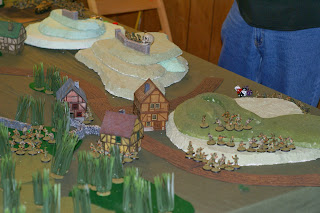 After a turn or two of devastating German shooting, I decided to concentrate on gunning down as many Huns as possible.  I had to thin out those squads with the HMG's!  Since the HMG's were considered members of the squad I had to kill 10 guys before they would stop firing.  Even three squad members would have 10 dice!!!!  Eye-yi-yi.... 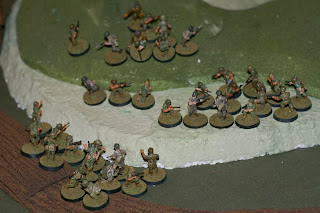 The flank attack starts up the first hill. 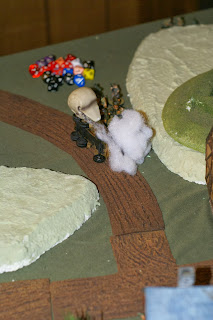 The first Hun reinforcements arrive, a couple squads and a 251 halftrack. After missing it the first time, on the next turn the bazooka gunner hits it and takes it out! None of the 10 passengers are hurt, though.  Will wonders never cease?  Skull tokens start littering the battlefield. 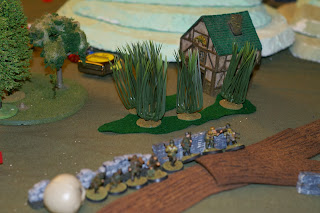 Apparently there are just too many Huns in this scenario.  The had an extra squad come down off the hill and take out some of the US infantry in the gullies. 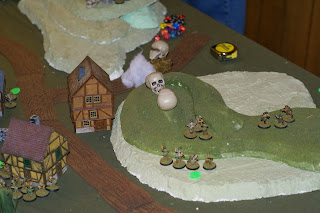 Meanwhile, the reinforcements have charged into hand to hand combat, which is pretty damn brutal!  Although all the Huns are killed, there are very few Americans left alive to continue the attack. 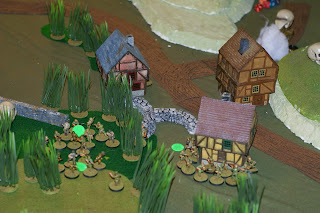 At the end of the game there are not enough Americans to press the attack, as more Hun reinforcements reach the hilltop and replace their losses. 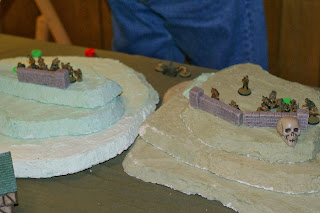 Yeah, they might look pretty thin up there, but there are about 25 dice of shooting in these few half strength squads!  And they are in -3 cover to boot!
Another Hun victory!  Arg!﻿
Posted by Chuckaroobob at 8:00 AM