Hi Kids,  Got another game in using my WW2 Americans and Germans this week.  Rather than just take X point value vs. other guy's X point value troops we decided to use a Squad Leader scenario to set up the game.  The mapboards are not an exact match and I have some doubts about whether the game is balanced, but what the hell, its all fun. Here we have the map, somewhere in Sicily in 1943.  The US are defending, the Germans have to enter from the east or west edges of the far side and take two out of three victory condition buildings.  The three buildings are the three story one, the grey cutout on the far right, and the brown one with the blue-grey chimney.  The US troops are Paratroopers (also known as the Good Guys), and Huns are Herman Goering Division (also known as the Bad Guys).﻿ 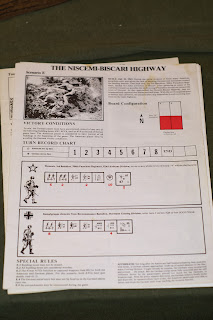 The Niscemi-Biscari Highway, Scenario E out of the General magazine oh so many moons ago.  So many moons that this is still Squad Leader; Advanced Squad Leader has not yet been published. I didn't feel like reading the minefield rules, so just ignored them.  Could have been a mistake.... First blood!  The Huns advance onto the table next to an American squad and exchange fire on turn one.  Figs are Westwind, Black Tree Designs, Battlefront (the OTHER Battlefront!) and even some Artizan floating around somewhere.  Since the buildings are not hollow we just put the guys around the edges to signify that they are inside. Holy Cow!  Maybe Huns is a more apt description than I realized as the entire Horde sweeps down on the luckless Americans! That Sdkfz 261 is from Company B.  The three axle is just so much sexier than the 8 rad!  C'mon, you know its true! 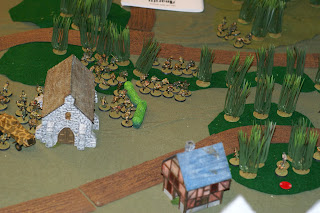 After crushing the lads in the church, the Hun Horde continues to sweep forward. The lads are the far side of the road don't last long, check the next picture. 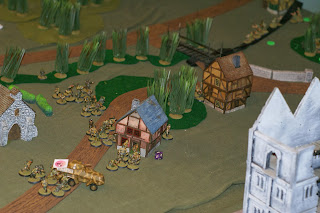 That black strap is supposed to represent a gully.  My terrain still leaves much to be desired.  The Huns appear unstoppable as they maneuver across the map, right up to the front door of the first victory condition house.  It doesn't go all their way though, as a full squad gets killed on the other side of the gully by the US defenders.  And you can see in this shot some of the other Hun squads are taking heavy losses. The Armored Car leads the charge towards the second victory condition house. Lots of half strength Huns in the middle of the table. More "Skull Tokens" are placed where squads are wiped out.  In Disposable Heroes when a side loses a squad their Guts goes down by one.  Skull tokens are a fun way of keeping track.  We've never actually put them on the table before, but what the heck.  US defenders are taking a lot of hits, too, and are nearly out of troops. 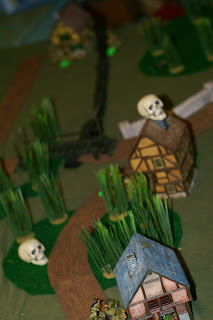 The long view, a few US troops still are hanging out down in the gully. 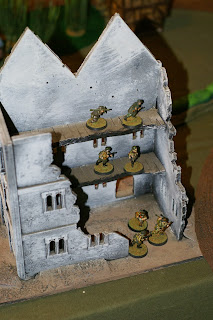 The dreaded Huns capture the second building after wiping out two US squads! 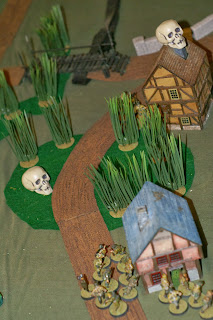 At the end of the game, the US has lost two buildings and don't have enough troops to mount a counterattack.  Victory to the Huns!  Bummer!
So some of the stuff of which I am still uncertain:  SL has individual leaders, DS has command squads containing the leaders.  Single leaders running around the map exercise a lot more control over the game. SL has rules like a squad loses it's inherent firepower if they shoot a support weapon with more than 4 firepower.  In DS we just added the support weapons to the squad, giving some Hun squads about 16 dice!  Yowza!! The US squads are not much different, as 12 guys have about 14 dice.  But the Paratroopers do not have as many MG's.  Might have to try some modifications...﻿
Posted by Chuckaroobob at 9:00 AM

I didn't see anything about sticky socks, were is the realism?