I finally won an auction on Ebay for a Gametech LZ-5 and LZ-41 zeppelins. They are for the Sky Galleons of Mars aerial ship combat game. I wasn't able to get any of the ships from Gametech when they were in production. That has now changed. I scratch built several martian sky galleons but wasn't sure exactly what size the Zeppelins were, so I bit the bullet and paid the price to get one of each. 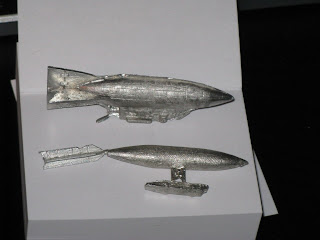 I now have them in my hands and they have produced plans for a squadron of Zeppelins to rule the Martian skies. I am debating building maybe a half dozen or so from 1/48 scale model airplane drop tanks. I have been building up my fleet of air ships and sky galleons so I can start playing some big fleet battles someday. Maybe sooner rather than later.

I guess those are some lead zeppelins. He he he.

No they are The tribute band, Pewter Zeppelins.