It looks like I have jumped on another bandwagon, 15mm Sci-Fi. Chris over at Sippin' on Paint Water and Impcommander at Skies of Flies, Ground of Rust have started building armies to use with 5150:Star Army. The original plan was to use my Flames of War 15mm Soviet army as low tech troops and just see how many they could shoot before I swamped them with bodies, just like a regular Flames of War game. After a few questions, it came out the Chris' Power armored troops were virtually impervious to bullets, so I needed a new plan. So I started shopping for new 15mm Sci-Fi figures. They have some real nice figures out there but the hobby fund is about tapped out. Then it hit me, I would just use the left over 15mm Soviets I had and convert them over to Sci-Fi figures. A bonus would be, being able to double duty them for Weird World War Two gaming.


The first thing I considered is the troops need energy weapons and Anti-tank rockets. After several brainstorming sessions and debating the work involved in sculpting "Tesla" style rifle muzzles on a pile of 15mm figures, I headed to Hobby lobby looking for beads I might be able to use. My original idea was to use a small sequin and a round bead to make the rifle muzzle. Alas, Hobby lobby didn't have any sequins small enough to use. I started searching the beads for something useful for the rifle muzzle and a rocket warhead when I found the daisy spacer bead and it all clicked into place. 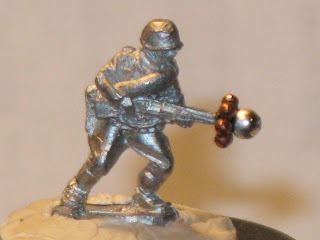 Voila! the 15mm Soviet rifleman armed with his new Tesla Particle Beam rifle. Construction was pretty straight forward, I filed down the rifle sight and the bayonet. I slid the 4.5mm Daisy spacer on till it touched the filed down rifle sight, added a drop of super glue and slid the 2.4mm round bead on to the filed down bayonet. On some of the models I had to trim the bayonet off at the bead and then either add a bit to fill the hole or file the bead down even. 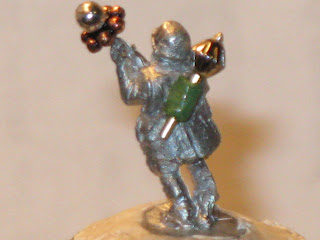 The next step was adding some rocket launchers for that extra anti armor punch. The closest thing to a diamond shaped bead small enough for my use was a 3mm corrugated bicone head bead. To make the rocket, I filed down to a point a piece of .20 Gauge brass wire. I added a drop of super glue to the wire and slid the bead onto the end until just the filed point was exposed past the bead. I then measured six millimeters behind the bead and cut the wire with some side cutters. I glued the rocket to the models back and then used a piece of green stuff to make a rocket carried on the models back. 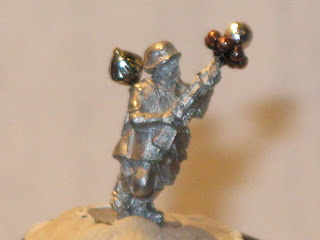 A front view of the rocket armed model. I think the corrugated texture of the rocket head will look good once I get them painted. I have also based all these figures on a half inch washers. I was planning on mounting them on pennies but according to Kadlec's Rules for Gentleman Wargamers, mounting models on small coins is very bad form. The coin is legal tender and represents the realm and any defacing of legal tender is a slight against the realm. 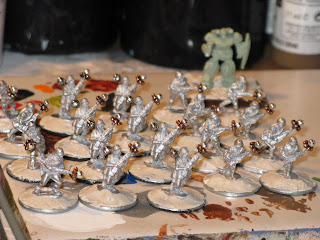 My 15mm Sci-Fi/WWWII forces as they stand now. It consists of twenty men armed with Tesla particle beam rifles and their walking tank a micro scale gundam capsule toy I found in a grocery store parking lot. Each five man squad has two anti tank rockets. I have about twenty or so more riflemen I can convert up and probably need to convert some command models too.

Thanks to the 50% off metal bead sale at Hobby lobby I picked up enough beads to make 90+ Tesla rifles and 60 rockets. For about five dollars I have more than enough parts to field a good size force instead of the fifty dollars I was wanting to spend for new models. The soviet riflemen have been sitting in my bits box for more than five years but will finally get their time on the table. I still might end up having to buy another bag of Old Glory WWII Soviet riflemen if I need to build the force larger.

I have been looking at the PSC 15mm Soviets but I will probably get a few boxes of their T34/85 tanks before I invest in some more infantry. I already have a couple hundred soviet infantry painted and based with about half that still works in progress. I think I need to get some games in with these figs before I buy enough to field another full company's worth.

That's brilliant Colonel, all becomes clear; can't wait to see them painted up.

Thanks Michael, I have been working steady and hope to have the troops fully painted and ready for the table over the weekend.

looking forward to meeting the waves of electic death with bodies and bullets!