The 40k players at Gaming Underground are starting up another 40k league and I am going to try and join in. I haven't played any games with my Death Guard Nurgle Chaos space marine in awhile so I put them back in the painting queue. I started working on some army lists. I have a bunch of model but I don't have the new hotness Helldrakes. I might pick up a couple later but right now it is going to be"Run What Ya Brung", using models on hand or from the "Closet of Doom". 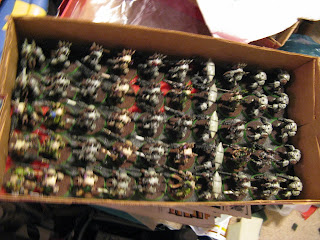 First thing I want to add to the army is some Chaos Terminators. I built up a collection of fifty for Apocalypse games and they haven't seen the table since 22Jan11 World Wide Apocalypse game. The one option missing in the group is some combi plasma guns. When I assembled the majority of the Chaos Terminators, I did it in a hurry, to get them all to a table top paint standard for a big Apocalypse game in 2009 in Morrisville. I went with WYSIWYG and rolled on. Now I want to field some with Terminators armed with Combi Plasmas. 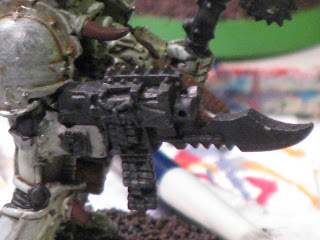 I figured a straight forward conversion would be easy enough. Chop off half the combi bolter, add plasma pistol bits and green stuff, easy, yea right. 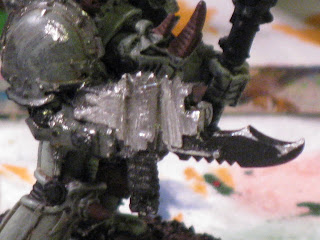 After entirely too much effort, I managed to cut off enough of the metal combi bolter to make room for the plasma bits. 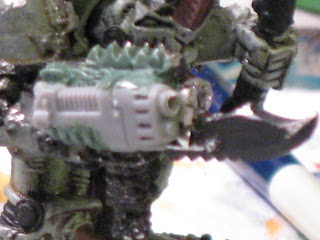 The Combi plasma conversion take one. I wasn't real happy with this one and had to use a good bit of greenstuff to repair damage. Once it is painted I think it will be okay. It isn't going to win any conversion awards but it will definitely look like a combi plasma. 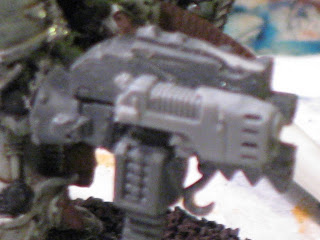 Take two, this time in all plastic. I don't have any of the plastic Chaos Terminators but I needed arms to finish off several metal terminator. I won a good bit auction on evil bay and picked of plenty of arms to finish off the terminators missing them. I had several surplus combi bolter arms and pulled this one out. I carved off  the front half and added the plasma pistol to it. I then sawed the metal combi bolter off of the arm and pinned the plastic combi bolter to the metal arm. 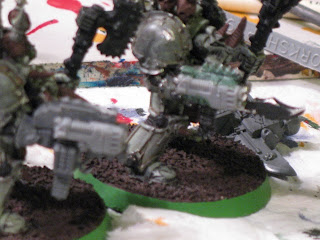 A comparison picture between the metal combi plasma and the plastic combi plasma conversion. The plastic one is slightly more bulky but close enough for me. 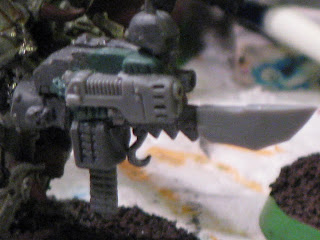 The second combi bolter after a another round of greenstuff and an ork blade added for a bayonet. I added the skull and think it will paint up fine. The plastic combi bolter was much easier to work with but it took too much effort for a single weapon conversion when I want a bunch more. 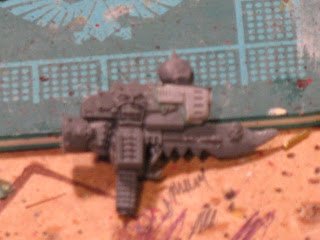 While taking a break I remembered seeing a combi plasma tutorial somewhere on the interwebs. After very little searching I came up with Galaxy in Flames Chaos Combi Bolter Tutorial. Following his tutorial I knocked out another Combi plasma. Much easier and much better looking.

Now I just need to find the other plastic chaos terminator combi bolter arms in the bits box.

I would think that the vehicle accessory sprue combi-bolters/combi-flamers would also work well for this conversion since you're adding them to existing arms.

I have some of the extra leftover vehicle combi bolter bits from when I built several of the combi flamers. I want to round a few more combi bolter arms but can use the vehicle bits as a last option.

Looks good. I've tried just about everything when it comes to making combi-weapons and I've found simple is often best. As long as it looks the part it's the way to go.