I made it out to Gaming Underground to get in a couple more 750 point games for the 40k Escalation league. I was running late so I had to wait for one of the other league player to finish before I could play. I watched James M. play against a twin tervigon tyranid army and arranged to play him when he finished. After talking to the league officials it was determined that I would be defending against James' Chaos Space Marines. 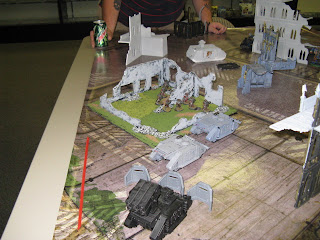 I deployed the Exorcist in the rear of my quarter behind some Aegis Defence barriers, the Battle Sister squad on an objective in the ruins, Uriah Jacobus and the battle Conclave in the second Rhino and lastly the empty Rhino as rolling cover for Uriah's Rhino. 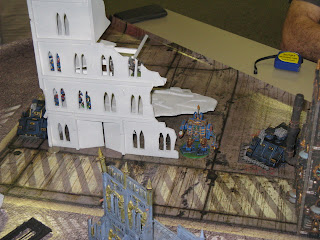 James' force consisted of a chaos marine squad in the building on an objective, the Chaos Dreadnought with a plasma cannon, the Rhino on the left had a chaos space marine squad mounted in it, a Daemon prince behind the rhino, a two obliterator squad up in the building and the other rhino was empty. The attacker normally takes the first turn according to league rules but I rolled to seize the initiative and succeeded. 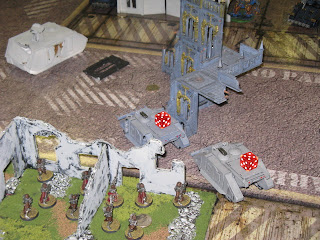 The empty Rhino leads the charges while Uriah's Rhino follows close behind. Then they both pop smoke.
The Exorcist starts it bombardment of the building targeting James' Obliterators. 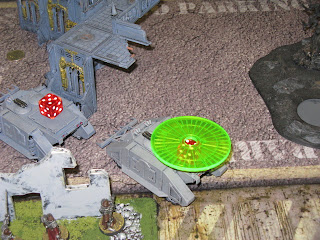 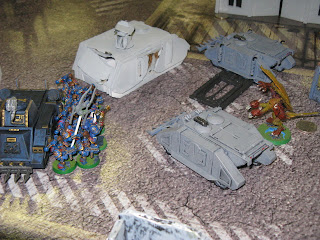 I moved up my Rhinos and James countered by deploying his Chaos Marine squad and flying his daemon prince on the other side. 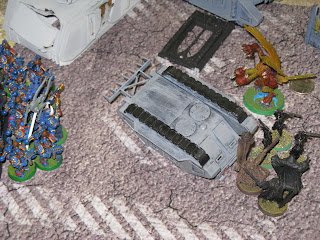 The Chaos marines meltagun the rhino and destroy it. Uriah and the Battle Conclave bail out and take cover behind the wreckage. 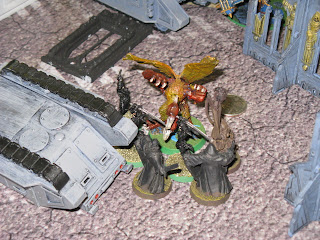 The Daemon Prince charges into the battle conclave but the Death Cultist strike first. 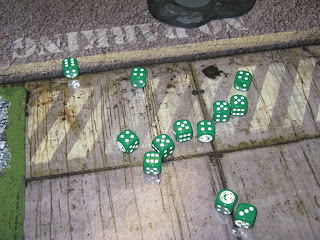 Ten out of twelve Death Cultist power weapon attacks hit but not enough to put down the daemon prince. 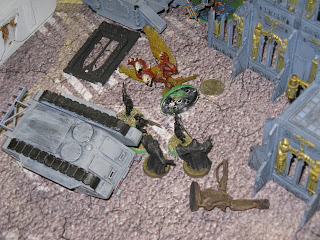 The Daemon Prince concentrates all its attack on Uriah And strikes him down, but the return attacks from the conclave lays the Daemon prince down. 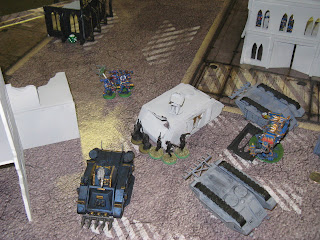 In my turn the Exorcist finishes off the two Obliterators in the building then the Battle Conclave charges into the Chaos Marine squad and drops six of them. The Chaos Marines break and fall back. In James' turn his dreadnought moves

And then he charges into the Battle Conclave. 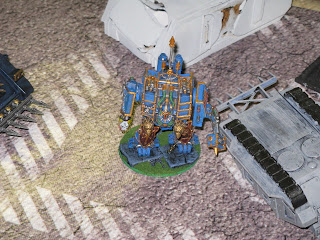 The Dreadnought wipes out the Conclave and heads toward the Battle Sisters setting on their objective. In my turn the Seraphim finally become available from reserve and then Mishap. While the Exorcist shoots and misses at James' other Rhino. In James' turn he rolls for the Dreadnought and it Fire Frenzys. Shooting twice at the Battle Sisters in the ruin and hitting with everything. Then I rolled a string of cover saves and took no casualties. This is the turning point of the game. If James hadn't rolled Fire Frenzy his dreadnought could have moved and assaulted the Battle Sister squad in the ruins and with only krak grenades to fight it probably lost. That would have took out my only troop and given James the win. 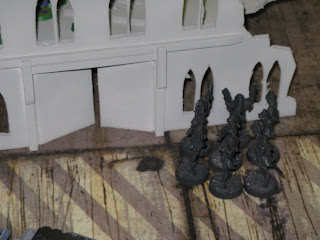 The Seraphim finally manage to make it on the table and shoot up into the building killing a couple Chaos Space Marines. 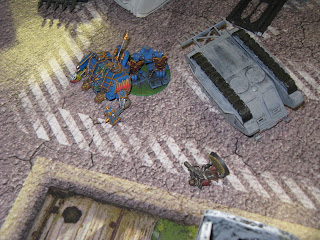 The surviving Battle Sister meltagunner moves out of cover and moves within range of the Chaos Dreadnought. The Sister fires and destroys the Dreadnought, the the ensuing explosion Martyrs the meltagunner. 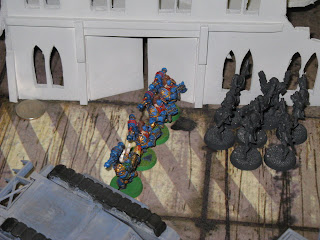 With the Dreadnought destroyed the game stands as a draw. Both of us have an objective with the center objective unoccupied. I have the Seraphim contesting his quarter and his rhino is contesting mine. James goes for the win. His Chaos Space Marines break cover shoot bolt pistols, 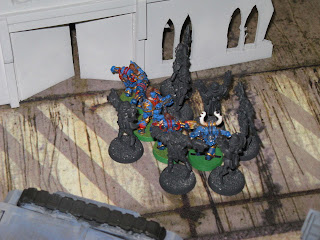 and charge into the Seraphim. 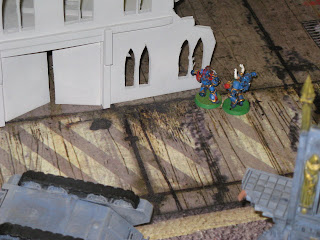 The Seraphim win the combat and the Chaos Marines break and head for the board edge. The Seraphim consolidate toward James' surviving rhino. 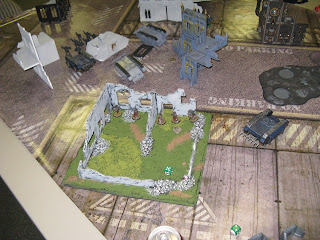 My turn the Seraphim jump behind the Rhino on the left and destroy it with Inferno pistol and the Exorcist destroys the rhino contesting my quarter, EndGame.

It was a hell of a game and went right down to the wire. James played an excellent game and it could have been anybodies game until the end. I look forward to the next time we play.

Posted by ColKillgore at 9:00 AM