21 July 2012 finally arrived and a new Games Workshop store has opened in Winston Salem, North Carolina. It opened in the Silas Creek Crossing shopping center across the road from Hanes Mall shopping center. 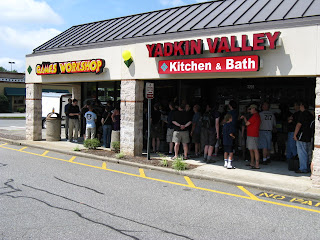 I was late showing so I ended up at the back of the line and wasn't able to get any of the freebie items. The place was packed and they were doing a brisk business. The one downfall was by the time I went to buy a deck of the new psychic cards, they were already sold out. They had apparently sold out of the card decks ten minutes after opening. 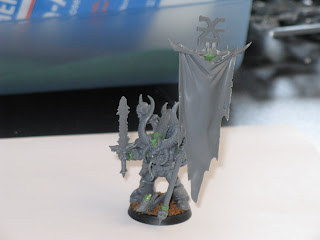 I brought an army to play in the scenario challenge but the tables were full so I set down and stared converting up a Chaos Icon Bearer for my World Eater Chaos Space marines. I spent about two and a half hours working on the figure and really liked how it came out.

They also had a painting contest running, unfortunately for me it had brought out some real artists. I consider myself a good painter but after seeing some of the freehand these guys were doing I decided to try and get in a game. 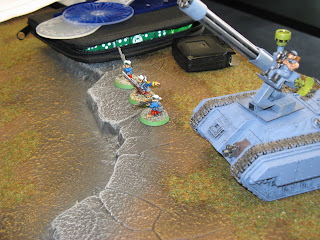 All the competitions ended at four pm so I had to rush to try and get a game in under the wire. I finally managed to get one stared against a Ultramarine player using Blood Angel rules for his army. We were playing on a two foot by three foot table so the set up was tight. i placed the Ratlings, the hydra and the heavy flamer vet squad with the Primaris on the table. I outflanked one vet squad and the scout sentinel. 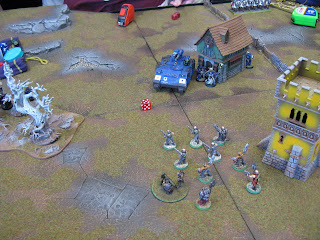 He infiltrated the scouts in the woods to the left and combat squaded the tactical squad. The Librarian and five marines were in the razorback while the other five moved up behind the building. We rolled the relic objective so both of us raced forward to try and grab the relic and make a run for the board edge. 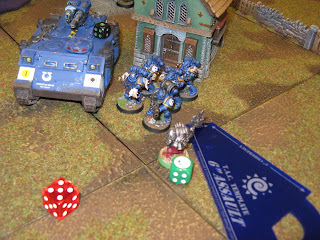 I had the vet squad gunned down with the Primaris taking a wound but he decided to go down fighting. He fired off his lightning arc power and downed a couple marines, then the Hydra and Ratlings dropped a couple more. The marines boloed their leadership and ran. That left the Librarian and another marine hiding in the razorback. 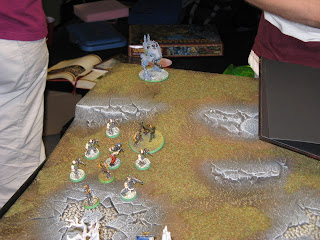 The other vet squad outflanked behind the scout squad in the woods and managed to drop all the scouts. I made a run for his deployment zone and then we had to call the game because of the time limit. We tallied up using the competition's rule sheet and the game ended as a draw. If I could have had the last two turns I think I could have won the game. It was my first game of 6th edition and I had a good time.

I seemed to be a good time all around and I met some old gaming buddies I hadn't seen in a while and made a few new ones. The best thing is that there is a Games Workshop store within a thirty minute drive of the house now.
Posted by ColKillgore at 9:30 AM

I have a few questions for you. How many tables did they have up? When are the gaming nights?

They have two 4x6 tables for gaming and one 4x6 for demo games. They are closed Monday and Tuesday and close everyday from 4 to 4:30 for lunch. The hours are Wednesday thru Saturday 1pm to 8pm and Sunday 1 pm to 6 pm.

They had a flyer with the weekly gaming nights but the only one I remember is Thursday night is the 40k night.