I have been gearing up for the Apocalypse game this Saturday at Heroes Headquarters by building several vehicles for my Imperial Guard army. If you have been following the Blog I have built two Hydra turret conversions to turn a regular Chimera into a Hydra Tank. I have several chimeras but most are painted camo green. I only have one that was shadow grey and wanted another one painted shadow grey to use as my second hydra hull. I had also started working on building a couple Griffon tanks for my Imperial guard army during the 40k league but never finished them.
So I needed a chimera and the two griffons so to the closet of miniature holding I went. I opened the two Griffon boxes and found only one with all the parts to build a complete chimera. I happened to remember an old basilisk I picked up in a job lot of tanks years ago. The basilisk was built as a chaos basilisk when the previous owner acquired it. He had removed most of the chaos symbols and spikey bits but the worst part was that the gun mount had been broken. I had cleaned up the model and did a bunch of work to cover up where the chaos bits had been removed but the gun was another matter. I had drilled, pinned, puttied and carved but the gun just didn't look right, so it had gone back into the box.
I found the old Basilisk in storage and removed the base plate for the earth shaker cannon and shortly had the Griffon mortar base inside the hull. It wasn't perfect but it was good enough for government work. I assembled the second griffon and then a chimera from the parts in the first griffon box. After a good deal of greenstuff and fitting i had everything ready for primer. 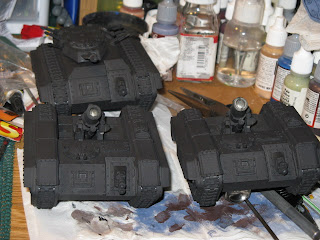 The three after primer. A funny note is that I have had the two Griffon models still in the box for over ten years, I originally bought them in an auction at the now closed Games Workshop store in Concord NC. One good thing is the primer covered many sins on the old basilisk model. 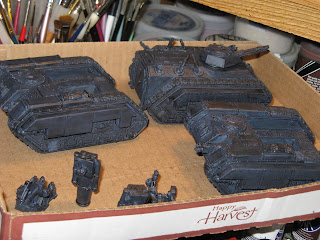 The group after a coat of Vallejo Sombre Grey and a Future/black ink wash. 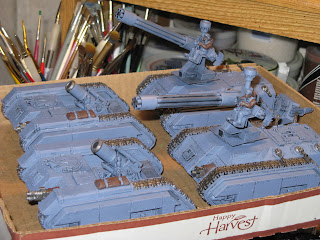 The original grey chimera with a hydra turret and the new additions to the motor pool. After letting them dry for a day, I went over them with a Vallejo sombre grey dry brush, dry brushed the metal with bolt gun metal, and then used burnt umber on all the leather. They are far from finished but they are at three colors and ready for the game Saturday.

Posted by ColKillgore at 9:10 AM